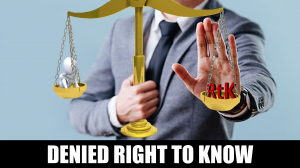 Are politicians intentionally refusing to prosecute Right to Know requests during election years?

Why is Bonta Slow-walking Privacy Law Enforcement During Election Year?

We feel there is a clear duty for Facebook to comply with RtK. They have already admitted they have much more than they have been disclosing, and have proven they can easily provide that data.”

DALLAS, TEXAS, USA, June 16, 2022 /EINPresswire.com/ — Today, Privacy Co-op, a global leader in protecting the information rights of their members since 2017, announced that appointed California Attorney General, Robert Bonta, who now seeks his first election this November to keep his job as the state’s top cop, has sidestepped a request to enforce regulations against the state’s most powerful corporation, Facebook, in a regulatory violation complaint as Facebook ignores a lawful Right to Know Request.

J. Oliver Glasgow, Privacy Co-op CEO, stated, “Last November 2021, we helped one of our members, a California resident, by making a Right to Know (RtK) request under California Civil Code § 1798.100 and 185. Our member provided a limited power of attorney, so that we could, as their Authorized Agent, make the RtK request to Facebook for all categories and classifications of data that Facebook has collected on them and their sources.”

In cases such as In re Facebook, Inc., Consumer Privacy User Profile Litigation (3:18-md-02843), District Court, N.D. California, it appears that Facebook has indeed the wherewithal and duty to respond to such requests.

Mr. Bonta was appointed to his current position by Governor Newsome and sworn in on April 23, 2021. Meanwhile, Facebook, and its owner Mark Zuckerberg have been featured prominently in recent investigations into vote irregularities and can certainly be a factor in any election. Reportedly, politicians spend up to 80% of their advertising budgets in media buys related to or directly involving Facebook and Google analytics. According to Statista, presidential candidates spent more than $170M on Facebook ads just between January and May 2020.

Mr. Glasgow continued, “We served this lawful request number CMRRR 70201290000045705046 to Facebook’s California privacy legal service address and F 286312332717 to Facebook’s Dublin privacy legal service address, respectively, and after receipt, we never heard back from them. After 45 days, we wrote up a detailed request to the California Attorney General, Rob Bonta, for his office to pursue the matter to the letter of the law, to enforce California law and compel Facebook to comply with this straightforward request as required. We sent this request to Mr. Bonta’s office by certified mail on March 18, 2022 where it was assigned to their Public Inquiry Unit as PIU:999640. It was not lost on us that we only received his 4-page form letter reply just before the primary election held on June 7.”

The law in question, known as CCPA, or California Consumer Privacy Act, (2018), confirmed the role of Authorized Agents like the Privacy Co-op to represent data concerns of California citizens and sets forth the process of making a Right to Know request (RtK).

This law will be strengthened by CPRA, or California Privacy Rights Act, which will go into effect in 2023. In cases such as In re Facebook, Inc., Consumer Privacy User Profile Litigation (3:18-md-02843), District Court, N.D. California, it appears that Facebook has indeed the wherewithal and duty to respond to such requests.

“Facebook’s lack of response to requests like this, we feel, is in violation of current law. Any Attorney General who willingly does not defend the weakest among us against the most powerful corporations by prosecuting the law in such important maters as data privacy rights is in dereliction of duty. Some may have thought that AG Bonta was simply waiting on CPRA to go into effect next year, but his own form letter to us does not indicate that. Further, CCPA is current law until CPRA goes into effect. While CPRA adds to some portions of CCPA and intends to provide further policing mechanism to collect fines and the like, it does not go into effect until January of 2023. For now, CCPA is still law that is not being enforced from our perspective,” said Mr. Glasgow.

Attorney General Bonta’s opponent in the upcoming election, Republican Nathan Hochman, did not reply to a request for comment.


EIN Presswire’s priority is source transparency. We do not allow opaque clients, and our editors try to be careful about weeding out false and misleading content.
As a user, if you see something we have missed, please do bring it to our attention. Your help is welcome. EIN Presswire, Everyone’s Internet News Presswire™,
tries to define some of the boundaries that are reasonable in today’s world. Please see our
Editorial Guidelines
for more information.