Parents who walked into A Precious Child empty-handed left with rolls of wrapping paper, stocking stuffers and Christmas presents for each of their children.

A table laden with coffee, hot chocolate, donuts and bagels greeted parents coming in before work Tuesday to sign in and pick up their children’s Christmas gifts.

“Runners,” decked out in Christmas sweaters and Santa hats, grabbed tickets and disappeared into the warehouse to match the number on the card to the gift bags holding everything from Fisher Price toys to skate boards.

Lena Sewell, whose four teenage children regularly volunteer at A Precious Child, usually has to work during this time of year, but on Tuesday had the opportunity to volunteer.

“It’s my first time being back here,” Sewell said. “It’s probably the most fun I’ve ever had.”

Rows of bicycles with bows and neatly organized piles of toys that were in the warehouse Tuesdaylikely will be cleaned out and replaced before the season is over, said Brittany Polinski, director of programs and evaluation for A Precious Child.

Wanda Vogt didn’t know until she got an email Monday that her two children, 15 and 17, would be receiving gifts. She and her son care for her daughter, who she described as medically-fragile.

“Without this, we wouldn’t have any Christmas at all,” she said. “Looking at an empty Christmas tree is no good.”

To cheer up the space, she fashioned cardboard boxes into snowmen to put in front of the tree and make it more festive. Her son did a little investigating and realized the boxes were empty.

READ  The gender gap: 'Girls shouldn't listen to anyone who says tech isn't for them'

Her daughter’s wish this year was for a movie gift card; her son wanted a gift card to Steam, an online gaming platform. They also asked for a book and a Bible.

On Christmas Eve, the family plans to go to church, bake a cake for baby Jesus and hopefully deliver cookies to a homeless man they met while helping with a toy drive in Thornton. 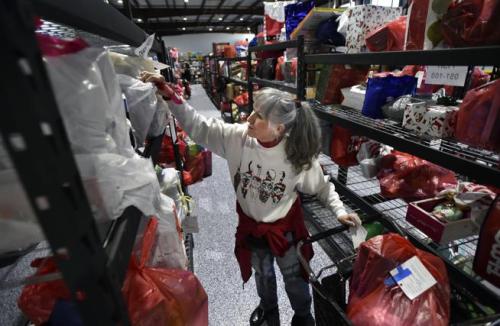 Aziel, 3, grabs a wooden toy from a bin during the annual A Precious Child giveaway on Tuesday in Broomfield. (Jeremy Papasso / Staff Photographer)

“When we can give, we try to give to others,” Vogt said, including offer to babysit or help with other household chores. “It’s important to know when you’re getting help to pay it forward.”

Vogt was grateful for the help, specially considering most donors prefer to give to younger children.

Polinski said when A Precious Child officials realized they were low on gift cards, they reached out to Mod Moms, a club supporting families along the Front Range. The group rallied and within five days had collected $3,000 in gift cards, which their companies matched, bringing the total to $6,000.

This year their goal, which they will meet, is to gift presents to 11,000 children in the metro-area counties they serve — both through their 60 partner agencies and through A Precious Child’s Resource Center, Polinski said.

About 8,500 children had been served as of Tuesday, not including the presents handed out throughout the day that will reach nearly 1,800 children.

A Precious Child distributed to its own families, as well as those for Broomfield Health and Human Services, Broomfield FISH and Emerald Elementary School.

“This is their last resort,” Polinski said about the distribution day. “These are families that weren’t able to get on a list anywhere else.”

Roughly 95 percent of A Precious Child’s clients meet low income requirements; the others are emergency situations that devastate families, such as fires.

The organization will also hold an “emergency day” of giving Thursday for the 350 children whose parents signed up within the last week.

A Precious Gift starts the day after Thanksgiving when Angel Trees go up around shopping malls and businesses, churches and individuals launch toy drives. Organizers ask that at least $50 is spent on each child, which means the nonprofit will have given out at least $550,000 in gifts this year.

At the back of the distribution room was a “thank you card station” where parents could express their gratitude in writing. Alissa Trumbull, director of development and marketing, said the nonprofit takes those to make collages for businesses or mail some directly to donors who gifted to a specific child.

“It connects them and brings everything full circle,” she said.

Each day, A Precious Child collects 5,000 pounds in donations and is using four semi trucks to stash items that don’t fit in its new 25,825-square-foot building.

“It’s a great problem to have,” Trumbull said. “We just have to have volunteers to come and sort through it.”

The new building, at 7051 W. 118th Ave., was a significant improvement on the old location, which took up several units along Burbank Street.

The Resource Center, which is filled with home goods and clothing, now feels more like a store and offers clients a more dignified experience, Nichole Karpinsky, director of volunteer services, said.

A “kids center” is in now in the same room, she said, and offers computers, books and education toys to keep children occupied while their parents shop, she said.

If the organization didn’t move, it couldn’t have kept growing, Trumbull said. Last year, it served about 44,000 unduplicated clients. This year the goal is 50,000.

Steve Katsirubas, vice chair of A Precious Child’s board of directors and CIO at Hunter Douglas, stopped by Tuesday before work to volunteer and see how the new space is handling this year’s distribution day.

His 12-year-old daughter picked an Angel Tree tag for girl of the same age to buy gifts for — a doll and makeup. He likes to get his children involved to give them perspective on families who may need help this holiday and see how hard a community works to serve its vulnerable population.

“Especially this time of year, you reflect on the selflessness of everyone here,” Katsirubas said. “It’s awesome.”

Hearthstone: Year of the Phoenix — Diving into economics and monetization

Things to Do in Dover and/or Sherborn for Dec. 23 – Enterprise News