Andrew Pyne said the online Hunts Point Company is aimed at the growing number of men who are increasingly ignored by the high street stores and fiercely fashionable e-shops.

‘A lot of the high street is struggling, as they’re chasing the fashion crowd but there’s a gap in the market for something really well made, and that the average guy can wear,’ he added. 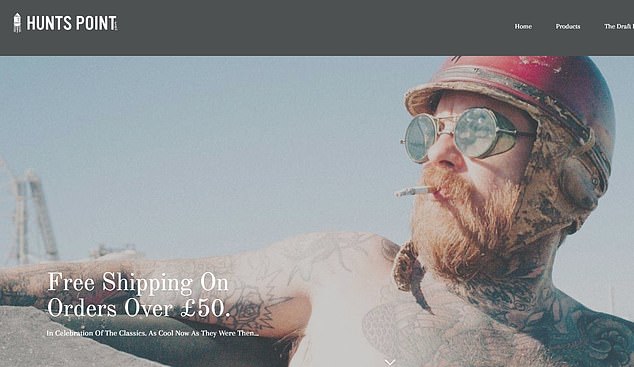 Innovation: Hunts Point, which uses organic cotton, will bring in new designs every 4 to 6 weeks

The range is based on styles sported by 1950s’ legends such as Marlon Brando, James Coburn and Dean Martin.

Pyne, who spent a decade at River Island, added: ‘The two staples of most guys’ wardrobe are jeans and T-shirts but even that isn’t very easy to buy anymore because it’s either at the cheaper end of the scale or you have to go to a super expensive brand.’

The brand launches at Huntspointcompany.com this weekend with a range of 30 T-shirts, made of organic cotton, costing £30 to £40.

Pyne said they would appeal to both middle- aged and younger men who ‘are not the fast fashion crowd but appreciate something that’s made a little bit better’.

Hunts Point, which uses organic cotton, will bring in new designs every 4 to 6 weeks. Pyne and his team have already drawn up plans to develop new ranges of sweatshirts, hooded tops and selvedge denim – a technique of manufacturing narrow, tightly woven finishes on jeans that creates a clean look.

What kind of HK sanctions would the U.S. put on China?