Fears of Brexit and Corbyn stalk the markets: Investors brace for yet another tumultuous year


Fears of Brexit and Corbyn stalk the markets: Investors brace for yet another tumultuous year 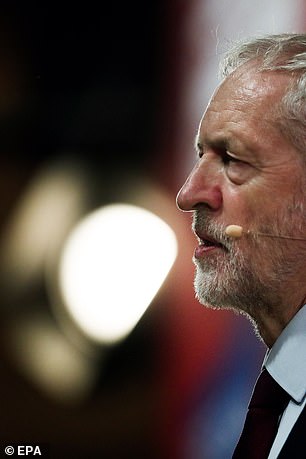 Corb threat: A Labour government was named as the top concern by 28 per cent of savers

Investors are terrified that Jeremy Corbyn will sweep to power and impose a hard-left agenda which could destroy the economy.

A Labour government was named as the top concern by 28 per cent of savers in a survey from online stockbroker AJ Bell.

The only bigger threat was a no-deal Brexit which was cited by 34 per cent of investors as the top risk of 2019.

Those concerns were echoed yesterday by Jay Clayton, head of the US Securities and Exchange Commission regulator, who said both Brussels and London must pledge to prevent market disruption if Britain leaves the EU without a deal.

AJ Bell’s report said: ‘Predictably Brexit is the biggest worry, with a third of investors putting that at the top of their list of biggest stock market concerns in 2019, followed closely by a Labour government coming to power.’

Under Corbyn’s leadership, it is feared Labour could introduce steep taxes on share trading, property and income.

The party has also threatened to confiscate 10 per cent of every business with more than 250 staff – hitting the value of savings built up in pension pots, Isas and other investments.

And a massive £500billion spending spree would cause the national debt to rocket and could see investors flee.

Read More   Steel sector at a crossroads: Any import duty hike to hurt

A senior source at a major European bank said that clients from as far away as China are raising concerns over what Labour might do in power.

The banker said: ‘Serious foreign investors are watching this with trepidation. People want to understand the possibility of their assets being seized or tax regimes being put in place that are uncommercial.’

The third biggest worry raised by AJ Bell customers was a continuing trade war between the US and China, which is widely expected to trigger a global slowdown.

The fourth and fifth top fears were rising interest rates and a slump in big technology stocks such as Amazon and Google.

Laura Suter, personal finance analyst at AJ Bell, said: ‘Politics is clearly at the top of the worry list for investors with Brexit, a change in government and Trump-fuelled trade wars being the three biggest concerns for next year.

‘Financial factors such as interest rate rises, currency movements and a tech-stock slowdown are in a distant second place,’ she added.

‘It makes a lot of sense that investors are shying away from new investments and reinvesting dividends given the political uncertainty.’

Swiss bank Credit Suisse is said to have urged investors to avoid Britain until there is more certainty about Brexit. Senior staff have reportedly been contacting clients to warn that many customers have already taken their cash abroad, and urging them to do the same.

One banking insider said many foreign firms see the UK as uninvestable at present due to Brexit turmoil. They said delays to a vote on Prime Minister Theresa May’s Brexit deal are making the problem worse.

They said: ‘The thing that’s so bad right now is the uncertainty. Clients are clamouring for certainty so that they can plan.

‘If we had a protracted period of a year like this, it would be terrible.’

Scientist behind Astrazeneca jab in line for £17m windfall

'I'm Using My Lisa to Buy My First Home'