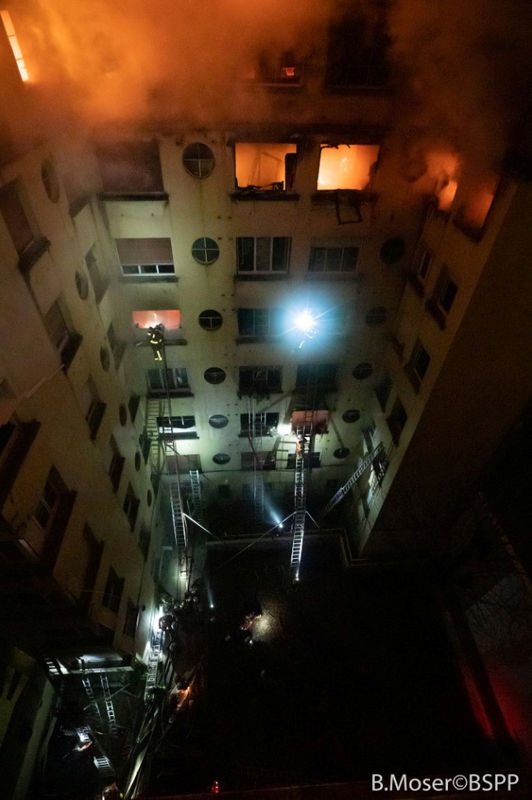 © Reuters. Firefighters work at the scene of a residential building engulfed in flames in Paris

Prosecutors said they suspected the fire was a criminal act and a woman had been detained during investigations.

Firefighters scaled ladders to rescue residents from balconies on the eight-storey block on Rue Erlanger, near the Parc des Princes soccer stadium and the Roland Garros French Open tennis venue.

Red flames roared through windows into the early hours of the morning as scores of firefighters sprayed water onto the building in the capital’s chic 16th district.

Interior Minister Christophe Castaner said around 0800 GMT that the fire was now “totally under control”.

City government official Emmanuel Gregoire said the fire began on the upper floors shortly after midnight, and that the victims were all residents.

Paris prosecutor Remy Heitz told reporters that investigators suspected a “criminal” cause for the fire and that a woman, aged 40 and known to have history of mental health problems, has been placed in custody.

Paris Mayor Anne Hidalgo wrote on Twitter that the city was in mourning after the fire which came less than a month after a gas blast in central Paris killed four people.

Disclaimer: Fusion Media would like to remind you that the data contained in this website is not necessarily real-time nor accurate. All CFDs (stocks, indexes, futures) and Forex prices are not provided by exchanges but rather by market makers, and so prices may not be accurate and may differ from the actual market price, meaning prices are indicative and not appropriate for trading purposes. Therefore Fusion Media doesn`t bear any responsibility for any trading losses you might incur as a result of using this data.
READ  View: India needs a Swachh budget with less fiscal fudging

How researchers are trying to save the Great Barrier Reef

Oil tanker attacks in the Strait of Hormuz requires an 'international response': US envoy...