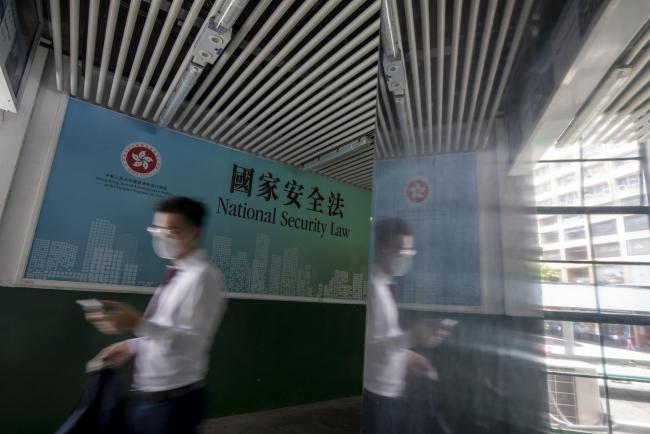 © Bloomberg. A pedestrian wearing a protective mask walks past a government-sponsored advertisement promoting a new national security law in Hong Kong, China, on Monday, June 29, 2020. The national security law that China could impose on Hong Kong as early as this week won’t need to be used if the financial hub’s residents avoid crossing certain

(Bloomberg) — A Hong Kong court has ruled that the trial of the first person charged under a broad national security law can be held without a jury, likely setting a precedent for future cases.

The Court of Appeal rejected Tong Ying-kit’s bid for his trial to be heard by a jury, a break with Hong Kong’s common law tradition. Instead, his case will be decided by three national security judges picked by Hong Kong Chief Executive Carrie Lam.

Tong’s trial on charges of incitement to secession and engaging in terrorist activities is set to begin Wednesday.

The case is being watched for signs of how the government plans to handle the security law, which allows for punishments of as long as life in prison for subversion, secession, terrorism and collusion with foreign powers. The former British colony’s independent courts and rule of law are often credited for its success as one of the world’s leading financial capitals.

The Group of Seven nations say China violated the terms of its handover agreement with the U.K. by imposing the national security law on Hong Kong last year. The U.S. revoked many special privileges granted to the city over the legislation and sanctioned senior officials who oversee the territory.

Tong, a waiter, was among several people arrested over protests held last July 1 against the legislation, which was handed down by Beijing the previous night without input from the local legislature.

He’s accused of driving a motorcycle into a group of police officers, while displaying a banner reading “Liberate Hong Kong; revolution of our times,” a popular protest slogan that authorities have banned under the security law.

The government has launched prosecutions of more than 100 people under the law, including much of the local Legislative Council’s former pro-democracy opposition. Among those charged is 73-year-old media tycoon Jimmy Lai. His Apple (NASDAQ:) Daily newspaper has said it plans to stop operations at the end of the week if the government doesn’t allow access to its cash.

Read More   Would you take a pay cut to get a better job title? It's not as stupid as it sounds | Arwa Mahdawi