Where a woman lives during pregnancy – how hot, walkable, and polluted her city or town is – may put her future child at risk for high blood pressure, a new study suggests.

A predisposition for high blood pressure is partially genetic, but environment and lifestyle choices – like smoking and poor diet – also influence these risks.

And even the details of the world us before we’re born may have effects that last through our entire lives.

Specifically, the Barcelona Institute for Global Health study found that where a woman lived, how much fish she ate, and the toxicants she came into contact with via household cleaning products were predictive of her child’s blood pressure. 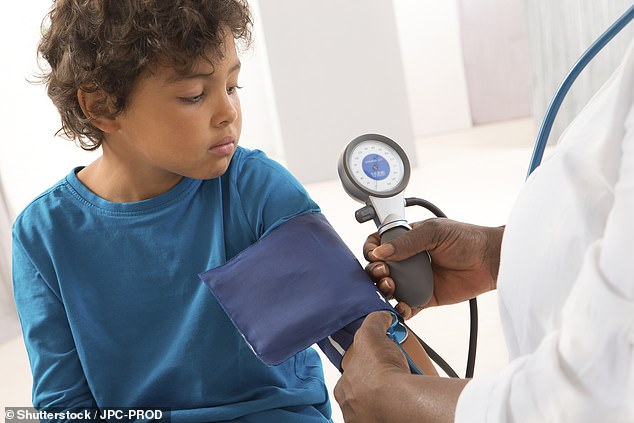 High blood pressure is widely considered one of the driving reasons that heart disease remains the number one killer of Americans and second most common cause in the UK.

Certainly, high rates of high blood pressure are i part the fault of the obesity epidemic, as red meat and processed foods are loaded with bad cholesterol that may make it harder for the heart to pump blood through the blood vessels.

But, like genetics, the environment may have effects that ripple through generations and drive blood pressure up or down.

Much of whatever a woman is exposed to during her pregnancy reaches her developing baby, as the air she breaths, food she eats and liquids she drinks go to her fetus as well.

To examine these factors, the Spanish research team analyzed data on 1,277 pairs of mother and children from the UK and five European countries.

Children in the study were between six and 11 when they blood and urine samples were examined to see if their blood pressures were high.

About 10 percent of them did, in fact have high blood pressures.

When mother lived in cities where they could walk many places, their children tended to have lower blood pressure.

A woman who has cause to walk a great deal is protecting herself from obesity and high blood pressure, benefits passed on to her infant.

And the better her heart and lungs are working, the better nutrients and oxygen flow to her developing baby.

These benefits may continue to last well after the infant is born, the new research suggests.

Secondly, the amount of fish that women ate during pregnancy seemed to have an impact on her child’s blood pressure down the line – but its effects are paradoxical.

Women who ate a lot of fish during pregnancy were more likely to have high blood pressure, as were women who ate little fish.

Researchers suspect that the ‘healthy fats’ – more specifically omega-3 fatty acids – found in fish have protective effects for the developing infants, as they do for their mothers, so women who didn’t eat much fish during pregnancy would not have reaped these benefits.

On the other hand, eating a lot of fish during pregnancy introduced another exposure that could bump up high blood pressure risks.

Many types of fish are contaminated with heavy metal – specifically, mercury.

Mercury is a naturally occurring element in the water that would be harmless on its own but its reaction with certain bacteria may turn it toxic.

Its effects are known to disrupt brain development in fetuses, and the new study’s findings suggest it may impact their cardiovascular health.

After birth, a common chemical in plastics as well atmospheric temperature seemed to influence the children’s blood pressures.

Perhaps unsurprisingly, those children who had their blood pressures taken on hot days had lower blood pressures, because blood vessels can constrict in cold weather as the body does its bet to keep blood – and therefore warmth – surrounding the vital organs.

BPA is found in many plastic products, like water bottles, as well as resins, like those that coat the insides of cans.

It’s a common and useful chemical – but exposure to enough of it over time can have some odd and problematic health effects.

BPA’s structure mimics that of the hormone estrogen.

Estrogen has a broad range of effects, including on blood pressure and blood vessels.

So, scientists think this may explain why children whose blood and urine samples had more BPA in them may have had elevated blood pressures.

The broad survey of possible exposures and their effects means that ‘this study provides a model that may greatly advance investigations of the influences of environmental exposures on human health,’ said Dr Andrea Baccarelli, a Columbia University public health professor in an accompanying editorial.

Its results underscore just how lasting the effects of experiences we couldn’t possibly remember can be on our cardiovascular and overall health.

Coronavirus latest: When will Britons stuck on quarantined cruise ship return to UK?

Lyme disease: A peculiar feeling in the head is a warning sign of the condition

How not to understand money

Parents a fat lot of good in obesity crisis as more than half think...