Construction on the Activate Mill Street Project is wrapping up in the next week or so, and organizers hope the temporary park will be open by July 27. (Daniel Monahan / Sentinel & Enterprise)

FITCHBURG — The finishing touches are being added to the Activate Mill Street, a project which will shine a light on the forgotten alleyway between Boulder Drive and Main Street when it is completed in the coming weeks.

Organizers say the temporary park will open to the public after it receives approval from the Building Commissioner, and are hoping to host their first community event next Saturday.

A kick-party was held on Thursday to celebrate the projects, its sponsors, and all of the artists contributing to Activate Mill Street. Francisco Torres, a MassDevelopment fellow working with the city, said the project will provide a boost to the city when it’s completed. 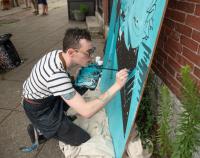 “I’m hoping it helps build a sense of community and brings people together,” said Torres. “It’ll really be a place for friends and family to hang out, and I hope for the community to work in solidarity.”

The project is still under construction but benches and other seating arrangements have already been set up, along with the stage and display cases for murals. There will also be added chairs, movable turf, and planters to add more life to the street.

One of the final pieces of the project being built right now is called “the Lantern.” According to Torres, the Lantern will provide the area with additional lighting to make the area feel safer to residents.

A major component of the projects development was revitalizing an area that was forgotten by the city. Torres said residents remember a time when the alleyway was a lively space in the city, and Activate Mill Street hopes to bring that feeling back.

“That area has been neglected for so long, it’s nice to see something that looks nice there,” said Torres.

Torres said the addition of art in the downtown area will help rejuvenate part of the city, and some of the artists involved in the project agree wholeheartedly.

Ryan Normile, an artist from Shirley and Fitchburg State grad, said he’s proud to be a part of Activate Mill Street.

“I was really enamored by the project in general,” said Normile. “I really like the idea of recreating a community based on art and culture versus wealth and business. Of course we’re trying to bring more business into the city, but I think reinvigorating the culture is a good place to start.”

Normile said he first got involved through his work as the visual designer for River Styx Brewing, which he says is at the forefront of city redevelopment efforts.

Normile said he remembers his grandparents telling him stories about how the city used to be a thriving place.

“This entire project is refining and adding a bit of polish to that little life that is left,” he said. “I think that this project is really pushing the boundaries of the beautiful community that we can create.”

READ  Why Is Northern Trust (NTRS) Up 3.7% Since Last Earnings Report? - Zacks.com

He said the art will be important to downtown because it will create a visual imprint on people’s brain, which will invite them back to the community and share the space with others.

The project is part of a partnership between MassDevelopment and the crowd funding platform Patronicity.

Through MassDevelopment’s Commonwealth Places program, the Fitchburg State University Foundation and ReImagine North of Main aim to activate the space on Mill Street.

Organizers successfully raised $40,000 and will receive a matching grant from MassDevelopment to fund the approximately $80,000 project.

Activate Mill Street will take place within the city’s Transformative Development Initiative District, which is a MassDevelopment program to drive economic growth in Gateway Cities like Fitchburg.

“We’re really trying to be the impetus for the rest of the city and what’s happening in Fitchburg,” said Torres. “This project is also kicking off the rest of the projects that we’re going to be working on in the next three years.”

Does merit matter in America? – The Tech

Earnings are the Focus – Bar Low, Beats High, Tech on the Hot Seat...