Flat-faced pups such as Pugs, Frenchies and Bulldogs are plummeting in popularity


Pugs, French bulldogs and bulldogs are dipping in popularity, as miniature Dachshunds look set to overtake them as the UK’s top tiny dog by the end of the year.

This is according to new registration statistics released by dog welfare organisation the Kennel Club.

The statistics have been welcomed by health and welfare experts who say that flat-faced – or brachycephalic – dogs can suffer from a number of health problems such as breathing and eye conditions due to their short head.

‘The dropping registrations for these key flat-faced breeds are a step in the right direction and we do welcome them, although with some caution,’ said Dan O’Neill, Chair of the Brachycephalic Working Group, which is made up of vets, national animal welfare organisations, scientists, and dog breed clubs. 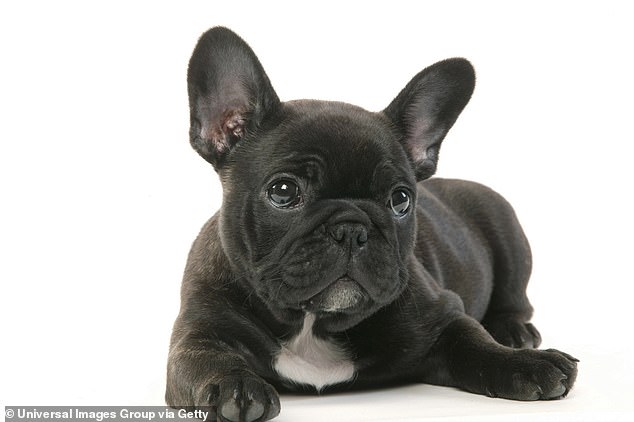 Not the top tiny dog anymore. French bulldogs are on their way down: there were eight per cent fewer registrations of French Bulldogs in the first six months of 2019

HOW ‘INBRED’ IS THE AVERAGE BULLDOG?

Researchers from the University of California compared the DNA of almost 150 British bulldogs.

The dogs were from countries as far apart as the US and Czechoslovakia – but their genes were highly similar.

As a result, the average bulldog is the genetic equivalent of a puppy born when a brother and sister who were highly inbred themselves, mated.

Writing in the journal Canine Genetics and Epidemiology, researchers warned it will be hard to find enough dogs with good genes to improve the breed’s health.

‘We hope this is a sign that more puppy buyers, owners and breeders are considering the health and welfare implications these dogs can face, especially if these dogs are bought on an impulse solely because they ‘look cute’ but with little understanding of their potential health issues, or that they are bred indiscriminately to meet demand.’

This is the first time in almost a decade these popular breeds have seen a decrease in their numbers in the UK.

At the other end of the scale, Miniature Smooth Haired Dachshunds, a breed owned by celebrities including Adele and Tanya Burr, popularised on social media and starring in many billboard and TV adverts, have increased in popularity by 23 per cent since 2018 according to the new data. 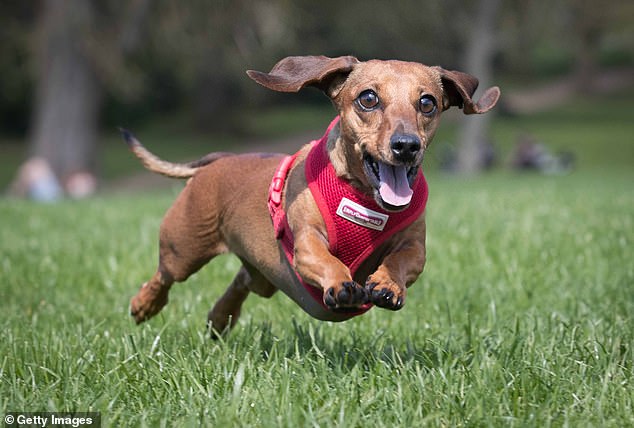 Gunning for the top place. Miniature Smooth Haired Dachshunds, a breed owned by celebrities including Adele and Tanya Burr, popularised on social media and starring in many billboard and TV adverts, have increased in popularity by 23 per cent since 2018 according to the new data

The broad head shape seen in these dogs did not evolve naturally, and is instead the result of selective breeding.

The facial structure of flat-faced dogs forces the breathing passages to be very compact.

This, along with other structural elements of the body can lead to issues that include:

– Excess noises such as snorting and snoring

– An elongated palate, which can cause episodes of reverse sneezing which can consist of excessive gasps and wheezes

Brachycephalic breeds – often referred to as flat-faced dogs due to their short head – can suffer from a number of health problems such as breathing, eye and skin-fold issues. These health issues, coupled with the welfare issues that stem from filling the high demand through irresponsible high-volume breeding and importing from abroad, have created one of the most pressing welfare issues for dogs in the UK.

In 2017, the BWG penned an open letter to advertisers urging them to avoid using flat-faced dogs as promotional aids in the media. More recently, the group assisted and advised Disney to help mitigate the potential negative health and welfare consequences their film, Patrick the Pug.

READ  Pangolins may have spread coronavirus to humans

‘There are still thousands of flat-faced dogs being bred outside any umbrella of influence by irresponsible breeders and being bought by poorly informed owners,’ said O’Neill. ‘The flat-faced dog issue is not yet solved. 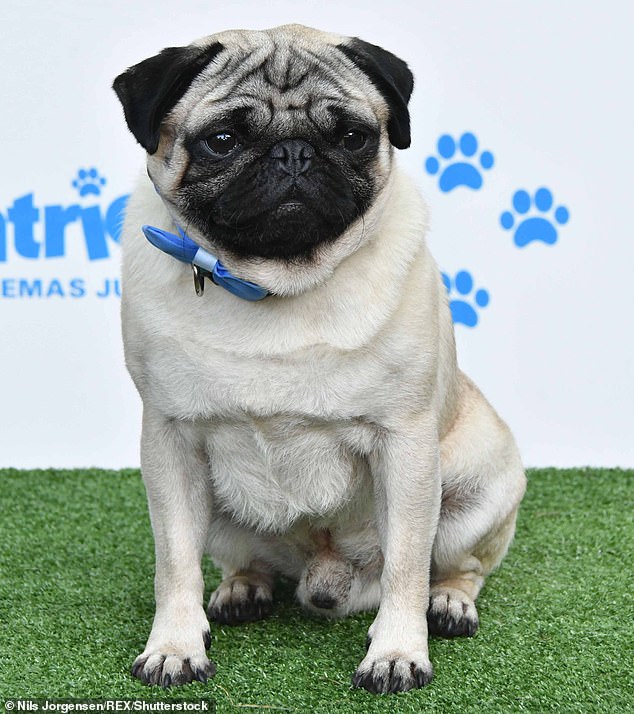 The Brachycephalic Working Group, made up of vets, national animal welfare organisations, scientists, and dog breed clubs, has assisted and advised Disney to help mitigate the potential negative health and welfare consequences their film, Patrick the Pug

And it’s not all good news with the rise of Daschunds, either.

‘Dachshunds are an in-demand breed with their own health issues,’ according to the British Veterinary Association. ‘As the demand for them has continued to grow so too has the prevalence for spinal and neurological issues associated with elongated backs and shorter legs.’ 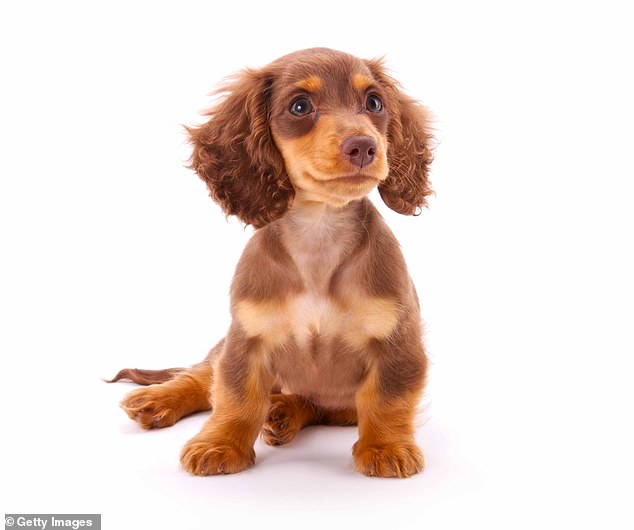 Dachshunds are an in-demand breed with their own health issues, according to the British Veterinary Association.’As the demand for them has continued to grow so too has the prevalence for spinal and neurological issues associated with elongated backs and shorter legs

‘Extremes of conformation in any animal are a cause for concern so we continue to urge puppy buyers again to really consider their decision before they buy a puppy, instead of choosing a dog because of fashion,’ says O’Neill.

Bill Lambert, Senior Health and Welfare Manager at the Kennel Club and member of the BWG said: ‘We encourage all puppy buyers to think very carefully about any puppy buying decision, but especially if they are thinking of getting a flat-faced dog. We hope the new figures are a sign of this message getting through and that there are now fewer, better-informed owners buying from responsible breeders who are doing all they can to breed healthy puppies. 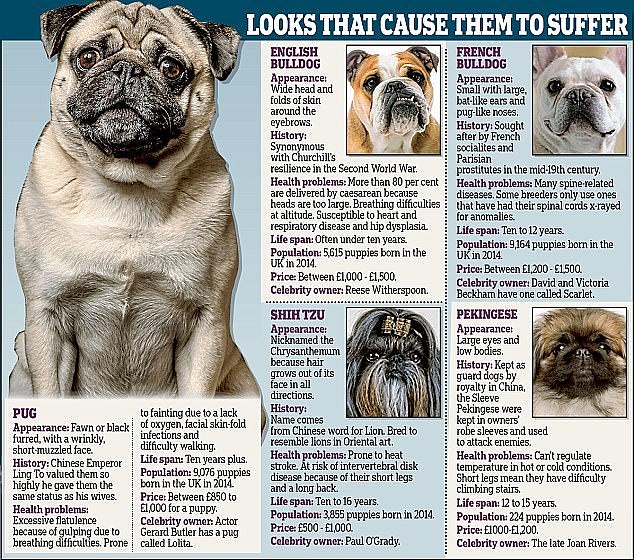 HOW DID DOGS BECOME DOMESTICATED?

A genetic analysis of the world’s oldest known dog remains revealed that dogs were domesticated in a single event by humans living in Eurasia, around 20,000 to 40,000 years ago.

Dr Krishna Veeramah, an assistant professor in evolution at Stony Brook University, told MailOnline: ‘The process of dog domestication would have been a very complex process, involving a number of generations where signature dog traits evolved gradually.

‘The current hypothesis is that the domestication of dogs likely arose passively, with a population of wolves somewhere in the world living on the outskirts of hunter-gatherer camps feeding off refuse created by the humans.

‘Those wolves that were tamer and less aggressive would have been more successful at this, and while the humans did not initially gain any kind of benefit from this process, over time they would have developed some kind of symbiotic [mutually beneficial] relationship with these animals, eventually evolving into the dogs we see today.’

WHAT ARE THE TEN COMMONLY HELD MYTHS ABOUT DOGS?

It is easy to believe that dogs like what we like, but this is not always strictly true.

Here are ten things which people should remember when trying to understand their pets, according to Animal behaviour experts Dr Melissa Starling and Dr Paul McGreevy, from the University of Sydney.

2. Not all dogs like to be hugged or patted

3. A barking dog is not always an aggressive dog

4. Dogs do not like other dogs entering their territory/home

5. Dogs like to be active and don’t need as much relaxation time as humans

6. Not all dogs are overly friendly, some are shyer to begin with

7. A dog that appears friendly can soon become aggressive

9. Sometimes a dog isn’t misbehaving, it simply does not understand what to do or what you want

10. Subtle facial signals often preempt barking or snapping when a dog is unhappy

SpaceX: How long will Demo-2 stay on the ISS? When will NASA astronauts return to Earth?

How Students are Helping to Save Coral Reefs – Masterstudies News