The head of the UK’s armed forces has urged private sector cyber specialists and data engineers to sign up as reservists to help fill gaps in the military’s tech capabilities.

General Sir Nick Carter, chief of the defence staff, is preparing for an era of stealthier, tech-enabled warfare as set out in Downing Street’s defence, security and foreign policy strategy for post-Brexit Britain.

But the new plans have also prompted personnel cuts to help invest in new digital capabilities such as artificial intelligence and cyber. As the regular force is pared back and the demand for tech expertise rises, skilled reservists will be increasingly needed.

“I think where we would like to get to is that we no longer distinguish between regulars and reservists particularly . . . that we have a spectrum of commitment from full to part-time service,” he told the FT, arguing that skilled personnel should be able to “move seamlessly” between civilian jobs and short-term defence deployments.

He now has the task of implementing a demanding new strategy that promises to deploy “more forces overseas more often and for longer periods of time”. The departure last month of the HMS Queen Elizabeth aircraft carrier on a seven-month voyage to the Indo- Pacific — where the UK will increase its military presence to help counter China’s growing navy — has put British defence in the spotlight.

Back at home, the “massive pace” of technological development is driving changes in the military that Carter admitted he did not see coming. Both China and Russia have potent cyber capabilities, while Beijing is investing heavily in military applications of AI.

But the cutting-edge skills needed to compete are often found in the private sector rather than the military’s own ranks.

“If you’d asked me five years ago how many data scientists and data engineers we wanted, I probably would have thought you were teasing me,” Carter said, adding this is now something he is “focused on”.

Military reservists from the private sector have been deployed widely during the Covid-19 pandemic, helping to build the Nightingale hospitals and organise the distribution of PPE.

More recently, he said, data analysts from industry worked together with a team from the Defence Science and Technology Laboratory to help map a network of Isis fighters in the Middle East and “hone in” on a particular individual.

‘Call of Duty’ for real

The Ministry of Defence might not need niche tech experts full time, or be able to afford them on permanent contracts, and Carter insisted there are mutual benefits from private sector employers releasing staff for deployments of three to six months.

“We can provide that individual with opportunities that they might not get in the private sector,” he said, suggesting it would offer people the chance to move beyond gaming and “do ‘Call of Duty’ for real”.

Reservists are paid by the MoD while on loan, and civilian salaries are matched in some cases, subject to a cap.

Carter would not say how many private sector specialists he wants to recruit, and since the announcement in March that the Army will be cut from a target force of 82,000 to 72,500 by 2025, numbers have been a sore point for Britain’s defence chiefs.

“I always have been frustrated by the fact that ill-informed people think you can measure the capability of the Army . . . on the basis of the total number of regular headcount in it,” he said, arguing that this ignores the additional impact of the reserve force. The Army currently has a reserve force of around 30,000, which includes former military personnel.

“I’d rather talk about the Army [having] 100,000 human beings available at three months’ notice to move, but they also have 15,000 robots who are able to complement their activities,” Carter said.

A key difficulty is finding the right balance between new kit such as robotics and traditional symbols of hard power. The defence review trumpeted flagship assets such as Britain’s nuclear capability — announcing a 40 per cent increase in the warhead stockpile — and the country’s two aircraft carriers, but also promised investments in space technology and high-speed missiles. 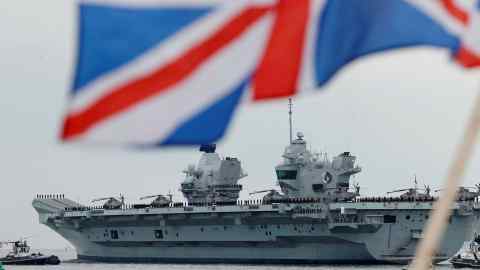 Even with a surprise defence spending boost last autumn of £16.5bn, money will be tight: critics have suggested the strategy set out several options, but left many of the hard decisions unresolved.

Carter disagreed. “For the first time in my memory, we’ve got the ends, the ways and the means, in balance,” he said. “There are not many militaries in Nato who are able to be as clear about that as we are.”

Rising threats have given urgency to the need to upgrade and reform. The armed forces chief revealed that Russia sent 11 warships, including a submarine, into British waters last November.

Russian jets are “regularly” seen in UK airspace. The sightings in November were, he said, “more ostentatious than anything we’ve seen since the end of the cold war”, adding that this gave rise to the risk of “unwarranted escalation” and miscalculation, which could lead to conflict.

Through the Belt and Road Initiative, Beijing is “increasingly appearing in parts of the world which it didn’t used to be in”, Carter said. “Whether that’s parts of Africa that we used to hold dear, whether it’s a huge embassy that they’ve built in Antigua, a Commonwealth country, whether it’s conversations they’re having in Argentina, they are spreading their wings,” he said.

The armed forces chief is due to step down from that role in late November, but first he must secure the withdrawal of British troops from Afghanistan, in line with the US decision to leave by the 20th anniversary of 9/11. Carter — who was deputy commander of Nato troops during his final Afghanistan tour — has already expressed regret at this move, saying it was “not a decision we had hoped for”. He admitted his fears that the withdrawal could spark instability, and said he is in regular dialogue with Afghan contacts about the country’s future.

As for his own future, the general refuses to be drawn on who his successor might be (the leading candidates are the First Sea Lord Admiral Tony Radakin and head of strategic command General Sir Patrick Sanders). Instead, Carter retorts that he still has six months left in post, and there is plenty to be done. “We are not in a position that the king is dead yet,” he said.