By Jonathan Chadwick For Mailonline

A newly-discovered fly fossil has been named after the Korean pop hit ‘Gangnam Style’ for its resemblance to the popular accompanying dance move.

It looks a lot like a modern wasp or hoverfly – with a black and yellow ‘yellowjacket’ pattern  – but is twice as large as a common house fly.

It displays the distinctive crossing of the arms in the so-called ‘Gangnam Style’, as popularised by South Korean pop star PSY in 2012.

The finding suggest that PSY can’t lay claim to this move – at least as far back as 100 million years ago. 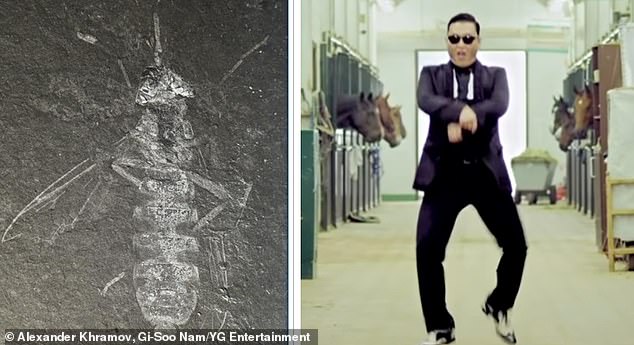 WHAT ARE THE THREE GEOLOGIC ERAS?

The Mesozoic Era is a the name given to the period from 250 million to 65 million years ago.

The era is divided into three major periods: Triassic, Jurassic and Cretaceous.

The new species discovery dates back to the Cretaceous period – 145 million to 66 million years ago.

READ  'Groundbreaking advance' in flu treatment could save thousands of lives, research suggests

Mesozoic was the age of the dinosaurs and lasted almost 180 million years.

The Mesozoic Era followed the Paleozoic Era, during which arthropods, molluscs, fish and amphibians all evolved.

Mesozoic was followed by the Cenozoic Era, during which the continents assumed the configuration that we know today.

The insect was part of the now totally extinct Zhangsolvidae family, which was common during the Mesozoic period – between 250 to 65 million years ago.

‘There were several lineages of long-proboscid flies during the Mesozoic, and all they were initially associated with gymnosperms.,’ said lead author of the study, Alexander Khramov, a senior researcher at the Borissiak Paleontological Institute in Moscow, Russia.

‘Some managed to survive into our time, while others disappeared, probably due to their inability to adapt themselves to angiosperm-dominated worldss.

‘Why zhangsolvids were destined to lose, we cannot explain yet.’

B. gangnami is the first record of Diptera – the order of winged insects commonly known as flies – from the Lower Cretaceous Jinju Formation of the Korean Peninsula, Jinju city in South Korea.

The species has been described based on six fossil specimens, the largest number of fossils known for a single species of Zhangsolvidae. 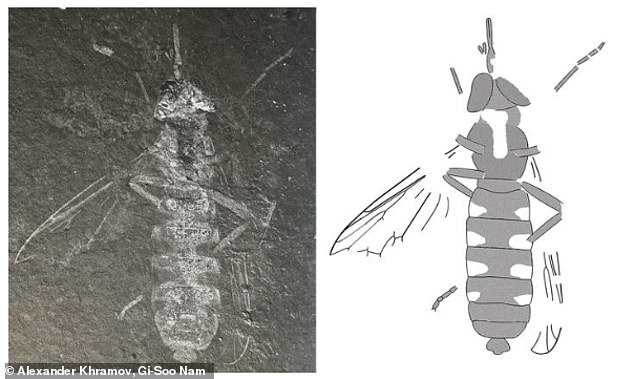 It’s the third known species of Zhangsolvidae – with ‘extremely elongate antennal flagella’, all the better for doing it Gangnam Style.

It had a 5mm long tubular mouth, known as a proboscis, and a darkish abdomen featuring four pairs of light spots.

While it looked like a wasp, scientists say wasps were rare at the time and have concluded it was either mimicking another unknown insect or wasps had spread further than they previously thought.

READ  Volcano warning: Campi Flegrei near Naples may be gearing up for eruption, warn experts

Members of this species were on average twice as large as today’s common house fly and were more similar to today’s modern wasp or hoverfly, which are part of the vespid family. 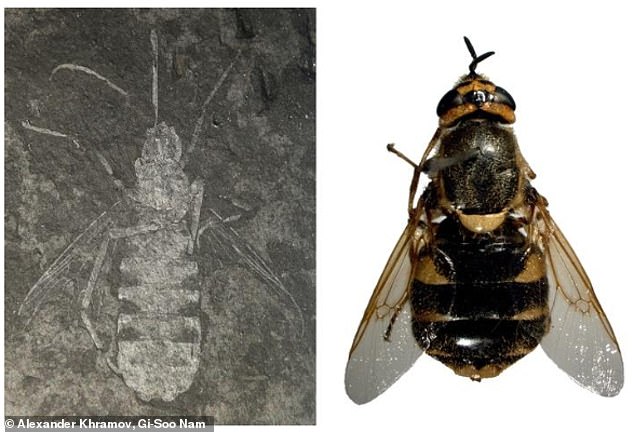 B. gangnami and the related living wasp mimic fly Stratiomys

However, judging by the fossil record, vespid wasps were rare during the Mesozoic period and B. gangnami most likely mimicked wasps using their long proboscis to detract predators.

The new species has been described in Alcheringa: An Australasian Journal of Palaeontology.

How Financial Models Could Move Bitcoin’s Price After Halving – CoinDesk