gBeta Startups Get Their Moment in the Spotlight – businessjournaldaily.com


YOUNGSTOWN, Ohio – The six startup companies in the first cohort of an accelerator program run by the Youngstown Business Incubator and gBeta celebrated their graduation by pitching their companies to investors, mentors and community members at the Tech Block Building No. 5 Thursday night.

While all were celebrating, one – Prophit.ai – may have been a bit happier than the rest, as it was announced the machine-learning technology company had received an invitation to join the Acceleprise program in New York City,

“The announcement came early this morning and it’s so exciting that they have found an investor,” said gBeta director Patrick Bailey.

The startups work closely together in the seven-week program to grow their companies, understand market sizes, choose a revenue model and learn how to pitch to investors.

GBeta is free for early stage companies, hosted in 18 markets in the U.S. and Canada and is part of the nationally ranked accelerator program Gener8tor.

Prophit.ai applies advanced machine learning technology to help prevent U.S. corporations from overpaying $30 billion in errant sales taxes each year. The company now moves to its next journey in the Acceleprise software as service program.

Prophit co-founder Rob van Haaren told the audience that the company developed an algorithm that can prevent tax overpayments with subscription software, which is currently being used at five companies.

Van Haaren said testing has shown a 97% accuracy rate and can determine the overpayments in 1.04 seconds, as opposed to external tax consultants performing reverse audits up to four years later, who also charge extra fees.

Evan Schumann is the U.S. lead for Loginno, which converts container fleets to Internet of Things-enabled fleets. The potential low-cost device his company makes allows smart containers to be tracked in real time, preventing delayed and lost cargo. The company uses software and hardware that can track cargo similar to express shipments.

Grale Technologies, Youngstown, is an automated integrated metrology (AIM) system that enables machine tool owners to quickly and accurately characterizes a component’s key engineering requirement in real time. Grale’s AIM System can achieve a 52% increase in gross profit and an 88% increase in net profit before tax, the company says.

Visual Earnings emerged out of Humtown Products in Columbiana and engages employees through gamification to increase productivity when performing repetitive, measurable tasks. After implementing Visual Earnings, a customer’s projected loss of $1.4 million became a profit of $112,000. The turnaround was driven by a 400% increase in productivity and 27% higher production volume with only 26 workers instead of 152.

Thrive Neuromedical develops consumer technology products to enhance brain development in infants by using consumer products of a speaker, mobile application and an IoT-enabled pacifier solution that allows a baby to engage in exposure to foreign languages to stimulate cognitive advantages in the brain.

Abby Taubner is a partner in Gener8tor and attended Youngstown’s first pitch night. While gBeta programs have been held across the Midwest – other cities have included Detroit, Cincinnati and Indianapolis – the partnership with YBI brought many firsts, she said.

“This is the first time we’ve had the unique partnership of gBeta and YBI,” Taubner said. “They are able to provide tools and resources and have the only ceramic 3D printer with innovative companies with existing portfolios.” 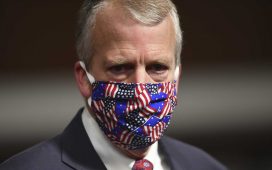