Two big Detroit automakers said Wednesday that the worldwide shortage of computer chips had weighed on their third-quarter earnings, but there were signs that the worst of the disruption was behind them.

Of the two, Ford Motor fared better. Its revenue fell about 5 percent from a year earlier, to $35.7 billion, while General Motors’ revenue declined 25 percent, to $26.8 billion.

“The quarter was challenging due to continuing semiconductor pressures,” G.M.’s chief executive, Mary T. Barra, said in a letter to shareholders.

A statement from Ford emphasized a brightening outlook. “Semiconductor availability remains a challenge, but markedly improved from the second quarter,” it said.

Ford investors were also upbeat. The company’s shares rose 8 percent after Ford’s announcement, which came after the closing bell. General Motors gave its report before the market opened, and its shares ended the day down 5 percent.

Modern automobiles require dozens of computer chips — largely made in Asia — for a wide range of electronic components such as engine controllers and infotainment systems. With chips scarce because of pandemic-related manufacturing and transportation issues, G.M. halted production temporarily in August and September at plants across North America, including several that make its highly profitable pickup trucks and large sport utility vehicles.

While G.M. was hit harder by the chip shortage than Ford in the third quarter, Ford had greater struggles earlier in the year because of one of its key chip suppliers was also slowed by a fire at a factory in Japan.

Ford forecast further improvement in the fourth quarter, although the tight supply of chips is likely to dog the auto industry for some time. “I expect the constraints on chips to remain fluid through 2022 and could extend into 2023, but we do expect the severity to reduce,” Ford’s chief financial officer, John Lawler, said in a conference call with reporters.

The production constraints have left dealers with slim inventories of new vehicles. In the quarter, G.M.’s new-vehicle sales in the United States fell by a third.

One upside for the automakers is that vehicle prices have risen, increasing the profit on each truck or car sold. Both companies raised their profit forecast for the year, and Ford said it would resume paying a dividend in the fourth quarter. Neither company has paid a dividend since the pandemic hit the United States last year.

Almost anything manufactured is in short supply. That includes everything from toilet paper to new cars. The disruptions go back to the beginning of the pandemic, when factories in Asia and Europe were forced to shut down and shipping companies cut their schedules.

First, demand for home goods spiked. Money that Americans once spent on experiences were redirected to things for their homes. The surge clogged the system for transporting goods to the factories that needed them — like computer chips — and finished products piled up because of a shortage of shipping containers.

Now, ports are struggling to keep up. In North America and Europe, where containers are arriving, the heavy influx of ships is overwhelming ports. With warehouses full, containers are piling up at ports. The chaos in global shipping is likely to persist as a result of the massive traffic jam.

Ford reported $1.8 billion in net income for the three months that ended in September, compared with $2.4 billion a year earlier. G.M.’s profit was $2.4 billion, down from $4 billion.

G.M.’s profit could have been even weaker, but it included a $1.9 billion payment from the battery supplier LG Electronics that was related to a large recall of Chevrolet Bolt electric cars. And comparisons with last year were made more daunting by the unusually high demand for cars early in the pandemic.

In a conference call with reporters, Ms. Barra said she had met with a number of semiconductor suppliers to improve G.M.’s supply of computer chips. “We are specifically working on a strategy to make sure that we are not seeing these types of constraints in the medium term and certainly in the long term,” she said.

G.M. needs to continue ringing up large profits because it is investing heavily to develop new electric vehicles and to build plants to make them. Ms. Barra said a new battery plant in Ohio — a joint venture with LG — would begin production next year.

G.M. plans to introduce 30 new electric models around the world by 2025, including 20 in North America.

Ford is also making a big E.V. push, including an electric version of its top-selling F-150 truck. It announced last month that it would spend billions of dollars to build three battery factories and an electric truck plant in the United States, creating 11,000 jobs over the next four years. 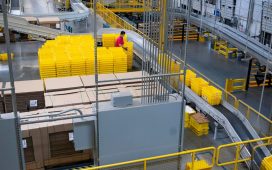 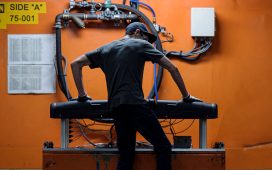 US adds 210,000 jobs in November ahead of discovery of Omicron variant 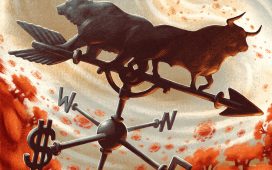 The Markets Are Confused, but Wall Street Is Still Making Predictions