Germany tumbles into recession as global trade tensions, disruption to car industry and worries over Brexit take their toll

By Hugo Duncan for the Daily Mail

Germany has tumbled into recession as global trade tensions, disruption to the car industry and worries over Brexit take their toll, according to the country’s central bank.

In a major setback for Chancellor Angela Merkel and the wider eurozone, the Bundesbank said the German economy contracted again in the third quarter of the year.

That followed a decline in output of 0.1 per cent in the second quarter – leaving the single currency bloc’s largest economy and traditional driving force in recession. 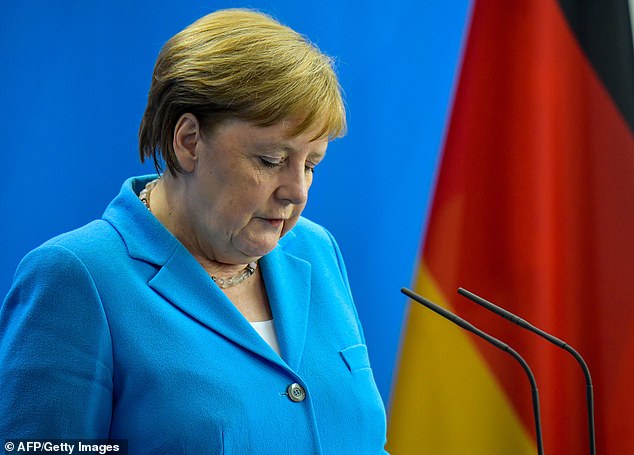 Struggle: In a major setback for Chancellor Angela Merkel and the wider eurozone, the Bundesbank said the German economy contracted again in the third quarter of the year

‘Germany’s economic output could have shrunk again slightly in the third quarter of 2019,’ the country’s central bank said in its monthly report.

‘The decisive factor here is the continued downturn in the export-oriented industry.’

Warning that this downturn was starting to cast a shadow on the rest of economy, the Bundesbank added: ‘Early indicators currently provide few signs of a sustainable recovery in exports and a stabilisation of the industry.’

The troubles affecting Germany come amid weakness across much of Europe – including the UK. However, while the British economy also contracted in the second quarter, by 0.2 per cent, it is expected to have returned to growth in the third quarter, staving off recession.

The performance of the British economy since the Brexit referendum in June 2016 has made a mockery of claims by Remainers that a Leave vote would tip the UK into recession and lead to as many as 820,000 job losses. Instead, employment has risen by 946,000 since the vote, and unemployment is below 4 per cent at levels not seen since the 1970s.

But with cracks emerging in the global economy, the International Monetary Fund has warned of a ‘synchronised slowdown’ around the world, underlining that countries face deeper problems than Brexit. The IMF has cut its global growth forecast for this year to 3 per cent down from 3.6 per cent last year and the weakest since the financial crisis a decade ago.

Despite warnings over the impact of Brexit, Britain is expected to grow faster than Germany, France and Italy in 2019 and 2020.

Former IMF boss Christine Lagarde, who is taking over as head of the European Central Bank, said Brexit would cause damage across Europe.

‘Everybody will be a little less well-off as result,’ she said.

What are the different types of candlesticks?

Light at the end of the tunnel! Dalal Street showing signs of a rebound