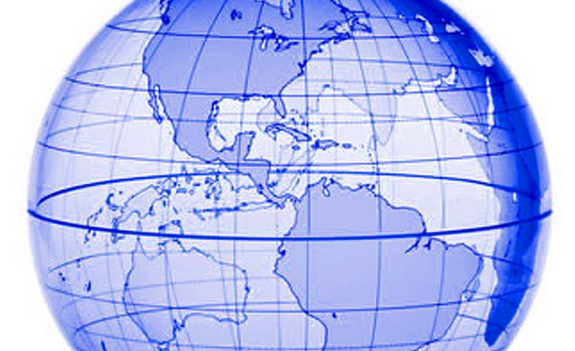 Dividends are never out of fashion for income-seeking investors, and the latest Janus Henderson global dividend index reveals shareholders received record pay outs in the second quarter of the year.

Rio Tinto, Nestle and Sberbank of Russia are the world’s biggest dividend payers in the period, while pay outs from companies in Japan, Canada, France and Indonesia hit new highs.

According to Janus Henderson, global dividends hit an eye-watering $513.8 billion in the quarter, but the firm warns that growth is slowing. The amount paid out by global businesses was up 1.1% compared to the same quarter last year. By comparison a year ago growth had reached a heady 14.3%.

Fluctuating foreign exchange rates have had a significant impact on dividends, according to Henderson, while a slowdown in global growth has also had an effect.

Ben Lofthouse, head of global equity income at Janus Henderson, says: “Global dividends have been growing very quickly over the past two years, so the slowdown is not a cause for concern.” 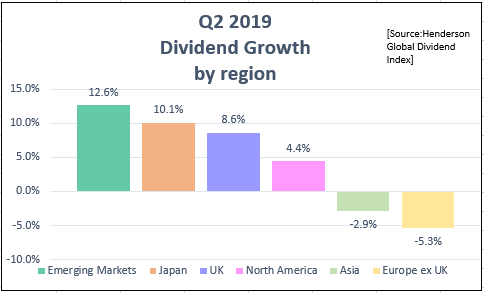 US firms have not historically been big dividend payers, but pay outs were up 4.4% in the second quarter of the year. While the ongoing trade war between the US and China has weighed on sentiment and created uncertainty for businesses, a strong dollar has been a boon for many investors.

While US tech giants Apple (AAPL) and Microsoft (MSFT) featured among the top 20 dividend payers in the period, the tech sector as a whole saw a modest decline in its pay outs in the second quarter. Total pay outs were $35.5 billion, down from $36.6 billion a year ago – but that’s still double the $17.1 billion paid out just six years ago in the second quarter of 2013.

While the overall pace of growth in the US has slowed, it is Canada in that has propelled the region’s dividend growth. Double-digit dividend growth from Canadian companies helped North American dividends to a record $132.9 billion in the period. On a headline basis, Canada doesn’t look like a major contributor – overall dividends totalled $11.1 million – but it’s a sharp rise of 10.6% from the $10.2 billion paid out in the second quarter of 2018.

While Asia lagged slightly behind the rest of the world, Japan bucked the trend. Dividends from Japanese firms rose more than 10%, helped by a strong Yen. Indeed, the Japanese currency has been a traditional safe haven for investors in times of uncertainty – such as the financial crisis, when it climbed by more than 20% – and has rallied once more amid the US/China trade war.

Three-quarters of Japanese firms increased their dividends during the period, paying out a record $39.6 billion during the period. Pharma giant Takeda (4502), which last year bought UK firm Shire, was among the biggest contributors, offsetting a dividend cut from investment group Nomura.

With Germany on the brink of recession and Italy facing the prospect of another general election, it is perhaps no surprise that Europe continues to underperform the global average. Dividends in the region were down 5.3% from a year ago on a headline basis.

A weaker euro has been a major contributor to the decline and the slowing autos sector dragged on overall figures as both BMW and Daimler cut their pay outs.

France was the strongest performer on the continent, with special dividends from Natixis and Engie (ENGI) and booming profits at luxury group Kering (KER) leading the way. Pay outs from French firms totalled $51 billion in the period, up 3.1% from a year ago.

While Brexit and a weaker pound are weighing on the UK’s economic prospects, businesses are booming. A large proportion of FTSE company earnings are from overseas so profits get a boost from they are converted back into sterling when the pound is weak. So, while the UK may be out of favour with many investors, those with skin in the game have enjoyed dividend growth of 8.6%.

That figure does, however, mask a number of cuts: Centrica, Marks & Spencer, Royal Mail and Vodafone have all cut their pay outs in recent months. That’s been offset by special dividends from mining giant Rio Tinto (RIO) and from Royal Bank of Scotland (RBS), which announced this month it would pay its first dividend since the financial crisis.

Indeed, the UK’s largest banks have changed dramatically since the financial crisis: they are better capitalised, very tightly regulated, and are now back to being decent dividend payers. HSBC (HSBA) ranks seven in the list of world’s biggest dividend payers.

Emerging market dividends saw the fastest growth, at a rate of 12.6%, albeit was a low base. Companies across the region paid out $35.8 billion in the second quarter of the year. Russian companies accounted for $7 billion of that, with Sberbank (SBER) the third biggest dividend payer worldwide.The strong performance of the bank has not escaped the notice of investors. The five-star rated Invesco Emerging Europe Equity fund has some 9.2% of its assets in the stock and Baillie Gifford Emerging Markets Growth 3.9%.

A further $5.5 billion came from Indonesia, where the banking sector was the most generous dividend payer. But the fastest growth came from Colombia, where Ecopetrol (ECOPETROL) hiked its payout by 2.5%, thanks to rising profits.

Henderson’s Lofthouse adds: “The impact of the global economic slowdown is greater in some parts of the world than others, with Europe seeing a particular impact. But this is why taking a global approach to income investing is so valuable.”

Asian stocks and US futures fall

Tweet Buster: How to handle NBFC crisis and navigate the market now