It’s lunchtime on a drizzly wet Wednesday. I wander into the beautiful St Mary Abbots Church in London’s Kensington for a little divine inspiration and relief from the incessant rain. A building that exudes calmness, kindness and serenity.

There’s a ‘Eucharists of Healing’ service scheduled for early afternoon and I’m tempted to stay and think about those close to me who are struggling to shake off life’s slings and arrows – a 91-year-old aunt recovering from a nasty fall and a nephew struggling to come to terms with the death of his caring and deeply religious mother. But deadlines press.

Outside, the children of the adjoining school are noisily enjoying their lunch break. All rather endearing. Life enhancing. 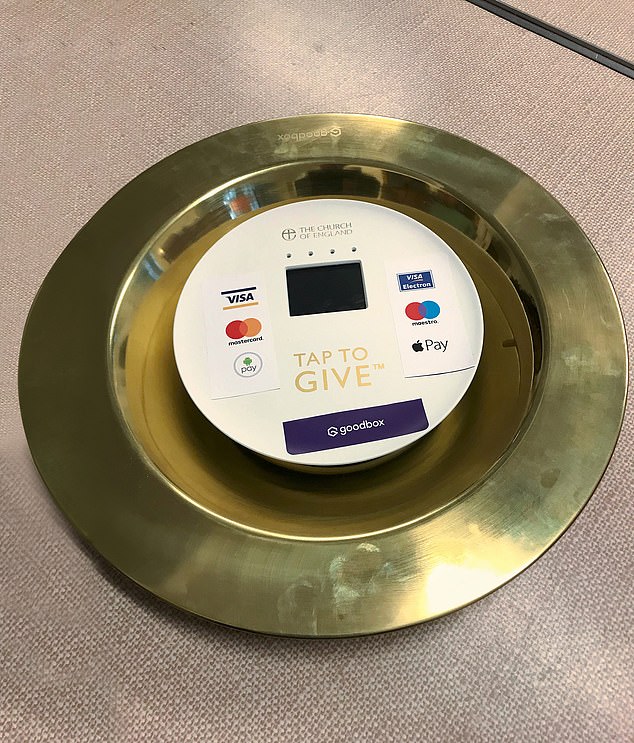 Heaven sent: The collection plate that takes both cash and cards

As I look for a pew to sit down in and contemplate for a moment or two, my eye is immediately drawn to a device atop a plinth, emitting a blue light. More 21st Century high tech than anything else inside the church’s peaceful walls. It’s a contactless card reader with a simple but compelling message: ‘Please support our beautiful church.’

In less time than it takes to say the first 20 words of the Lord’s Prayer, I’ve waved my Visa debit card across it and made a donation to this glorious church on my doorstep. Immediately, I feel a little more righteous, refreshed and ready to face the challenges of the afternoon.

St Mary Abbots was the first church in the country to embrace new payment technology in March last year. This was in response to a 50 per cent decline in cash donations over five years.

Now churches up and down the country are increasingly turning towards contactless card payments – and other forms of non-cash based donations – to stop their income falling off a proverbial cliff.

Our manifesto to make banks listen

The Mail on Sunday has drawn up a ‘Keep Our Cash Manifesto’ to force banks and financial authorities to tackle the crisis. Our key demands are:

It’s a direct consequence of congregations – and church visitors – carrying less cash, resulting in dwindling plate collections at services. A shortage of cash triggered by restricted accessibility to it – stemming from a shrinking free-to-use ATM network and the rampant closure of bank branches – and the rise of contactless payment.

To survive, churches have no choice but to adapt to the modern world, even if for some it cuts across religious ideals. Sink or swim. It’s the same with art galleries, museums and even enterprising buskers using the same payment card readers to boost donations from visitors.

Earlier this year, a report on the country’s access to cash, compiled by Natalie Ceeney (former head of the Financial Ombudsman Service), warned of the imminent death of cash unless action was taken to protect it. Although she welcomes the increasing use of cards, direct debits and mobile phones to make payments, she believes cash needs to stay (see below).

On a positive front, the use of new contactless ‘collection plates’ has certainly helped boost donations to churches. According to fintech company SumUp, one of the suppliers of the new card readers, some churches have seen overall donations almost double as a result of embracing the new technology – in a matter of just months.

But the new machines are not without their drawbacks, with churches having to pay for the readers to be installed, incurring a transaction fee on any donation made (reducing the sum they ultimately receive), and then having to wait a while for the card collections to come back into their coffers.

For example, transaction fees can range between one and 2.95 per cent while a card reader can cost anything up to £250 to purchase.

The delay in the money coming back to the church, minus any fees, can range from two to 90 days. Apart from SumUp, providers include Goodbox, Payacharity, Swedish-owned iZettle and Square. 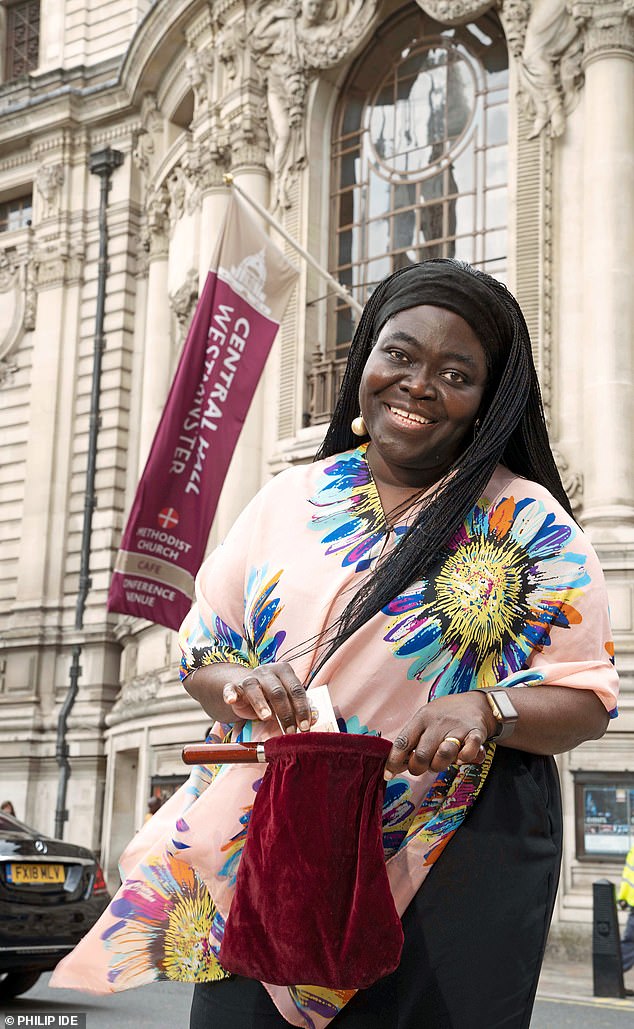 In the bag: Ama Ackah-Yensu says using a card reader is a no-brainer on financial grounds

Most disadvantageous of all, the vast majority of the card readers are not yet sophisticated enough to enable users to indicate they are taxpayers, thereby qualifying their donation for Gift Aid which would boost the amount a church receives by 25 per cent.

At most churches (including St Mary Abbots), envelopes are left on the seats of pews for members of the congregation to put their cash donations inside. Provided they give their full name, address and date of donation, the church can claim Gift Aid on top.

Churches are also keen to get members to donate via standing order and Christian charity giving schemes such as Stewardship – both Gift Aid friendly. So, both are better financially for the churches than card readers.

Ama Ackah-Yensu is church treasurer at Methodist Central Hall Westminster, located within an order paper’s wave of the Houses of Parliament. She is currently looking at whether the church should introduce card readers similar to the ones St Mary Abbots and the nearby Westminster Cathedral have installed.

An accountant by profession, she says the decision to install a card reader is a no-brainer on financial grounds. At big events such as the church’s Christmas carol service that can draw in 2,000 people, she says the church loses out ‘significantly’ as a result of people turning up without any cash to give.

‘Most people want to give,’ she says, ‘but many don’t carry cash any more. All rather frustrating.’

The church, she adds, has to raise tens of thousands of pounds a year just to stand still – to pay staff as well as carry out vital work in the community, helping the homeless, the impoverished, those with mental health issues and supporting parents who have lost children in early infancy or as a result of a miscarriage.

Yet Ackah-Yensu says there are also moral issues to consider. ‘I know nothing is free when it comes to banking, but I do worry about banks and other financial organisations profiteering from the near cashless society we have become. Especially when that money making is at the expense of organisations such as ours, whose overriding objective is to do good and support our local communities.’

Back at St Mary Abbots, I manage to track down head verger Simon Fitter, positively beaming as a result of a gift of some beautiful lilies from a passer-by. He declares the card readers (there are three of them in the church, one out of operation) a great success – generating £200 a week for the church.

‘A lot of tourists visit our church and have no cash on them,’ he says. ‘Before, they would walk out, having not made a donation. Now, they’re happy to wave their card in front of our readers and give us a little.’

Interestingly, the card reader’s default payment Monday through to Saturday is £3, with users able to press a button to increase their donation to a maximum £30. But on a Sunday, the church’s busiest day with six services and some 400 people turning up to pray and reflect, the minimum payment is ratcheted up to £10 (provider Goodbox does it remotely). As the book of Proverbs proclaims: ‘Honour the Lord with your wealth, with the first fruits of all your crops.’

Before I leave, Simon shows me the church’s latest payment gadget yet to make its debut – a card reader set inside a collection plate, allowing the congregation to choose between a cash donation or one via contactless payment. ‘Good, isn’t it?’ he asks. It is rather, providing people the payment choice Ceeney is pressing for. Hallelujah.

Later on I get a call from Daniel Jones, chief generosity officer of Stewardship, a Christian charity that enables people to make regular donations to a charity giving account – and then direct the money to specific Christian causes. ‘Contactless payment is not the future,’ he says. ‘It’s just part of it, as is cash.’

Spot on Mr Generosity Officer. Cash is not king, but it remains an important cog in the turning of the economy’s wheels that must be preserved at any cost.

Sandip Sabharwal on what to buy if the market falls further

10 tips to boost your credit score and avoid mortgage rejection

Boss of Goldman Sachs calls working from home an 'aberration'