Fears are growing that the UK’s carbon dioxide shortage will soon lead to empty shelves, as food producers urge the government to step in and provide support.

Ian Wright, CEO of the Food and Drink Federation, told the BBC’s Today Programme this morning that it is “a real crisis”, explaining that supply chains are under unprecedented pressures.


We have been saying for several weeks now that the just-in-time system which underpins both our supermarkets and our hospitality industry is under the most strain it’s ever been in the 40 years it’s been there.

Poultry producers are warning that production will erode seriously by the end of this week, Wright says, and the same is true of pig production — both sectors need CO2 to stun animals for slaughter.

Bakery goods and meat packaging is probably only a week behind, he predicts.


We probably have about 10 days before this gets to the point where consumers and shoppers, and diners, notice that those products are not available.

Wright adds that ministers, particularly in DEFRA, take the problem extremely seriously…. he’s hopeful, but not confident, that the industry and government can work together on a solution.

He has written to the secretary for food and rural affairs, George Eustice, urging action.

In a letter seen by the Guardian, Wright says:


“Across industry there is a united view that the situation is worsening, with little prospect of additional CO2 supply unless the UK government intervenes.”

The carbon dioxide shortage is being caused by the gas crisis, because CO2 is a byproduct of fertiliser production.

The surge in natural gas prices has forced the US fertiliser maker CF Industries to halt production at its plants in Billingham in Teesside and Ince in Cheshire last week — creating disruption across supply chains.

The FDF say the government must take three steps to support the food industry:

Meat producers are also warning that supplies could be disrupted soon. Cranswick, which makes fresh pork products and gourmet sausages, bacon, ham and and charcuterie, says the UK risks a “major crisis in the food industry”.


The sector has been asking for support to ease the labour crisis, and now C02 shortages could effectively bring production to a halt throughout the supply chain.

“The industry is already at tipping point ahead of the demanding Christmas period.

We have worked tirelessly throughout the pandemic to keep food on the shelves, but there is a real risk of product shortages across the country if the Government does not act immediately to address these issues.”

As the energy crisis intensified yesterday, the government insisted that the UK was “highly resilient”, with “no question of the lights going out”.


“There will be no three-day working weeks or a throwback to the 1970s.

Such thinking is alarmist, unhelpful and completely misguided.”

But No 10 has been warned that hundreds of thousands of Britons face a “very, very difficult” winter thanks to rising household costs fears of a three-day week for factories and further gaps on supermarket shelves.

And with supermarket chain Iceland warning that UK food supplies could be under threat long before Christmas unless carbon dioxide supplies are restored, pressure is mounting…

We also get the OECD’s assessment of the world economy, a healthcheck on UK factories from the CBI, and the latest US housing data – as the Federal Reserve starts its two-day monetary policy meeting.

After heavy falls yesterday, European markets have opened higher, as investors shake off some of Monday’s gloom following the worst session in a couple of months.

BofA Gets Boost From Loans as Consumers Start Borrowing Again 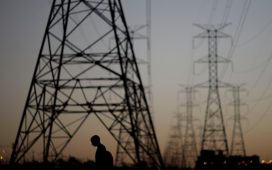