NEW DELHI:Vodafone Group CEO Nick Read apologised to the Indian government for his strong comments regarding the company’s joint venture, saying his remarks were distorted.

“The coverage in India has been distorted and I apologise for the impression that the coverage conveys. It doesn’t accurately represent my comments,” Read said in a letter to the Prime Minister, telecom minister Ravi Shankar Prasad and senior government officials.

Read reiterated the company’s desire to continue operations in India and appreciated “the setting up of the committee of secretaries to look into potential remedies and their considerable effort.”

The letter was written after top government officials expressed disapproval and displeasure over the tone and tenor of Read’s comments on Tuesday, a senior official told ET.

“I would like to express my gratitude to the Indian government for designing a relief package in the light of the recent AGR (adjusted gross revenue) judgment and the financial stress the telecom industry is undergoing,” the CEO wrote in the letter, which ET reviewed. Explaining his earlier statements in London, made while declaring the company’s quarterly results,

As reported by ET on Wednesday, the committee of secretaries has suggested reducing the annual licence fee to 5% of AGR from 8% and giving a two-year moratorium to telecom companies for payment of spectrum dues. This means Vodafone Idea’s spectrum payment dues worth Rs 24,000 crore – the highest among the three private operators – will deferred, freeing up cash for operational and capital expenditure.

Reiterating the telco’s commitment to India, Read said, “You have my word that Vodafone wishes to continue its long history in India given the right conditions.”

He said the company strongly believed in the country’s potential, its telecom sector and transformative potential for its citizens, which is closely aligned with the Digital India vision. “We remain invested in India growth story and it continues to remain a key market for us,” he said. Communication and technology have great potential to transform lives, create jobs and property for all and India is seeing it in action in Digital India, Read said.

Vodafone said it had written off the carrying value of its share in the lossmaking joint venture, Vodafone Idea. Read had reportedly said, “If you’re not a going concern, you’re moving into a liquidation scenario – can’t get any clearer than that.” 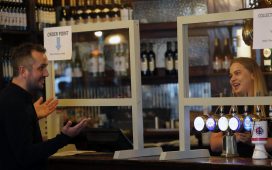