Half as many children died before age five worldwide in 2017 as did 20 years prior, a new report reveals.

Important gains were made in all but one low- to middle-income countries, that bear a disproportionate amount of the burden for childhood mortality.

But childhood deaths increased in war-torn Syria, and children in some of Africa’s poorest countries are more than 50 times more likely to die by age five than those in Finland.

And at this rate, billions of people around the globe will still not have the 17 basic needs for a decent life – like clean water, reliable food, and gender equality – by 2030, the Bill and Melinda Gates Foundation warns in the new report. 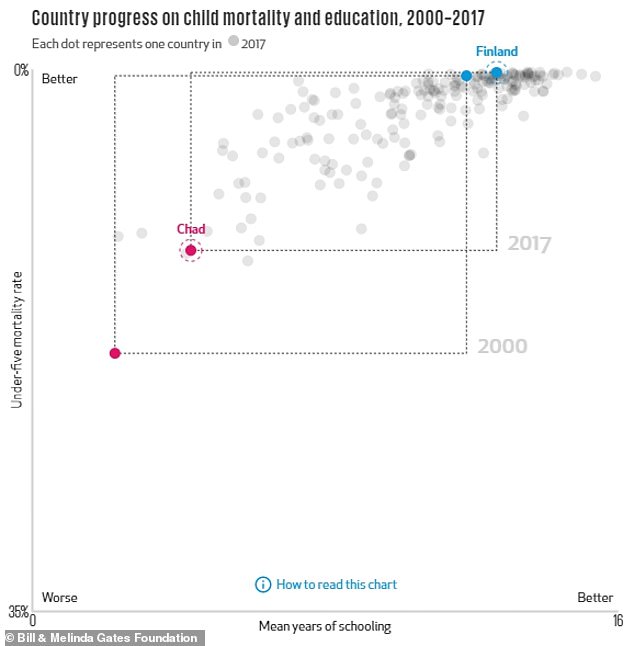 Huge gains have been made for children’s survival and educational attainment in the worst-off country in the new Gates Foundation report (Chad, in pink), but death risks remain over 50 times higher there than in Finland, a graph shows

The exponential gulf between childhood mortality in one of those African countries, Chad, and that in Finland is just one of many nearly unfathomable disparities from country to country.

Even within the same country, people in some countries have twice as many years of education, on average, as those in other counties in the same nation.

And those disparities divide even further along gender lines.

Even in the US, the world’s 11th wealthiest nation, women still make just 78 to 82 percent what men do, on average.

In Sub-Saharan Africa, girls get two fewer years of schooling than boys do on average.

Worldwide, 21 percent of girls married before the age of 18, and they spend three times as many hours doing house work or caring for the children or elderly of the family.

And 26 percent fewer young women will join the work force.

Once a girl in the world becomes pregnant, she also faces the risk of death in pregnancy or delivery.

Maternal mortality fell by over 40 percent between 1990 and 2019, but we continue to lag behind the UN’s 2030 goal for maternal deaths substantially.

The number of those women’s children who die as newborns has fallen, but slowly.

In fact, because there have been quite substantial decreases in the number of children dying under age five – inclusive of newborns – the rate of neonatal mortality is actually rising.

Nearly half of all children that die under age five now die within the first 28 days of their lives.

And health problems faced by newborns, such as premature birth or low birth weight are far and away the most common causes of childhood mortality, accounting for over 1.6 million annual deaths.

By comparison, pneumonia, the second most common cause, kills half as many children.

The advent of vaccines has given children far better odds of surviving to adolescence and adulthood.

But this year, a series of measles outbreaks around the world – including one in the US which was ‘the worse in a generation,’ according to the new Gates report – was a sobering reminder of how fragile that protection can be.

READ  Coronavirus: Will the outbreak end in warmer weather? Expert reveals if virus is seasonal

The situation is far more dire in other countries as well. In Sub-Saharan Africa, over half of babies too young to have completed their vaccination against measles live in areas were less than 80 percent of the population is vaccinated.

Despite gains, there is still much room for improvement to help capture ‘human capital,’ which the Foundation calls ‘the best way for a country to unlock productivity and innovation, cut poverty, create opportunities and generate prosperity.’

Human capital is an economist’s term for the combination of skills, knowledge and experience that a person or group can contribute to their society.

But before those attributes can be brought to the table, people must have the basics in place: food, water, their health.

‘Investments in human capital today help people increase their incomes tomorrow. But without human capital—that is, for those who are unhealthy and uneducated—it is virtually impossible to escape poverty,’ wrote the Bill and Melinda Gates Foundation report authors.

Coronavirus UK: R-rate still near one as death toll hits 37,837

What is the current R rate in my area? How to track it every day

About 7% have had coronavirus, says ONS survey