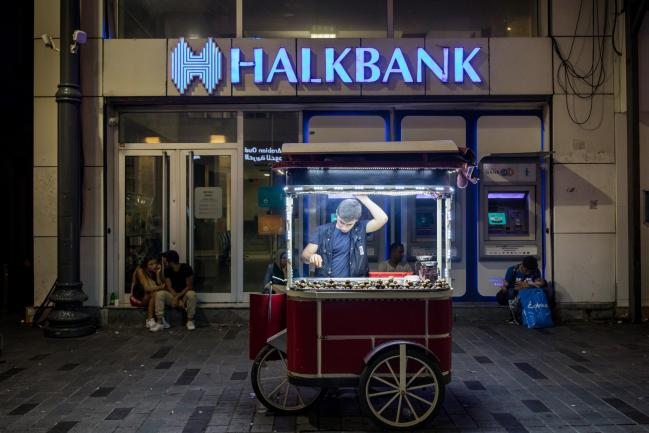 (Bloomberg) — Halkbank fell by the most in more than six months in Istanbul after the U.S. brought a criminal case against the state-owned Turkish bank for allegedly aiding a scheme to evade sanctions against Iran.

Turkiye Halk Bankasi AS (OTC:), as the lender is officially known, dropped as much as 7.4%, the biggest intraday decline since March 27, even after the exchange imposed a short-selling ban on shares in seven banks. The stock was 3.7% lower as of 10:43 a.m. in .

Halkbank’s slump underscores the increasing pressure on the Turkish economy and assets as the row with NATO ally the U.S. over Ankara’s decision to send troops across its borders into Syria deepens. The indictment against Halkbank was filed Tuesday in a Manhattan federal court and overlaps with increasing calls from U.S. lawmakers from both parties for President Donald Trump to punish Turkey severely for its military offensive.

Wednesday’s market reaction extended beyond the lender’s stock. The yield on Halkbank’s July 2021 dollar surged more than 450 basis points on Wednesday to 13.9%. That’s about double the yield on the similar-dated debt of some of its peers, a sign that investors are beginning to price in financial distress.

The bank last sold bonds overseas in July 2016 and last raised a syndicated loan from international lenders in December 2015.