Hand sanitizer will NOT protect you from flu – but washing your hands will, scientists discover


Even medical professionals trust hand sanitizer to protect against various germs, including the flu – but a new study suggests we shouldn’t trust the beloved gel.

Scientists at Kyoto Profectural University in Japan found that the flu can a slather of hand sani when the virus is in mucus, like what be expelled by sneeze.

Even after two minutes of soaking in the alcohol-based disinfectant, the virus was still alive.

The brave volunteers who let scientists put flu-infected mucus on their hands had to keep rubbing the sanitizer around their hands for four minutes to totally squash the virus.

The scientists advise that washing with warm water and antibiotic soap while thoroughly rubbing your hands together can kill the flu in 30 seconds. 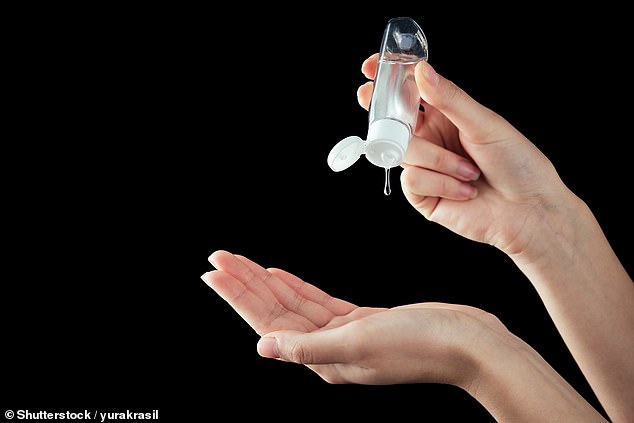 Not so fast with the sani: New research found that even two minutes of rubbing alcohol-based sanitizer on your hands does not kill the flu virus – but 30 seconds of hand-washing will

Some seasons are worse than others and different strains dominate different years.

Typically in the US, the flu virus starts to be active in October.

But this year, there has already been one death from flu. A four-year-old child in California who had underlying health conditions who died earlier this month.

‘We should never forget that the flu still kills,’ said Dr Cameron Kaiser, County Public Health Officer for Riverside, where the child died.

‘I always recommend people get their flu shots every year, but a death so early in the flu season suggests this year may be worse than usual.’

The flu shot may protect you from the virus – which is mostly deadly for elderly people, children and those with other medical condition, but can turn fatal for healthy adults in bad seasons – but hand sanitizer is unlikely to.

Most hand sanitizers are made using a form of alcohol.

Some contain antibiotics compounds, which are more likely to kill bacteria, but are useless against viruses like influenza.

Alcohol, on the other hand, is an antiseptic and can kill viruses – in the proper conditions.

To test whether these sanitizers work against the flu, the Japanese researchers gathered samples of mucus from infected patients.

Then they analyzed the activity of the virus in those samples in petri dishes, crucially, while it was still wet. Other studies have examined such samples after they’ve already dried.

They noticed that, in the lab, alcohol was less effective against flu the wet samples than it was against dry spit samples.

But the lab is one thing. The scientists wanted to see how sanitizer would work against the flu in real world conditions.

So they convinced 10 volunteers to let them dab their fingertips with the flu-infected spit.

While you might not willingly go dipping your hands in flu, this test really isn’t far off from how the virus spreads.

Flu is transmitted from one person to the next through tiny wet droplets sprayed when infected people sneeze, cough or talk.

Mouth covering is helpful, but an imperfect preventive measure.

And if you happen to be standing in line near someone with flu, or perhaps riding the train, there’s a good chance their illness may make them sneeze or cough in your general direction.

In the absence of a bathroom, hand sanitizer seems like an obvious on-the-go remedy.

But when they’d been dabbed with wet, viral spit, even two minutes of rubbing their hands with sani didn’t fully deactivate the flu.

It took four monotonous four minutes to kill off the virus.

The researchers put this down to viscosity.

Mucous has a slightly slimy, sticky texture and chemical structure.

This insulates the flu virus because it takes longer for the alcohol to work it’s way through the viscose spit.

On the other hands, a simple, thorough 30-second session washing your hands can quickly and effectively eradicate the flu virus in any spit spray you may have unwillingly and unwittingly come into contact with.

Covid: Number of patients on ventilators passes 4,000 for first time

‘They were freaking out’: meet the people treating NHS workers for trauma

Covid US: 10 out of 4m who got Moderna vaccine suffered anaphylaxis

Does the Covid vaccine contain penicillin