A hat that zaps the scalp with a built-in patch that produces electricity on its own may combat male balding, scientists hope.

A trial of the device on the balding father-of-one of the researchers has proven it can work – helping him regrow hair within a month.

Other experiments on rats found it worker as effectively, if not better, than drugs used to treat hair loss. No side effects were seen.

The 1mm-wide patch sends electric pulses to the scalp when triggered by motion, promoting natural hair growth chemicals in the skin.

The University of Wisconsin researchers said the electric pulses are only gentle, and shouldn’t be uncomfortable to put up with.

The team are now designing a baseball cap which contains a patch that encases the whole scalp in the aim of trialling it on more men. 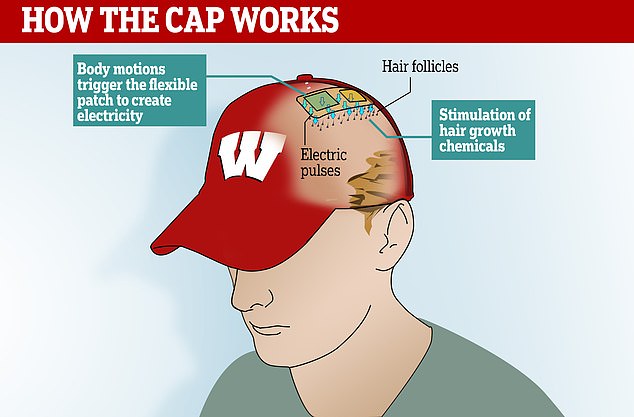 The hat contains a built-in patch which sends electric pulses to the scalp when triggered by motion, promoting natural hair growth chemicals in the skin 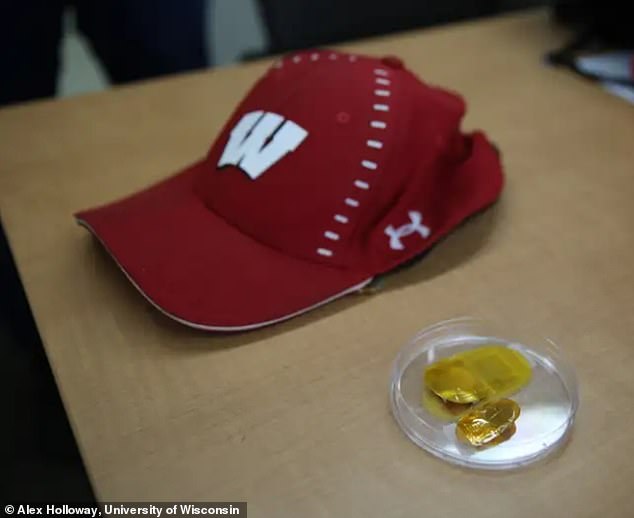 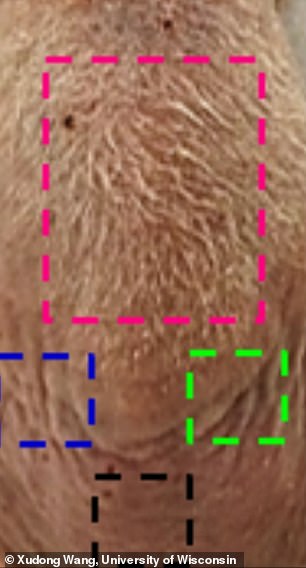 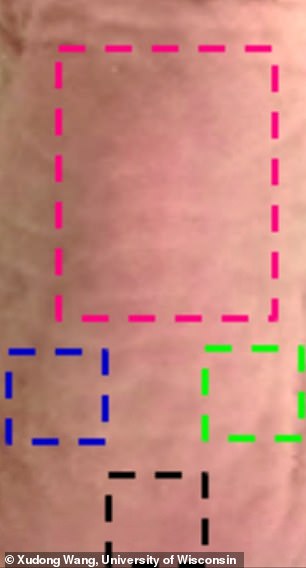 Engineer Dr Xudong Wang and his colleagues created the patch, but electric pulse treatment has been studied – and used – for years.

According to New Scientist, Dr Wang has tested the patch on his father, who has been balding for several years.

‘It helped him to grow a lot of new hairs after one month,’ he said.

‘Small head movements during normal daily activity should be enough to power the device.’

HOW DOES ELECTRICITY PROMOTE HAIR GROWTH?

The gentle electric pulses penetrate the outerlayers of the skin, deep enough to stimulate the hair follicle but shallow enough to avoid damage to the deeper tissue.

There are clinical trials proving their efficacy to promote hair growth in dormant follicles.

Researchers in Canada in 1990 found a 66 per cent increase in hair count in men who received a form of electric pulses once a week for 36 weeks.

Mr Wang’s study on rats suggests the electric current causes an increase in growth factors or ‘proteins’ necessary for hair to grow.

There are already treatments on the market that use electric pulses, but a patient needs to fit the criteria.

But it’s not a very practical treatment at the moment, because patients may have to sit under wired up to a machine for several hours at a time.

The patch, made of a flexible piece of plastic, vibrates with electricity when it senses body movement.

Materials inside the plastic patch produce an electrical charge when they come into contact and rub together – known as the ‘triboelectric effect’.

The patch was attached to the backs of rats who had been shaved in the laboratory, in one study published in the journal ASC Nano.

Hair grew more rapidly than in other patches of skin which scientists had applied a standard balding treatment, minoxidil lotion, or placebo.

In rats with no hair due to a genetic deficiency, the patch caused 2mm of hair growth underneath the patch, compared to 1mm from minoxidil.

The hair density was also three times thicker for the patch-treated areas than those treated with minoxidil or placebo.

The researchers studied the skin of the mice under a microscope to examine what biological mechanisms were at play.

They found the release of natural chemicals that encourage hair to grow, such as keratinocyte growth factor and vascular endothelial growth factor.

Because hairless mice are considered a good reflection of balding men, Dr Wang is confident it will work in men, too.

But there isn’t much promise for those who have been balding for many years – the patch may only work in men who have recently lost hair.

This is because the device reactivates follicles that are dormant instead of creating new ones.

Dr Wang thinks that wearing it for a few hours per day should be sufficient to get results but it won’t work while sleeping.

He said: ‘I think this will be a very practical solution to hair regeneration.’

Hair loss affects an estimated 25 per cent of men by the time they reach 25 years of age.

The most common treatment men and women use is minoxidil, which can come as a lotion or foam that stops and even reverses hereditary hair loss.

But it is rarely available on the NHS and may not work for everyone – even after trying for months on end – and has side effects such as headaches and low blood pressure.

Another popular treatment, finasteride, can be used by men on prescription only.

It works by decreasing the amount of the male sex hormone dihydrotestosterone (DHT) produced by the body, which can cause symptoms such as  loss of sex drive and ejaculation difficulties.

WHAT ARE THE CAUSES OF HAIR LOSS?

Hair loss is common, with approximately 25 per cent of men start to go bald by the time they turn 25, according to The American Hair Loss Association.

An estimated eight million women in the UK are currently suffering from a degree of hair loss, according to a study of 2,000 women by cosmetics giant L’Oreal.

The most common type of hair loss can be triggered by life changing events such as moving home, a bereavement or pregnancy, leading to overall thinning of the hair.

With most of these, hair loss is temporary and can be helped.

Nutritionists might say that if nutrient levels are low, it will be expressed through the hair. Hair follicles rooted in the scalp need to be surrounded by a rich supply of blood to ensure they are sufficiently nourished.

Dermatologists suggest that faddy diets usually result in iron deficiency, as might avoidance of red meat. Vegetarians or vegans who are low in vitamin B12 and zinc could be prone to hair loss.

Research shows thinning hair is also linked to progestogens – the synthetic form of progesterone found in the Pill and Hormone Replacement Therapy.

Covid vaccine side effects: Anaphylaxis is a rare but severe allergic reaction