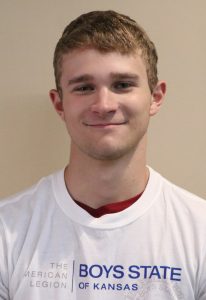 June 17, 2019 — Approximately 405 young men from across the State of Kansas, all of whom will enter their senior year of high school this fall, participated in the 2019 session of the American Legion Boys State of Kansas Leadership Academy. The event, which concluded its 82nd year, was held June 3-8 at Kansas State University in Manhattan for the 28th consecutive year.

The ALBSKLA provides a relevant, interactive, problem-solving experience in leadership and teamwork that develops self-identity, promotes mutual respect and instills civic responsibility. Boys State is a “learning by doing” political exercise that simulates elections, political parties and government at the state, county and local levels, providing opportunities to lead under pressure, showcasing character and working effectively within a team. It’s also an opportunity to gain pride and respect for government and the price paid by members of the military to preserve democracy.

Levi Hickert, Hays (attends Hays High School), was named the Kansas Boys State winner of the Samsung American Legion Scholarship. Hickert receives a guaranteed $1,250 scholarship and advances to be considered as a National Scholar for the chance to earn up to a $10,000 scholarship. Hickert was a senator representing Patton County during the week.

Davis Miller, Mission Hills (attends Pembroke Hill School, Kansas City, Mo.) received the William “Bill” F. Stahl Outstanding Justice Award, given to the outstanding member of the Boys State of Kansas Supreme Court as voted on by his Supreme Court peers. The award is presented in recognition of outstanding commitment to justice under the law and dedicated service to Boys State of Kansas. Stahl, of Junction City, Kan., passed away in September 2015 and was a longtime supporter of the ALBSKLA.

The 2020 American Legion Boys State of Kansas Leadership Academy is scheduled to be held the week beginning Sunday, May 31, again at Kansas State University. For information on becoming a delegate, visit http://kansasboysstate.com/ or http://ksbstate.org/.

The following is a list of this year’s ALBSKLA delegates from northwest Kansas. Those delegates denoted with a star (*) were elected by their Kansas Boys State city as its outstanding citizen:

Misinformation in the age of internet – Arab News

Karnataka to set up centre for Internet of ethical things – SocialNews.XYZ