Between 2000 and 2015, the rate of premature deaths from heart disease declined by an encouraging 20 percent – but 2.3 million Americans between ages 25 and 64 still suffered an early death due to the condition.

Heart disease remains the number one killer of both men and women in the US.

It’s a disease of old age, but as rates of obesity and diabetes surge, those conditions accelerate the deterioration of the heart, driving up death rates among younger Americans.

But among younger white women, declines have plateaued, and rates of early heart disease death among Native Americans have even increased since 2000. 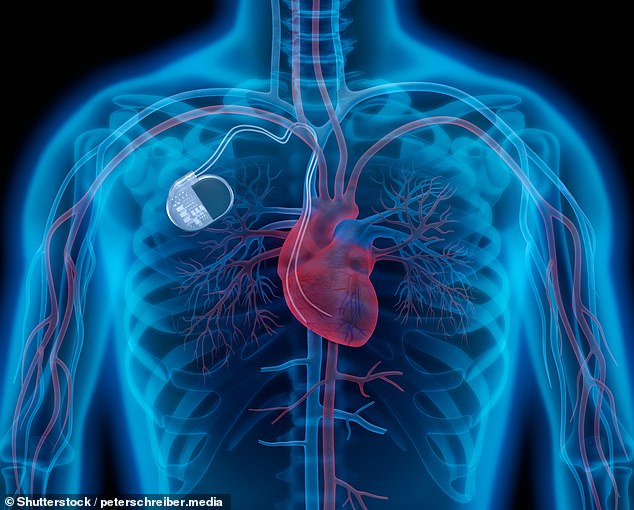 Heart disease deaths in the US have declined by an encouraging 20% overall since 2015, but obesity-triggered forms of the disease have driven declines among white women to a standstill and even triggered increases among Native Americans, a new study found

Notably, the number of early heart disease deaths cause by high blood pressure were two-and-a-half times higher in 2015 than in 2000.

Batting down those numbers has long been a top public health priority in the US.

But heart disease is really a catch-all term for several forms of deterioration of heart and muscle function, each of which affect different groups of people – divided by age, race, ethnicity, other genetic risk factors, and geography – differently.

To work out what’s working for which groups – and what isn’t – the researchers at the NIH’s National Cancer Institute, in Rockville, Maryland, assessed data on all deaths occurring in the US between 2000 and 2015.

On the whole, heart disease deaths declined by about 20 percent among both men and women in the US between 2000 and 2015 – though rate remain about twice as high among men as they are among women.

But from there, consistency unravels.

Death rates from heart disease remain twice as high among black men and women as they are for white people – but have been declining more steeply.

Over the course of the study’s 15-year analysis period, about three percent fewer black women died each year.

Among black men, the death rate declined by 2.4 percent annually.

Similar declines were seen among Latinx women and men, respectively.

But the study, published in JAMA Cardiology, also reported disturbing increases among young (25-49) Native American and Alaska Native women, among whom heart disease death rates crept up by about 0.3 percent a year.

The Western diet is loosely defined as one full of fatty and sugary foods, such as burgers, fries and soda.

People often eat foods that are high in

Health effects have been linked to things such as hypertension, heart disease, diabetes, obesity, colorectal cancer and dementia.

READ  Cancer warning: How to detect signs of the disease in your toilet habits

The increases and plateaus revealed by the mortality data were driven by two forms of heart disease: ischemic and hypertensive.

Ischemic heart disease develops as a result of the arteries becoming progressively more narrow, depriving the heart of sustaining blood and oxygen such that the muscle becomes tired and weak.

And the main process that causes blood vessels to narrow is the buildup of lipids, of fats, inside them.

That fat build-up is part and parcel of obesity, which is in turn driven by poor diets high in fats, sugars and processed foods, and insufficient exercise.

Social factors raise risks for this entire chain of events, too. The study authors underline the disparities in both income and access to care that have long divided heart disease risks along racial and regional lines.

They also flagged the rise of endocarditis, a life-threatening infection of the heart, in Native and white Americas.

‘The significant increase in premature mortality that is associated with endocarditis among young white individuals and young American Indian and Alaska Native men is also worrisome, despite relatively few deaths,’ the study authors wrote.

‘Coincident with the marked rise in deaths from opioid use, increase in endocarditis among certain groups may be associated with the opioid epidemic.’

Despite declines identified at the broadest levels, the NIH authors wrote that increases in heart disease mortality in certain groups and driven by certain causes may indicate that the US’s gains are flagging.

‘Without rapid and sustained progress against cardiovascular risk factors, public health goals to further reduce the burden of cardiovascular disease mortality in the United States’ –  to cut death rates by 20 percent between 2010 and 2020, according to the American Heart Association – ‘are unlikely to be met,’ they wrote.

Coronavirus: Face coverings to be mandatory on public transport

Face coverings to be made compulsory on public transport in England

Coronavirus warning: Full list of COVID-19 symptoms – should you be tested?

Overuse of antibiotics to prevent or treat coronavirus will lead to more deaths, WHO warns

Coronavirus: How the UK is sleeping under lockdown