The Pets.com sock puppet dog stars in a commercial for the company, Jan. 11, 2000, in Los Angeles.

In his quarterly letter to clients, Einhorn also trumpets a successful short position in Tesla but does not specifically mention if the fund is betting against Chewy.

“For those that think the 2000 bubble was the big kahuna, consider Chewy, which went public in June 2019,” Einhorn said.

Shares of the online pet retailer were up more than 2% Thursday, and have soared more than 50% since its public debut in June. Einhorn pointed to Chewy’s current debt and market value, which he said is 30 times the value of Pets.com at its peak, as reasons for skepticism.

“Over its life, Pets.com chewed through just over $200 million of investor capital,” Einhorn said. “CHWY has burned $1.6 billion and counting.”

Pets.com, which went out of business in 2000, became one of the most infamous initial public offerings of the dot-com bubble. It was backed by Amazon and raised $82.5 million but folded nine months after its IPO thanks to deep recurring losses. Part of that was aggressive advertising, including ubiquitous sock puppet commercials.

Greenlight Capital funds returned 5.8% in the second quarter, bringing the year-to-date gain to 17.4%, according to the letter. The fund rode successful bets on gold and GM and a short position in Tesla. Einhorn’s hedge funds lost more than a third of their value last year, which he said forced him to reopen the funds for new investments.

In his early years, Einhorn scored some of Wall Street’s best results, including a 32% return in 2009. He also made the most prescient call of the financial crisis — the collapse of Lehman Brothers.

Chewy was founded in 2011 by Ryan Cohen and Michael Day, and now calls itself the “largest pure-play pet e-tailer in the United States.” PetSmart, which is backed by private equity firm BC Partners, acquired Chewy in 2017 for $3 billion. Chewy released its first-ever quarterly results in June, and showed narrowing losses that were mostly in line with analysts’ forecasts. Sales rose to $1.1 billion from $763.5 million a year ago.

Einhorn pointed to similarities in public statements by the now-defunct Pets.com and Chewy.

“There is a saying that over the short-term the market is a voting machine and over the long-term it is a weighing machine,” he said. “We look forward to a time when there is more weighing and less voting.” 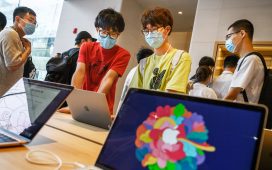