People who died in the Mount Vesuvius eruption of AD79 had a slower death than previously believed, according to new research.

It is commonly thought that people living in the seaside town of Herculaneum, who fled to stone boathouses along the beachfront when the volcano erupted, were vaporised by the extreme heat of the volcanic eruption.

But a new analysis of skeletons from the scene shows that they may have lived long enough to suffocate from the toxic fumes of the pyroclastic flow – the devastating, ultra-fast stream of hot gas and volcanic matter which flows from some eruptions.

Archaeologists found that the structure of the skeletons and remaining collagen was inconsistent with vaporisation, suggesting that the bodies were not exposed to temperatures as extreme as expected.

The eruption of Vesuvius famously buried the Roman town of Pompeii and the pyroclastic flow destroyed nearby Herculaneum. More than 340 people who took refuge in the town’s vaulted stone boathouses perished.

Professor Oliver Craig from the University of York’s Department of Archaeology said: “The realisation that collagen was present in the Herculaneum bones was completely unexpected.

‘We realised then that commonly held assumptions regarding the manner of their death could not be true.

‘If the bones were exposed to extreme heat then we would expect the collagen to be lost very quickly from the bone. Finding collagen was our first indicator of lower temperature exposure.’ 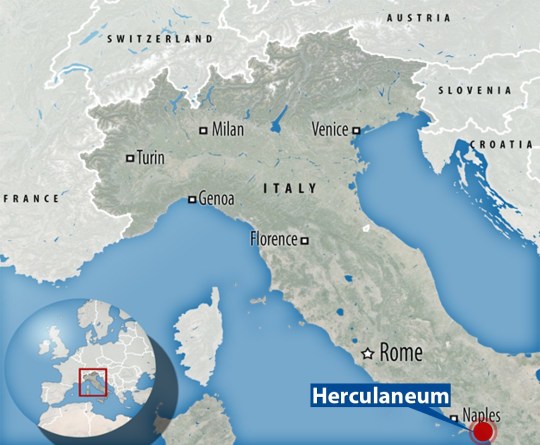 Tests conducted on the ribs of 152 individuals from the boathouses revealed they did not match the patterns expected if they had been exposed to extremely high temperatures of 300 – 500C.

Forensic expert Professor Tim Thompson, the lead author from Teesside University, said: ‘The people hid for protection, and got stuck. The general theory has been that these individuals were instantly vaporised.

‘What was interesting was that we had good collagen preservation but also evidence of heat-induced change in the bone crystallinity. We could also see that the victims had not been burned at high temperatures.’

The research team said it may have that the pyroclastic flow was relatively cool, with some estimates suggesting it was only 240C. The boathouses may have also provided some insulation, further lowering the temperature people were exposed to.

The researchers said the collagen preservation in the bones of the Herculaneum victims has opened up a range of new avenues of research, including using stable isotope measurements to generate a snapshot of the Roman diet.

In a separate study published earlier this week, Dr Pier Paolo Petrone, head of the laboratory of human osteobiology and forensic anthropology at the University Federico II in Naples, revealed that one man’s brain was turned to glass in the eruption.

He told FocusOn News: ‘While examining the exploded skull, I noticed some black glassy shining material inside it. I then realised that this had to be fragments of the brain, vitrified by the intense heat. Vitrified remains were also encrusted on the surface of the skull.

‘Later in the lab, I conducted a paleo-forensic analysis of the bone remains… found that the glassy black fragments extracted from the cranial cavity of the victim were preserving proteins and fatty acids typical of human brain tissue.”

Huawei has a new foldable phone that's almost identical to its first one, but even pricier

Watch out Virgin Media and Sky! There's now a cheaper way to view 4K content on your telly