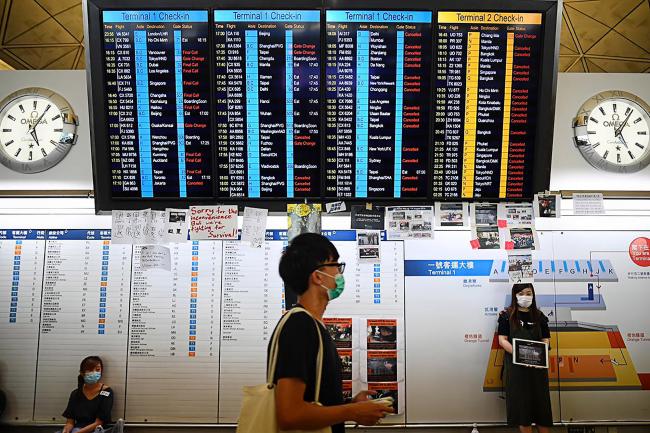 (Bloomberg) — Hong Kong’s stocks fell amid renewed pressure after protesters brought the city’s airport to a standstill Monday, highlighting the economic fallout from 10 weeks of anti-government demonstrations that show no sign of easing.

The fell as much as 1.5% Tuesday, with developers and casinos among leading decliners. A gauge of property developers slipped 1.6% while a Bloomberg measure of Macau casino stocks dropped 2.3% as of 9:55 am in the city. Cathay Pacific Airways Ltd, which on Monday tumbled to its lowest levels in a decade after drawing China’s wrath over Hong Kong protests, fell as much as 5%.

Protesters swarmed the airport Monday, causing the biggest disruption yet to the city since the unrest began in June. The Hang Seng China Enterprises Index of Chinese firms has lost 16% since its April high, not far from entering a technical bear market. The MSCI Hong Kong Index fell 2.1%. The gauge has fallen 14% since mid-July.

The threat from the trade war and weeks of local unrest is already showing in the property market, as well as tourist numbers, hotel occupancy and retail sales. A weak yuan is another cause for concern, as it will damp spending from mainland visitors and pressure earnings for firms that rely on China. Profits for members of the Hang Seng Index are forecast to drop the most since the global financial crisis this year, data compiled by Bloomberg show.

“It looks like the situation will get worse,” said Airy Lau, investment director at Fair Capital Management Ltd. “Together with the higher global recession risk from U.S.-China friction, the Hang Seng Index is likely to have 5-10% more downside.”

Swire Properties Ltd. — which operates malls and hotels in the city — fell 2.2%, taking its losses since June 10 to 23%. MTR Corp., regarded as one of Hong Kong’s safest stocks before the protests began, slipped as much as 3.1%.

Mainland investors have made the most of the slump in Hong Kong-listed equities, purchasing stocks through exchange links every day this month. They bought a net $289 million worth of the city’s shares on Monday, even as onshore markets rallied. The Hong Kong dollar strengthened as much as 0.02% on Tuesday.

Forget a Cash ISA! I think FTSE 100 dividend stocks can boost your State...

Taiwan shares lower at close of trade; Taiwan Weighted down 0.99%