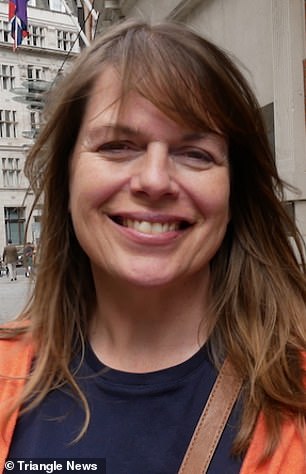 Anna Watson is the founder, we are told, of the Arnica Network, which believes in a ‘holistic approach to health’

Anna Watson is not the kind of woman you would expect to be accused of putting young lives at risk.

She is a much respected primary school teacher who lives in the affluent London suburb of Kingston-upon-Thames with her businessman husband, their two children, aged 13 and 15 — and the family dog.

In her spare time, Mrs Watson, 53, also tends the allotment. She is a camper van enthusiast, too. The details of her comfortable middle-class life are listed on her Twitter profile.

One entry, though, is worthy of further investigation. She is the founder, we are told, of the Arnica Network, which believes in a ‘holistic approach to health’.

What this means in practice is that Mrs Watson, and a growing number of people like her, are opposed to vaccinations; any vaccinations, especially the MMR vaccine.

In fact, Mrs Watson is behind one of a number of groups forming the driving force behind one of Britain’s largest online anti-immunisation movements.

Arnica boasts 37,000 members and the comments (around 100,000 a month) are a mix of flawed science and cherry-picked data.

One contributor advises: ‘Any disease can be treated with homeopathic [remedies], bed rest and fluids.’

Next to the hashtag #DeathfromVaccines is a picture of a child who is now dead, we are told. 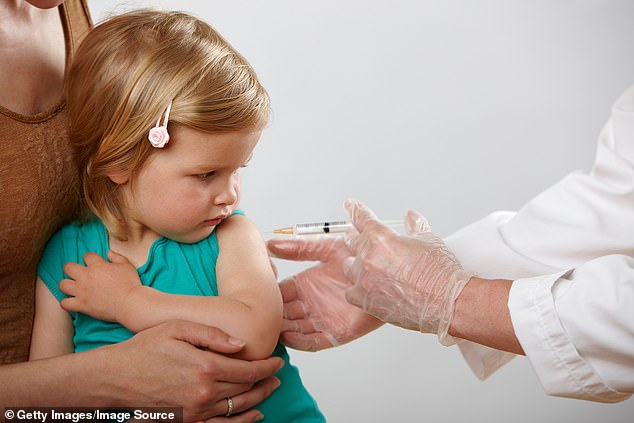 The World Health Organisation decided to revoke Britain’s status as a measles-free country.  Last year there were 966 cases which was almost four times as many as in 2017

The photo of another youngster is accompanied by the message: ‘Sorry doc, if you want to inject your poison into me made by a drug company that only profits if I get sick you shouldn’t be making decisions about my health.’

No mention, obviously, of the overwhelming evidence to the contrary, that public health during the 20th century has been transformed by the availability and use of vaccines.

But few conspiracy theories have played so well in the age of ‘fake news’ than those peddled by the anti-vaccine lobby, which have found fertile ground in the internet age.

Some of the most prominent theories still centre around the discredited research of Andrew Wakefield, the disgraced former NHS consultant who, 20 years ago, triggered a global public health scare by linking the MMR vaccine with autism.

Like many news organisations, this newspaper treated his initial research, published in the highly respected medical journal The Lancet, with all seriousness, and argued for parents to have a choice whether to immunise their children with single vaccinations rather than the combined MMR.

Some parents went even further and opted not have their children vaccinated at all.

Wakefield’s findings were found to be ‘utterly false’, and after a four-year investigation concluding in 2010, the GMC struck him off the medical register, accusing him of ‘bringing the medical profession into disrepute’.

Yet, astonishingly, two decades on, the appetite for his flawed findings is greater than ever. Wakefield, 62, now lives in the U.S. But his influence in Britain has never been stronger.

The populist agenda that followed publication of his research — that there has been a sinister cover-up by the medical establishment and the pharmaceutical industry to hide the dangers of vaccinations — has gathered such momentum that this week Boris Johnson intervened.

‘I’m afraid people have been listening to superstitious mumbo-jumbo on the internet and thinking that the MMR vaccine is a bad idea,’ the Prime Minister declared on a visit to a hospital in Cornwall. ‘That’s wrong, please get your kids vaccinated.’

His plea mirrored appeals by the Health Secretary and the head of the NHS, after the World Health Organisation’s decision to revoke Britain’s status as a measles-free country. 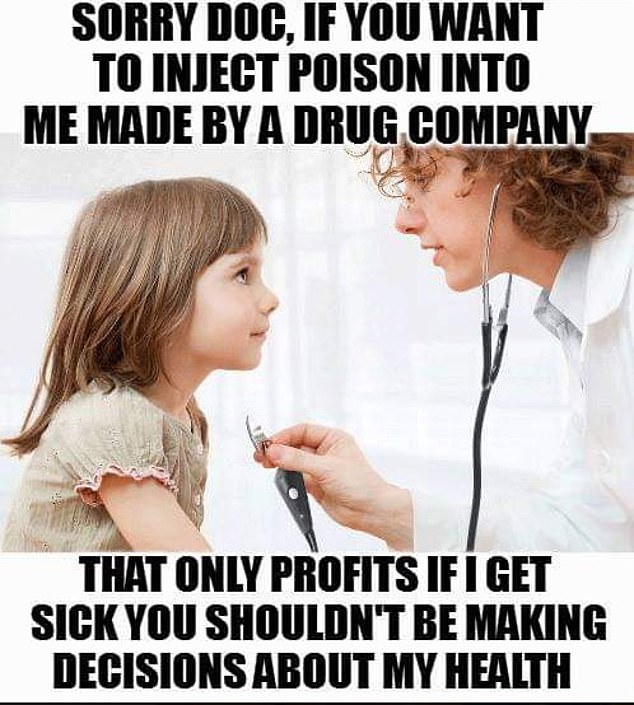 Mrs Watson is behind one of a number of groups forming the driving force behind one of Britain’s largest online anti-immunisation movements. One member of Arnica contributed this meme

Last year there were 966 cases, almost four times as in 2017 — a shocking, shameful development that can, largely, be blamed on the resurgence of Wakefield’s discredited views.

Much of the anti-vaccine nonsense on social media features his videos and material.

All seem to sidestep the proven scientific fact that failing to vaccinate your child — which doctors have compared to ‘driving a car without buckling them into seatbelts’ — can be disabling or indeed lethal, exposing youngsters to the risk of potentially life-threatening complications such as meningitis, encephalitis (swelling of the brain) and deafness.

Children need two vaccinations to fully protect against the disease. The uptake rate for the first is 92 per cent, but it falls to 87 per cent for the second, among the worst in the developed world and well below the 95 per cent immunity target necessary to safeguard the population against a disease.

It means one in seven children due to start primary school in the autumn is not fully protected against measles — rising to one in four in London.

Behind the statistics is a telling demographic. NHS data reveals take-up rates for the measles, mumps and rubella vaccination (MMR) has declined in some of the wealthiest areas such as Kensington, Chelsea, and Westminster but have increased or remained stable in places such as Barnsley, Bolton and Oldham.

The findings chime with previous research that showed online anti-vaccination posts were most likely to have been written and shared by middle-class people.

People such as Anna Watson, who said she felt no responsibility for the choice of parents. ‘I wouldn’t feel guilty if [their children] caught a disease,’ she told the Mail.

‘It’s not my decision,’ adding: ‘You can’t talk about certain minority groups in certain ways, but you can say anti-vaccinators have blood on their hands.’

Hers is not the only online group happy to peddle a steady stream of what the scientific community regard as misinformation. Others include ‘Vaccine Truth’ (62,000 followers), ‘Beware the Needle’ (38,000) and ‘Vaccines Uncovered (57,000).

They tell us ‘Vaccines cause brain damage’ . . . ‘Unvaccinated kids are healthier’ . . . ‘It’s not about health. It’s about money, power and control’ . . . and [Wakefield] ‘deserves our respect and admiration.’

Not surprisingly, the man himself is a big fan of social media ‘which has evolved beautifully,’ he said recently, explaining that it had provided an alternative ‘to the failings of the mainstream media’.

The truth is that it has provided a platform for his discredited theories to go unchallenged, like the risk of ‘horizontal transmission,’ which results, he claims, in a vaccinated person infecting an unvaccinated person.

The Facebook groups in his name were set up by Janette Robb, a retired primary school teacher.

Her 40-year-old son is autistic and has spent several years in psychiatric hospitals. She blames his condition on the MMR vaccination he had at 15, but admitted: ‘I have got no proof, of course.’

Speaking from her home in Dunbartonshire, Mrs Robb, 77, said: ‘Dr Wakefield’s research was rubbished because it did not suit the Establishment. I read that if every autistic child was compensated, it would bring the country down. It’s too late to save my son but I could save somebody else’s.’

She repeated the claim circulating online that half of all children will be autistic by 2025. ‘What’s the country going to be like when they grow up?’ she asked.

‘It gives me nightmares.’

Immunisation scepticism, which is the polite way of putting it, is not just confined to the internet.

Dr Richard Halvorsen, a London GP for more than 20 years, is medical director of a private clinic called BabyJabs.

In 2012, he was forced to remove a post on the BabyJabs website alleging the MMR vaccine could be ‘causing autism in up to 10 per cent of children in the UK’ after the Advertising Standards Authority (ASA) said it was a baseless claim.

Dr Halvorsen said this week he stood by his claim of a likely link. ‘There are many parents who swear that their little boy was developing completely normally until they received the MMR vaccine and then within a short period they regressed and they are convinced the MMR is to blame.

‘Parents know their children pretty well. Some will be mistaken but I find it hard to believe they are all wrong. They might be but I find it unlikely. But that is not hard evidence. I accept that.’

There is hard evidence, on the other hand, of what can happen if a child is not immunised. Little Alba Moss contracted measles because she was too young for her first dose of the MMR vaccine, and spent ten agonising days in hospital earlier this year, with her eyes swollen shut most of the time.

She was tube-fed, put on a drip, and pumped full of drugs. At one point, her parents thought she would not survive. Staff at the Chelsea And Westminster Hospital encouraged them to post pictures of Alba on Facebook to warn parents of the potential consequences of not getting their children inoculated.

The backlash from ‘anti-vaxxers’ began immediately Alba’s pitiful photo appeared. ‘I’ve never witnessed hatred like it,’ her mother Jilly Moss, 35, told the Mail. ‘They said it was ‘fake news’ and Alba was a doll. My husband was accused of working for a pharmaceutical company [he’s actually in banking] and that we were being paid to spread the story.

‘What is going on in these anti-vax groups is unbelievable. How can people be so ignorant?’

In Britain, all vaccines go through a stringent development process and testing that can take 20 years, and the science is clear: there is no link between the MMR jab and autism. This was the unequivocal finding of the latest study by Danish researchers that followed 650,000 youngsters over a decade.

Dozens of studies have reached that conclusion. Yet the anti- vaccine movement is gathering pace here.

‘We are still suffering from the entirely debunked MMR scandal of the Nineties, and it is potentially disastrous that as a result so many young people are now susceptible to serious, often life-threatening infectious diseases such as measles,’ said Professor Helen Stokes-Lampard, chairman of the Royal College of GPs.

Wakefield’s discredited claims gained fresh momentum with Donald Trump’s elevation to the White House. Anti-vaccine rhetoric was a common theme in his campaign. Trump even met Wakefield — who is dating the supermodel Elle Macpherson.

Wakefield has been involved in several ventures seeking to cast doubt on vaccine safety (paid £250,000 by one, £220,000 by another) since arriving in the U.S. in 2001 and is in demand as a speaker. At a recent event, the audience rose to its feet, screaming, ‘We love you’.

His latest ‘finding’ is that vaccines have created a more potent strain of measles. And an upcoming lecture is entitled: ‘Man, Measles and Make-believe’ — and the blurb claims it ‘separates fact from fiction in the measles debate’.

But the only debate is between discredited individuals such as Wakefield and his followers, and everyone else; between science ‘fiction’ and scientific fact.

His latest claim will be taken as gospel by some back in Britain.

One hundred Australian children stranded in Wuhan as coronavirus spreads

Caprice Bourret health: Star forced to quit TV show in the past due to deadly condition

Over 300,000 auto sector jobs gone in India; government is in denial – FreightWaves

Older people with more friends do better at preventive health

Vaping firm's advert is BANNED for suggesting its products were endorsed by Sir Mo...