A cryptocurrency is a digital currency that is encrypted for security. Many of these currencies are decentralised systems based on blockchain technology. They are not issued by a central bank or monetary authority, which suggests that they are immune to government intervention – an attribute making them particularly attractive to some investors.

Cryptocurrencies have become popular with traders, initially because of the rapid climb in price when they were first launched and now because of their volatility.

How are cryptocurrencies performing?

The sector saw steep highs at the end of 2017 as cryptocurrencies looked like they were on the cusp of becoming a part of institutional investors’ portfolios and receiving the backing of big banks. As 2018 rolled on, however, this level of investment never transpired. The period of losses that then followed was dubbed by some as the “crypto winter”.

With billions of dollars wiped from the cryptocurrency market during this time, some speculated that the crypto bubble had truly burst. Earlier this year, Matt Hougan, global head of research at Bitwise Asset Management, told Bloomberg that 95% of the 2,000 cryptocurrencies that exist today will “die a painful and deserved death”.

Then, halfway through 2019, crypto appeared to get another boost. Facebook [FB] announced that it planned to launch a digital currency of its own, Libra, a move that some thought could add real legitimacy to digital currencies.

At the time of writing, however, Facebook’s plans for Libra seem to be facing obstacles from partnering payment companies and government regulators alike. As a result, major digital currencies that had rallied on the social media company’s initiative failed to sustain gains, underscoring the frequent – and often dramatic – ebbs and flows in the sector. 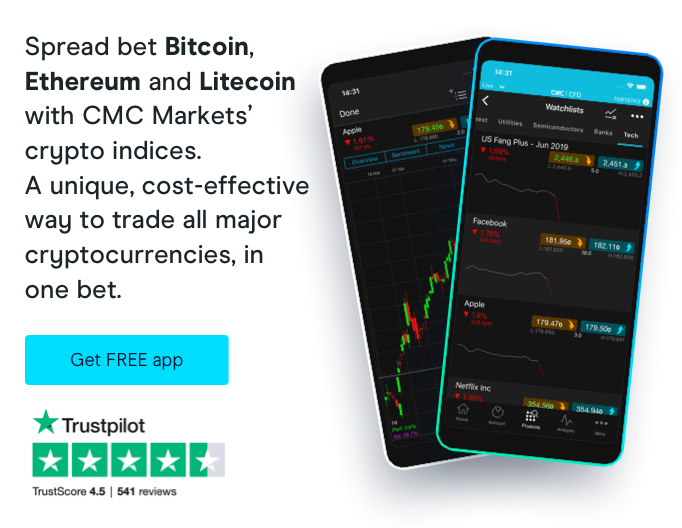 What are the major cryptocurrencies?

As the leading digital currency in the sector, Bitcoin [BTC-USD] is often used as a barometer by which to track the highs and lows of the industry. After hitting an all-time high of almost $20,000 in December 2017 the stock lost nearly 80% of its value by the beginning of 2019.

Valuation lost between December 2017 to the beginning of 2019

This year, the stock has rocketed up again, gaining by more than 112% to 20 October. A large part of Bitcoin’s boost is a result of Facebook’s move into the digital currency space, which threatens to bring the industry to the mainstream. In July, the stock reached a 2019 peak of $12,913 however, as of 20 October its share price was more than 35% off that previous high at $8,200.

Similarly, in a long list of alternative coins or altcoins, Ethereum [ETH-USD] has dived off its all-time high of $1,261 by 85% as of 14 October. Much like Bitcoin, it saw a resurgence this summer, peaking around the $330 mark. Since then it has dropped back down by 45%. There will be extra pressure on Ethereum to develop as both the altcoin and Facebook’s Libra have similar goals via smart contract functionalities. For now, Bitcoin has a market share of near 90%, meaning traders have been focusing their attentions there for the time being.

EOS [EOS-USD] is a blockchain-based currency that aims to solve the scalability issues of Bitcoin and Ethereum as well as eliminate all fees for users which helps to remove entry barriers. It is the youngest of the three currencies, having only come into the market a year and a half ago. Its aims pit it in direct competition with Facebook’s Libra, much like Ethereum. The stock has climbed by 19% this year up to 14 October but is currently 63% off its yearly high of $8.69.

The All Crypto Index works with all of the cryptocurrencies that CMC Markets offers and weights them based on market cap, which can give a wider indication of how the sector is performing. Strong performers such as Bitcoin, Ethereum, Ripple [XRP-USD], Bitcoin Cash [BCH-USD] and Litecoin [LTC-USD] are weighted more heavily at 12%, while EOS, Stellar [XLM-USD] and Cardano [ADA-USD] each have a weighting of 5.71%.

This index groups together the largest and most established stocks in the crypto market and tracks their performance. Bitcoin at 40% makes up the largest proportion of the index while Ethereum constitutes 28.19%. The index is then further diversified with Ripple at (14.99%), Bitcoin Cash (8.11%) and Litecoin (8.7%).

Proportion of the Crypto index made up by Bitcoin

The emerging crypto index groups together less established altcoins. This is to allow a view of new and smaller-cap cryptocurrencies. Out of the seven stocks, EOS makes up the largest proportion constituting 34.57%, while Stellar makes up 14.76%, Cardano 13.06%, TRON [TRX-USD] 11.25% and Monero [XMR-USD] at 12.20%. Dash [DASH-USD] and NEO [NEO-USD] make up the remainder at roughly 8% and 6% respectively.

READ  Breaking: Bithumb exchange hacked again; over 3 million EOS might have been transferred out of its hot wallet - AMBCrypto News

Brazil’s PIX Payments System Has the Same Spirit, but Not a Blockchain Structure – Cointelegraph

Coronavirus Is Changing How Crypto Markets Are Trading – CoinDesk – Coindesk