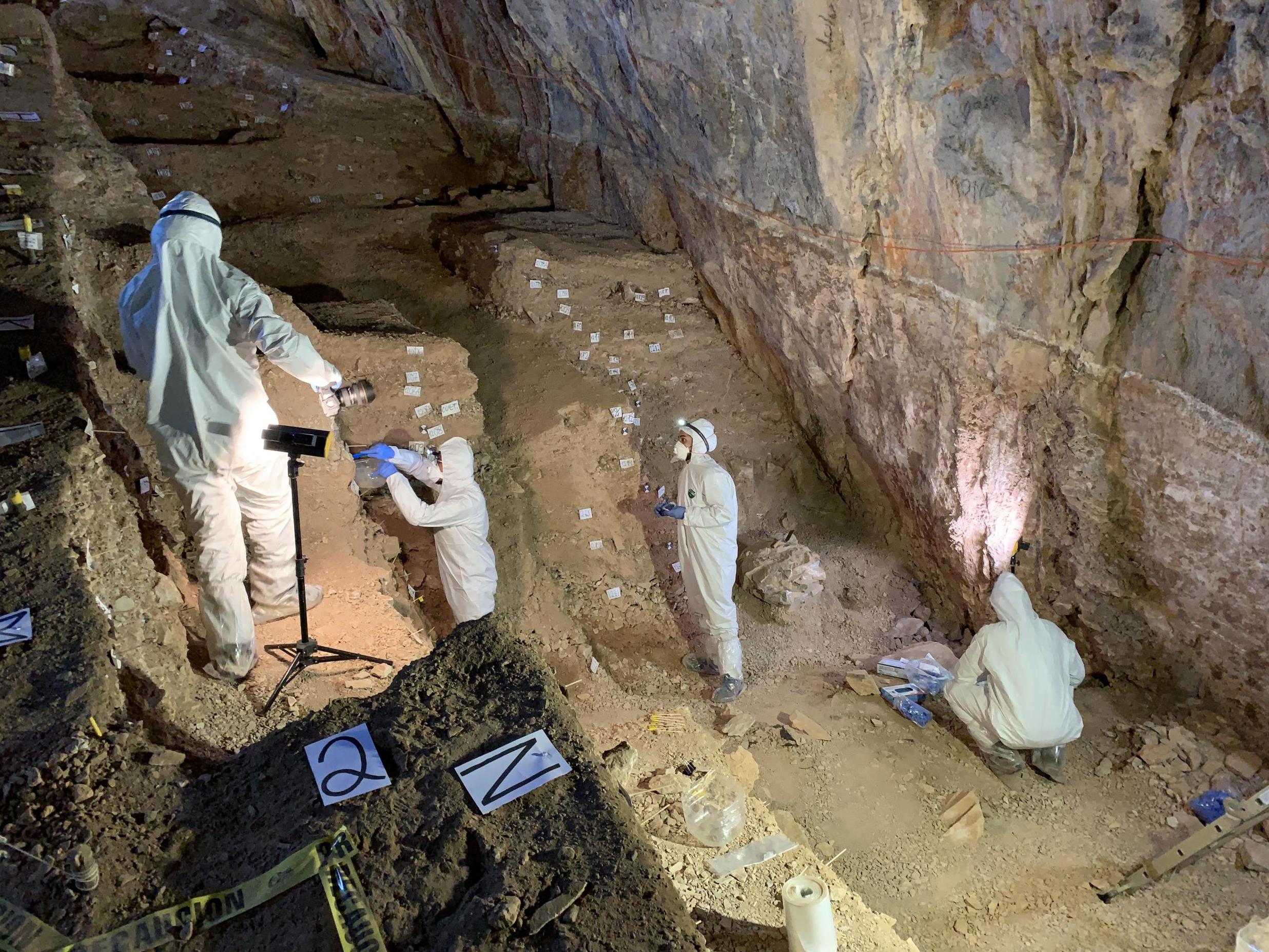 An extraordinary new archaeological discovery has revealed that humans arrived in the Americas at least 11,000 years earlier than previously thought – rewriting the human story of the continent and dramatically changing our understanding of world prehistory.

The find – in central Mexico – indicates the continent was first colonised at some stage prior to 30,000BC. Until now, the earliest proven colonisation had been dated to around 19,000BC, meaning the America’s human story is at least 50 per cent longer than previously thought.

The new research reveals that very early Native Americans were living in Mexico, and presumably also in parts of the rest of North America, from at least 30,000BC onwards.

The discovery – in a remote cave in the state of the Zacatecas, central Mexico – is of huge international importance and represents one of the most significant archaeological finds anywhere in the world in recent decades.

Very lengthy and thorough excavations within the cave have yielded almost 2,000 stone artefacts dating from between 30,000BC and 11,000BC, of which around a dozen date from between 30,000 and 24,000BC (the very earliest chronological phase of the site).

These dozen early artefacts include a very small number of stone projectile points, probably used as spearheads, and some stone flakes, generated during tool-making activities.

The later artefacts (stone knives, scrapers, adzes, blades and burins) dating from 24,000BC to 11,000BC are also of extraordinary importance, especially as some of those also pre-date the hitherto generally accepted date for the first peopling of the Americas.

“A combination of new excavations and cutting-edge archaeological science is allowing us to uncover a new story of the colonisation of the Americas,” said one of the leading archaeological scientists involved in the project, Professor Tom Higham of the University of Oxford’s radiocarbon dating unit.

“The discovery that people were there more than 30,000 years ago raises a range of key new questions about who these people were, how they lived, how widespread they were and, ultimately, what their fate was.”

The research – published today in the Nature journal – has been carried out by a team of archaeologists and other scientists from Mexico, the UK, Denmark, the USA, Brazil and Australia.

Now that the timeline of the peopling of the Americas has been so dramatically lengthened, archaeologists throughout both North America and South America are likely to redouble their efforts to find additional very early sites.

The newly discovered stone artefacts were almost certainly made by nomadic or semi-nomadic hunter-gatherers who, over countless generations, would have ranged across vast tracts of territory in at least parts of Mexico and the US.

Now that archaeologists know that a small group of humans were active at the cave site, it is inconceivable that they would have been the only human group in the Americas at the time.

Indeed, if they had been, they would have found it virtually impossible to survive for the thousands of years that the cave was, albeit probably intermittently, occupied.

It is therefore likely that at least some other sites of comparable or even greater age still await discovery, at least in North America – but possibly also in South America.

The discovery raises three huge questions – who were these newly discovered first Americans, when did their ancestors enter the New World – and how?

Because no human remains and no human DNA has so far been identified at the site, it is not possible to know for sure who they were in ethnic and genetic terms.

Most Native Americans (in both North and South America) are mainly descended from the same ancient peoples that most Chinese, Japanese and other East Asians are descended from.

However, recent genomic research into Native American origins suggests that the initial peopling of the Americas was probably carried out by a different group of people partly related to modern-day Australian aborigines, Papua New Guineans, Andaman Islanders (from near India) and Mamanwa people from the Philippines.

And it is conceivable therefore that the newly discovered first Americans, whose artefacts have been found in the central Mexican cave, were partly related to the ancestors of the modern Aborigines and Papuans etc.

But when and how did they enter the New World?

The proto-Melanesian genetic signature survives as a small element within the genomes of several indigenous American Indian groups in the Amazon basin – and the only ancient DNA evidence for that link also comes from the Amazon (five very ancient skeletons, each at least 10,000 years old).

The earliest date for the newly discovered Mexican site is 30,000 BC.

These very early, perhaps partly Melanesian-related, first Americans therefore arrived in their new world some time before that date.

But how did they get there?

They almost certainly did not arrive by voyaging across the Pacific.

But they may well have made the journey at least partly by sea (potentially in early kayaks) – by island-hopping, over many generations, from China or even from southeast Asia along the scores of islands that stretch in a great arc between the Philippines and Alaska (the single longest sea journey would have been a mere 120 miles). After reaching Alaska, their descendants would have been able to travel at least partly by sea along the west coast of North America to California and Mexico.

The idea that so far back in prehistory, ancient Stone Age people could have travelled to America, primarily by sea, appears challenging.

But the reality is that sophisticated human seafaring was actually born in Melanesia and the other Asian islands – which is not surprising, given that the area immediately south and east of the Asian mainland has the greatest concentration of islands in the world (currently 34,000 islands with a total landmass of only 1.2 million sq miles).

As far back as around 60,000 years ago, proto-Melanesians made the 40-mile sea journey from islands like Sulawesi and Timor to New Guinea/Australia (at that time one landmass) and became the first Australian Aborigines. Around 30,000 years ago early Melanesians were voyaging 100 miles from New Guinea to the Solomon Islands – and by 32,000 years ago, early seafarers were island-hopping for 300 miles to Okinawa – from either Taiwan or Japan. And much later, it was the people of that same Asian island region who carried out the world’s first great trans-Oceanic explorations (across the Indian Ocean and, in a series of voyages, across the Pacific).

It is not yet possible to know whether the earliest known Native Americans, who lived in the cave in central Mexico, were among the first generations of humans to live in their new world – or whether their ancestors had arrived generations earlier.

Only a search for additional ultra-early sites in Mexico and the USA might potentially answer that question.

The cave itself would have been an ideal hunting base. Remote, sheltered from storms, it would have afforded its inhabitants reasonable security, as it is not easily visible from afar.

In prehistoric times, the surrounding landscape would have been covered with huge pine trees and Douglas firs (a bit like modern Oregon and British Columbia).

Fresh water was available nearby – and the temperature inside the cave itself was (and still is) remarkably steady all year round, irrespective of the weather outside.

The excavation at the cave site has been led by Dr Ciprian Ardelean of Mexico’s Zacatecas University and UK’s University of Exeter.

Today the cave is remote and difficult to access. The nearest large town is Zacatecas – the capital of the state of the same name.

The excavations have revealed that it was intermittently home to people using exactly the same stone tool technology and exactly the same style of tools for 19,000 years (roughly 750 generations). It seems that those “people of the cave” were so remarkably well adapted to their environment that they presumably saw no need to further evolve at least the crucial stone technology aspects of their culture.

The investigation at the cave has even been able to reconstruct the area’s ancient environment and climate – partly through an analysis of plant DNA extracted from buried sediments in the cave by a leading member of the investigation team, Professor Eske Willerslev of Copenhagen University’s Centre for GeoGenetics. This has revealed the changing environment that the very early Americans living in the cave would have experienced.

The discovery is not just significant because it so spectacularly increases the length of America’s human story. It’s also important because it completely changes the climatic and cultural contexts in which the first humans colonised the New World. Prior to the Mexican discovery, the oldest proven human site in the Americas was at Gault in Texas (an open-air encampment partly dating from 19,000BC – during the height of the Ice Age).

But the newly discovered central Mexican site was occupied well before the world’s climate reached its coldest stage (and it is therefore conceivable that the first peopling of the Americas took place, some time prior to then, in a comparatively warm interlude – rather than in an ultra-cold phase, as believed up till now). The discovery also raises the intriguing possibility that our species, Homo sapiens, first arrived in the Americas at very roughly the same time that they reached Britain and the rest of Western Europe, or relatively soon afterwards. Up till now, it’s been generally believed that the Americas were first colonised by humans 20,000-40,000 years after the rest of the planet had been populated. That long-held belief will now have to be discarded – and the history books rewritten.