A woman diagnosed with a rare liver disease thought she would be lucky to live – let alone start a family.

And yet, at 28, Pennsylvania-based wellness therapist Amanda Washek is expecting her first child after getting a life-saving liver donor from an old friend.

As a transplant recipient, she is classed as high risk and must be closely monitored.

But the baby is doing wonderfully and her liver has stayed content, with some slight medication tweaking. 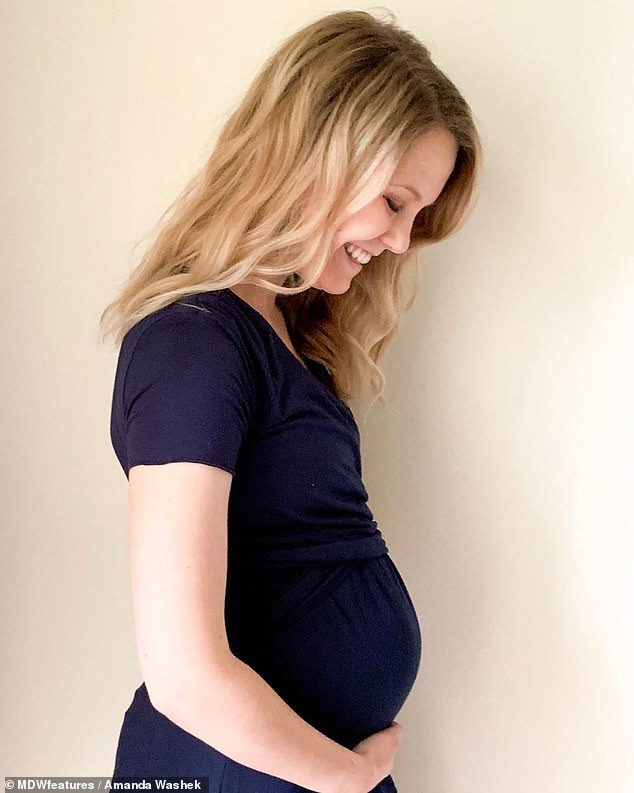 After having liver failure and requiring a living donor, Amanda was overjoyed to find out she was expecting for the first time 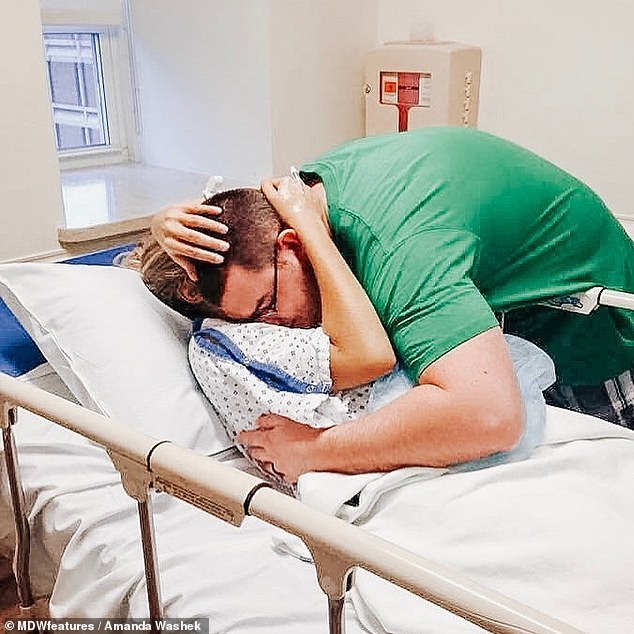 Before heading into surgery, Justin embraced Amanda because it was feared she might not make it 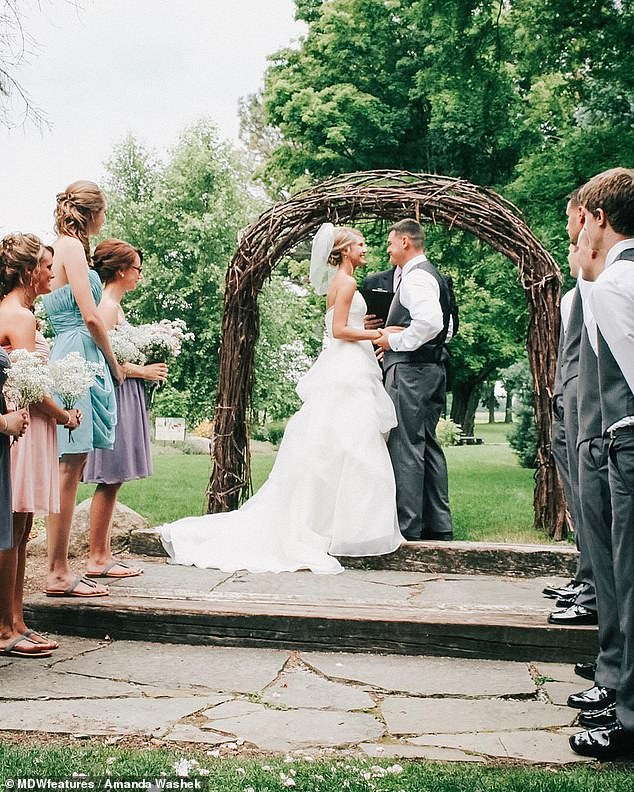 Amanda and Justin on their wedding day in 2013

‘I am not the person I used to be, but I have gained more than I ever imagined. I have a greater appreciation for life. I love waking up each morning and remembering that my liver works,’ Washek said.

‘I can take long walks with my husband, I can climb mountains, I have dreams that I can work towards and see without an inner fear that I won’t reach them. I have a future, and it’s all due to my donor and my surgeons.’

Washek’s woes started in 2014, when she developed a persistent tiredness and nausea in 2014, despite her efforts to feel better.

She was 23, newly married, and excited to start a life with her husband Justin.

As her symptoms progressed, she also became incredibly dizzy and couldn’t keep food down.

‘I was healthy, and then the next minute, I wasn’t, and my body started to fail me. I woke up feeling tired and weak which persisted on and off for months,’ said Washek.

‘After a few months of feeling tired and sick, the dizziness came on suddenly one day and as the day progressed my symptoms worsened until Justin took me to the hospital.

‘I was too weak to fight him and as I crumbled to the ground on the way to the hospital, I realized he was right to take me. I was too dizzy to stand, let alone walk. Justin had to carry me to the car, drive to the entrance, and find a wheelchair to get me into the hospital.’

By the time she was in the ER, her health had declined so much that her skin had become jaundiced, to the extent that nurses were taken aback.

‘The nurse shot out of her seat and said, “honey, you’re yellow!” and asked how long I’d been this way.’

Amanda instantly received a blood transfusion, but her health didn’t improve in the following days, so she had to be transferred to a better equipped hospital.

The idea of being transferred was a warning sign for Washek who realized that something had to be seriously wrong.

Doctors were able to monitor Washek’s condition for two weeks and she was diagnosed with primary sclerosing cholangitis (PSC) in May, a condition she’s believed to have had for most of her life but had progressed rapidly in the months prior to being admitted. 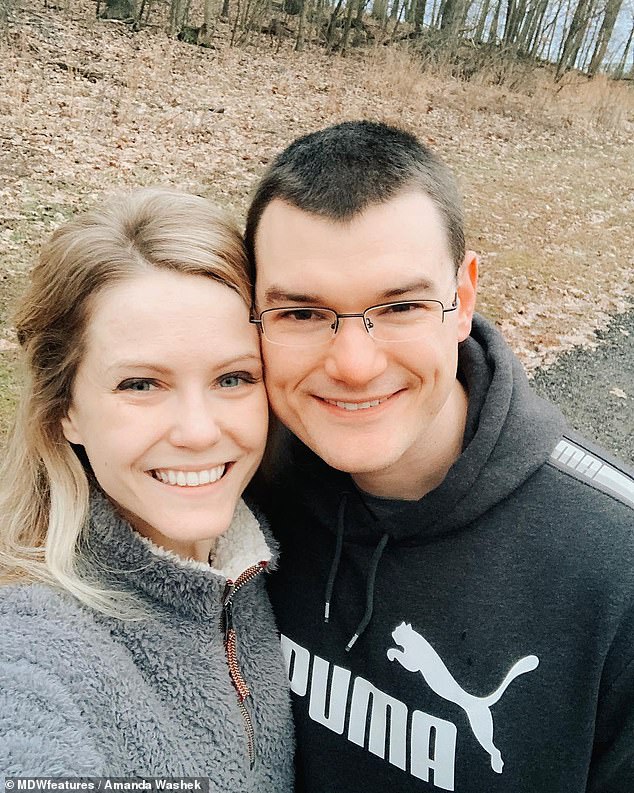 The recovery process hasn’t been without bumps, but, Washek says, ‘I feel I have conquered the worst of it. I have done the hard parts: the waiting, the uncertainty, the surgery, and the first big virus after transplant’ 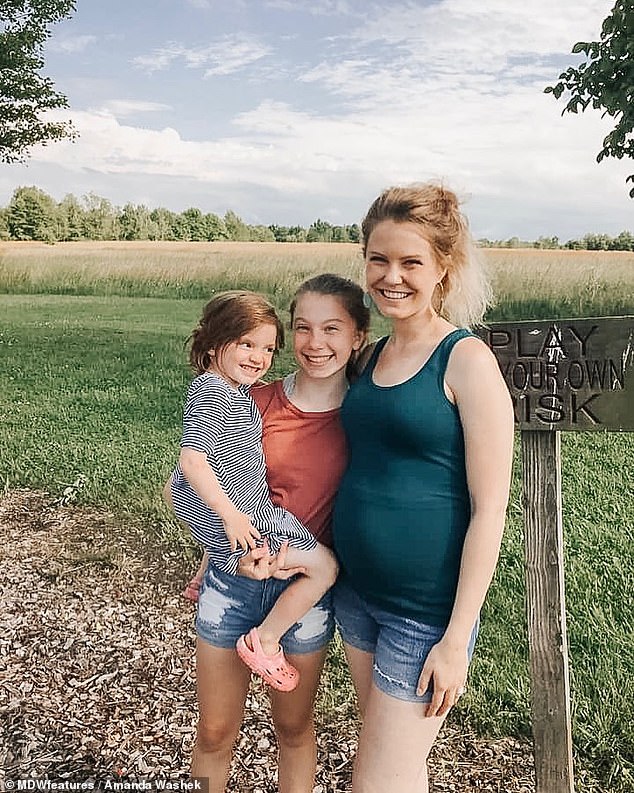 In February this year, she discovered she was pregnant and about a month along 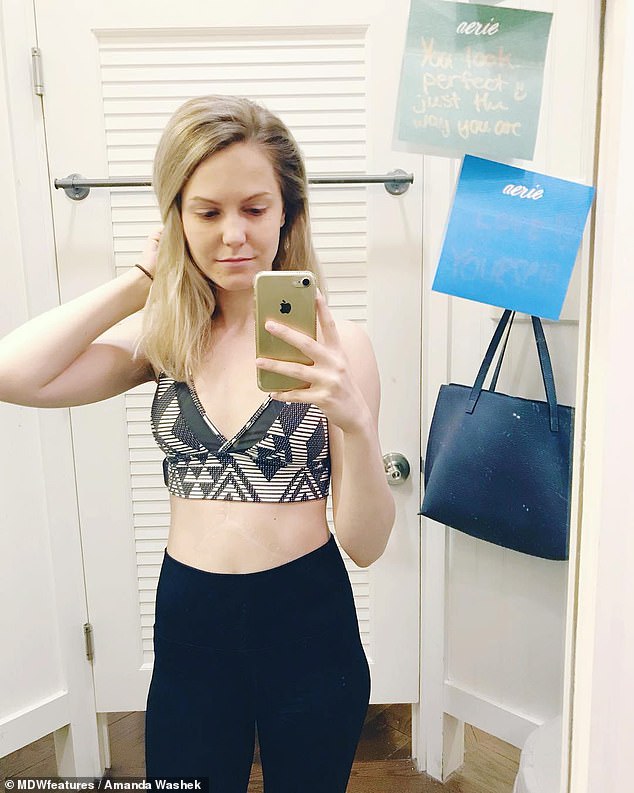 Doctors were able to monitor Washek’s condition for two weeks and she was diagnosed with primary sclerosing cholangitis (PSC) in May, a condition she’s believed to have had for most of her life but had progressed rapidly in the months prior to being admitted

The only effective treatment for the condition is a liver transplant, but doctors assured Washek that she wouldn’t need one for another five to 10 years.

Unfortunately, after being monitored, her condition continued to decline, and she was listed for a transplant in September 2014.

It became apparent that Washek wouldn’t survive if she didn’t get a liver transplant soon, so she was instead listed for a living donor and the first living donor to speed up the process.

‘I spent a few months waiting for the phone to ring, willing my doctor to call with the bittersweet news that someone had died, and their liver was a match for me. I was on constant alert,’ said Washek.

‘After a few months at a standstill, my hepatologist suggested a living donor. It is remarkable, but because the liver regenerates, living donation is possible. I resisted this idea for a while, but I was waiting for a deceased donor but wasn’t moving up the list.

‘I eventually gave in when I realized, I was getting sicker but wasn’t any closer to receiving my transplant.’ 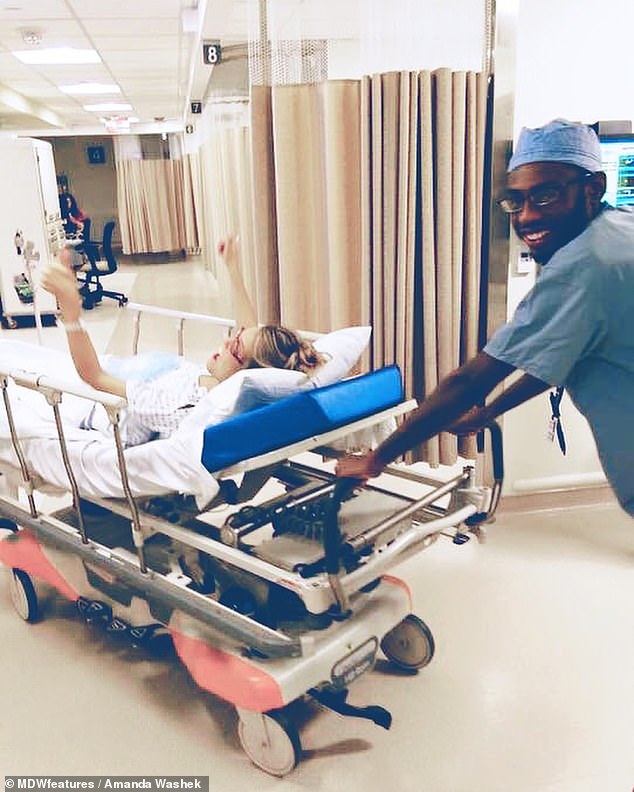 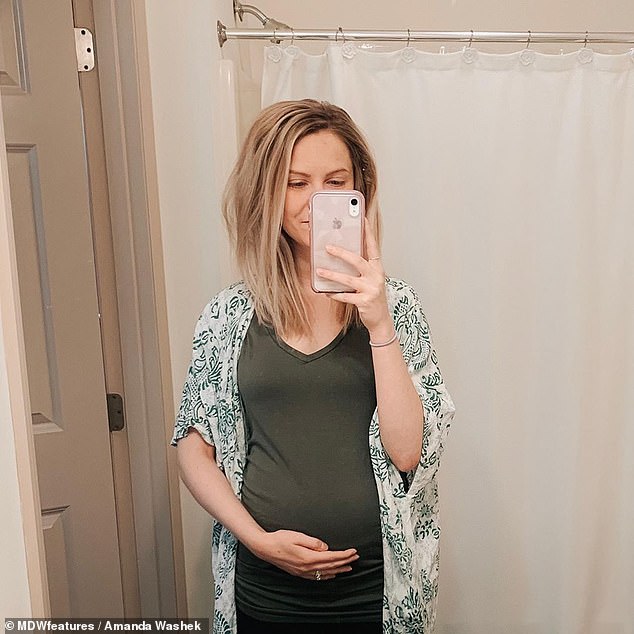 Now, Amanda is sharing her story to encourage others to donate organs

READ  Pancreatic cancer warning - does your urine look like this? How to check for cancer in wee

Incredibly, an old school friend stepped up: Maddie, now 28, who was working with Washek’s mom and volunteered as soon as she heard what was going on.

At long last, they received word that Washek would receive 65 percent of Maddie’s liver on August 11, 2015.

It gave them two months to prepare.

‘It doesn’t sound like a lot of time, but when you are simultaneously excited, exhausted, sick, scared, and ready, it’s long enough,’ Washek said.

The recovery process hasn’t been without bumps, but, Washek says, ‘I feel I have conquered the worst of it. I have done the hard parts: the waiting, the uncertainty, the surgery, and the first big virus after transplant.’

‘I will always be monitored, and there is a small possibility of my PSC returning, but there is also a huge possibility that it will not,’ she added.

Then in February this year, she discovered she was pregnant and about a month along.

‘It was amazing news!’

Now, she is sharing her story to encourage others to donate organs.

‘It’s so important that people understand organ donation and its importance. The waiting list is so long and there are simply not enough organs to go around. Much of this is due to myths and fear surrounding donation and I hope sharing my story will help.’

Vitamin B6 warning: Six problems that can occur if you have too much of the vitamin

Dear Coleen: I'm devastated that my beautiful daughter may not be mine

Episode 1: what does it mean to be human? – podcast

Episode 2: who decides what should happen next? – podcast

Should we edit our DNA? The Gene Gap – watch and listen

US housing starts total 1.191 million in July, vs 1.24 million expected

Brave woman with thousands of tumours on her skin reveals how she refuses to...

Paul Young health: ‘I am still recovering from it’ – pop star reveals nasty...