I want to give the rest of the country a taste of Quaglino's, says restaurant boss


Des Gunewardena bursts through the door of Sartoria, his Italian restaurant on London’s Savile Row, greeting the manageress with an effusive ‘Buongiorno!’

Dressed in a blue cord jacket and navy jeans, he blends in with the French hedge fund managers holding breakfast meetings over macchiatos, but it’s clear he’s the boss.

‘You’ve taken my usual table,’ he jokes to a group sitting by the window. The guests laugh – his friendly remark is clearly meant in jest – but minutes later they are gone. 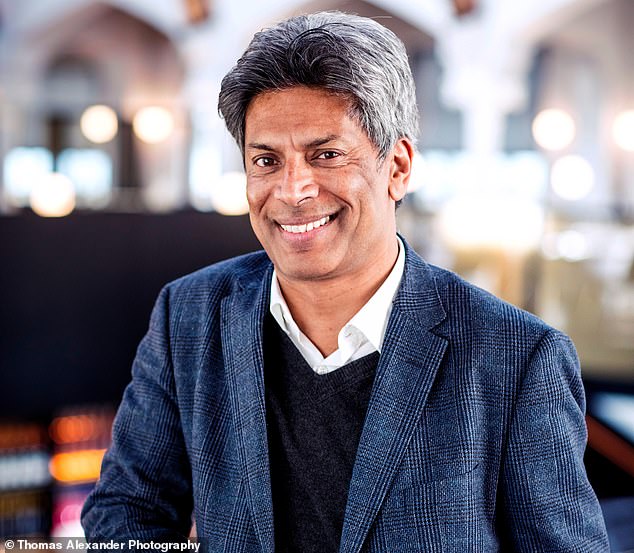 If Gunewardena, a smooth Sri Lankan-born entrepreneur, is not a celebrity outside the fine dining scene, many of the 44 restaurants he runs through his firm D&D London are household names.

Quaglino’s – or ‘Quags’ to many of its patrons – has Royal connections, hosting the Queen and Prince Philip’s first public date and allowing Princess Diana to slip out via the kitchen to avoid the paparazzi.

The cast of TV show Made In Chelsea are regulars at D&D’s Bluebird in Chelsea while its Paternoster Chop House is the set for the Channel 4 show First Dates. ‘We don’t have a strategy for getting celebrities,’ Gunewardena insists. ‘It just happened to us.’

All around him, other restaurants – both high-end and mid-market – are closing their doors. Last week, it emerged that one of Britain’s best-loved chains, Pizza Express, could be sunk by its £1.1billion debts.

D&D London, which was formed by a management buyout of Sir Terence Conran’s eponymous restaurant group, has around £35million of bank debt, and posted a £5.7million pre-tax loss in its latest accounts, up to March 2018.

But Gunewardena says both revenues and profits are up this year, with sales from his restaurants set to rise by £13million to £145million in his firm’s next trading update. So instead of keeping his head down, he is plotting a big expansion. 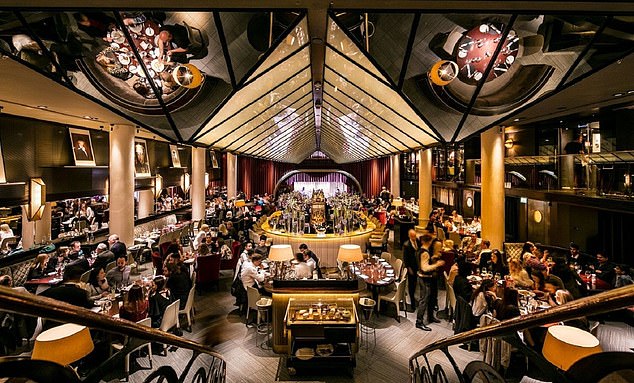 Bon Viveur: Quaglino’s is one of 44 restaurants run by Des Gunewardena, of D&D London

Next month, D&D will open a £5million restaurant called 14 Hills, located ‘bang in the middle of the insurance market’ near Liverpool Street station.

The lease on another East London site is being negotiated, and D&D will open a restaurant next to Harvey Nichols in Bristol next Easter as the group continues expanding outside the capital. When 14 Hills opens in November, naturally there will be a party.

‘We’ll have some interesting people there,’ Gunewardena grins.

So why is he so confident when rivals such as Jamie Oliver are in his words ‘going down the tubes’? According to Gunewardena, it’s because many of those eating out are avoiding soulless chains, instead seeking out ‘excellent service and atmosphere’.

He says: ‘Customers are looking for quality and authenticity, and in increasing numbers they prefer to go to restaurants with individuality, like ours, rather than branded chains.

‘We have always understood this and many of our venues are talked about as much for their buzz and atmosphere as for the food and wine they serve. We allow our chefs and managers to run their restaurants as if they are independent businesses. Therefore they haven’t suffered the lowering of quality that a number of rival restaurant groups have been affected by as they have grown.’ 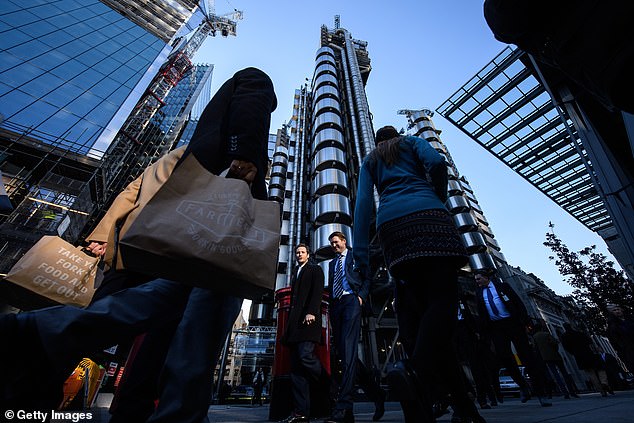 Next month, D&D will open a £5million restaurant called 14 Hills, located ‘bang in the middle of the insurance market’ near Liverpool Street station

Of course, he can’t shrug off the economic chill completely. When pressed, he admits sales growth is not as strong as in previous years due to a slowdown in corporate spending. ‘We are seeing flat trading,’ he says. ‘That always happens when you have potential financial or political crises – the corporates become more cautious. But I’m hoping we’ll see a bounceback after November.’

Gunewardena, 62, started his career as a strategist for property tycoon Gerald Ronson after qualifying as an accountant at Ernst & Young. It was the buccaneering late 1980s and Ronson – later jailed as one of the ‘Guinness Four’ in a share-dealing fraud – was empire-building with bravado, buying banks in Arizona and building skyscrapers in Manhattan. ‘He had plenty of money,’ chuckles Gunewardena.

He then left to work for Conran, eventually running his restaurants business during the Cool Britannia era of the 1990s. When Gunewardena and his business partner David Loewi – the other ‘D’ in D&D – bought out Conran Restaurants in 2006, the process was initially friendly but soured in a legal dispute.

Pointedly, Gunewardena says of Conran, his former mentor: ‘People always say [of D&D] ‘you’re the Conran guys’. But actually we’ve opened more restaurants as D&D than we did as Conran.’ 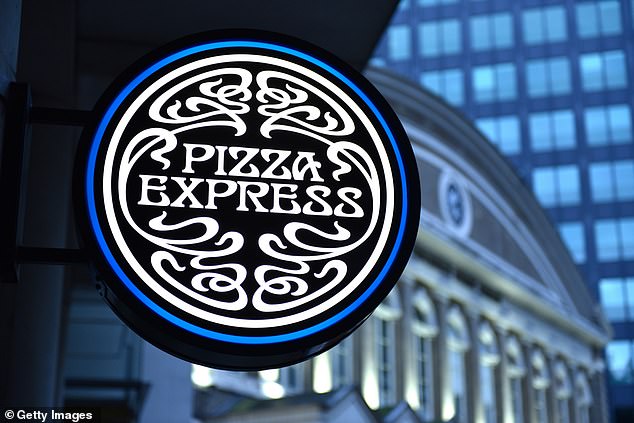 Struggling: Pizza Express could be sunk by its £1.1billion debts

Over the past three years, openings in Manchester, Leeds and New York have diluted the group’s emphasis on London, with a quarter of its restaurants now in the UK regions or overseas. This trend will continue, Gunewardena reveals.

D&D is in talks with US property firms to open further sites in New York and other major US cities.

Gunewardena says America is a ‘tough market’ and his two latest New York restaurants – Queens-yard and an outpost of Bluebird – are still ‘trying to get a return’. He adds: ‘When you open a restaurant, everyone comes. Then the challenge is how to maintain your revenue and continue to grow. Our plan, if things go well, is to expand more in the US. But if we do it, we are keen on making sure expansion is properly grounded.’

Gunewardena is happy for D&D to remain a private company, after scrapping plans to float in 2015. He jokes that his role as a non-exec on listed firm Fulham Shore, which owns pizza chain Franco Manca, has given him enough of a taste of public markets. ‘I want to stay under the radar,’ he says.

As he leaves – to meet entrepreneur Dominika Sadowska about letting customers use D&D restaurants as offices in the day – he says: ‘It’s no use opening a ton of restaurants and they all lose money.’

With his trademark smile, he adds: ‘We don’t close restaurants.’ 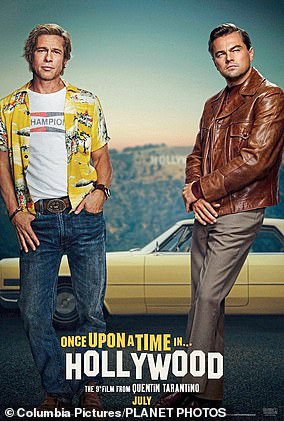 Quentin Tarantino’s latest movie, Once Upon A Time In Hollywood

Family: Married to Liz, a former project manager for British Gas and Arup, with two children Saskia, 27, and Dom, 25.

Lives: In a flat in Clerkenwell, Central London, during the week and Wimbledon, South West London, at weekends.

Favourite film: Quentin Tarantino’s Once Upon A Time In Hollywood. 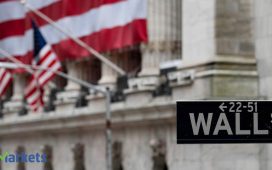