In the battle of Trump personalities, 'Tariff Man' is winning, and Wall Street isn't ready for it

Two of President Donald Trump’s priorities — a strong stock market and a tough China trade deal — are at odds. The conflict is frustrating Wall Street as it chases a moving target of pricing in a particular outcome.

Traders are hanging on the president’s every word looking for an easing in his rhetoric and a potential softening in the ongoing trade war.

If tweets are any indication, the president’s focus is shifting. In the past two weeks, his Twitter mentions of trade-related terms were double his mentions of the economy and stocks. 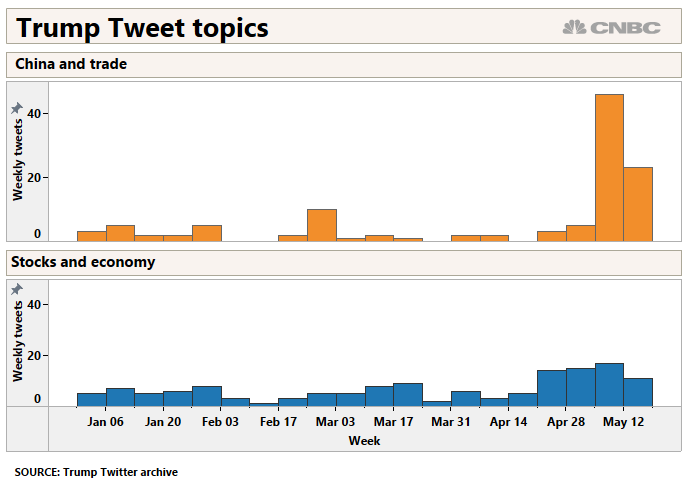 Year to date, Trump has tweeted about seven times per week on the subjects of China, trade and tariffs — the same average frequency for jobs, stocks and the economy. During the week of May 5, though, his China and trade mentions rose to roughly 46 times, while he mentioned economy-related phrases about 17 times, according to analysis of his Twitter feed. There is some overlap, as he occasionally bundles multiple subjects in the same tweet.

“Tariff Man,” as Trump once described himself, is winning the battle of the president’s personalities, and “Dow Man” is just going to have to take a back seat for a while.

Wall Street analysts find the job of predicting the president’s mindset on a daily basis for clients to be a difficult task.

“It’s impossible — the risk reward here is that almost all of this is at the discretion of President Trump,” Raymond James Washington policy analyst Ed Mills said. “You can’t know entirely what his intentions are.”

On one hand, Trump is appealing to his base with a tough stance on trade ahead of the 2020 election. But economists say less trade between the world’s largest economies threatens to dampen growth, at least in the near term.

That is taking a toll on global growth expectations and therefore the stock market. The Dow Jones Industrial Average — Trump’s go-to report card for a strong economy — dropped 600 points Monday following new rounds of retaliatory tariffs. It rallied on Tuesday on more trade optimism and again moved higher on Wednesday. Overall, the Dow is down a little more than 3% since Trump escalated the trade war 10 days ago by tweeting a threat to raise tariffs on China, which he followed through with on Friday.

READ  Jeremy Corbyn, a leader whose time has finally come

“The problem is that the president has two conflicting polls here,” Fundstrat Washington policy strategist Thomas Block told CNBC. “He obviously watches the Dow and has friends who probably call him up and say, ‘Donald, we’re getting killed’ — that’s why that’s one side of Donald Trump. But there has also emerged a very political side.”

The political side has increased tariffs from 10% to 25% on $200 billion in Chinese imports. The U.S. is also taking necessary legal steps to slap another round of 25% tariffs on $300 billion of imports, which would happen in June at the earliest. Block highlighted uncertainty that he said is leading him to tell clients to “stay on the sidelines.”

“If I felt I understood Donald Trump’s mind better than anybody else and had a high level of confidence about the outcome, Fundstrat would have to pay me more money than they could afford,” Block said.

Block said his instinct is that “some sort of agreement” gets done around a June G-20 meeting. But he said Trump’s priorities, and therefore public stance, could change last minute.

Isaac Boltansky, director of policy research for Compass Point Research & Trading, is also navigating this fickle market. He said clients are “cognizant of the fact that this narrative can turn on a dime.”

“The near-term sentiment shift has been undeniably warranted given recent developments, but investors recognize that the president could change market sentiment with a single tweet,” Boltansky said.

Trump rolled out the “Tariff Man” persona in a tweet in early December, a month that saw the S&P 500 drop 9.2% in its worst month since the financial crisis.

READ  Mortgage applications surge, but coronavirus is the wild card that could chill spring homebuying

But the approach has played to his base and is part of the campaign’s strategy heading into 2020. Trump is also using the stance as ammo against Democratic candidate and former Vice President Joe Biden, who supported the Trans-Pacific Partnership.

“Tariffs are focused right at the electoral map of Trump, particularly farm states,” said Dan Clifton, a partner and head of policy research for Strategas Research Partners. “At the same time, Trump can make a convincing case that Biden has been weak on China, and a standoff with China benefits his re-election.”

China has responded to U.S. tariffs with its own hike on $60 billion worth of U.S. goods. That hits farmers at “every single angle,” according to an economist at the American Farm Bureau Federation. To curb the effect of Beijing’s retaliatory duties, Trump said this week that farmers would receive about $15 billion in aid. His campaign is betting that farmers will support Trump despite the hit to American agriculture.

“A deal with China to end their bad behavior would provide even more long-term benefit to the economy,” Tim Murtaugh, the Trump campaign’s communications director, told CNBC. “Farmers are patriotic and understand that someone had to finally call China to account.”

Murtaugh also pointed to a booming economy, another rallying point ahead of 2020. GDP growth in the first quarter grew by 3.2% — its best start to a year since 2015. In April, unemployment fell to its lowest level since 1969.

10% drop before he changes tune

But changes in trade winds threaten that boom, according to multiple economists. One estimate from Oxford Economics puts the loss per household around $500 at the current tariff levels. If the White House adds tariffs to all Chinese imports, the U.S. economy would be about $100 billion smaller by 2020, translating to an $800 loss per household.

“U.S. policymakers are willing to accept some pain because they believe the pain imposed on China will be greater than the U.S. and force China back to the negotiation table,” Clifton said. “The key is how this impacts the economy.”

Raymond James’ Ed Mills said stocks still have room to fall before Trump eases rhetoric on the deal. Equities would have to experience a correction of at least 10% “before Trump starts talking up the prospects of a G-20-timed deal,” Mills said. Trump and his Chinese counterpart, Xi Jinping, are expected to meet at next month’s G-20 summit.

“China made a calculated decision that there’s only so much pain that the Trump administration is willing to take from the equity markets before it changes its tune,” Mills said.

According to former White House chief strategist Steve Bannon, the chances Trump folds are slim. In a CNBC interview Wednesday, Bannon said there is “no chance” the president will back down in the global standoff.

“It would be very easy for him to sign a deal where they bought more soybeans and have the cheerleaders on Wall Street say this is terrific, and have the stock market go up for a moment,” Bannon told CNBC’s “Squawk Box” Wednesday. “This cuts to the core of what the United States is going to be in the future.”

WATCH: Bannon on whether Trump will back down in China trade war