In their quest to improve input options for wrist-based wearables, smartwatch developers such as Google and Samsung have spent years developing virtual touchpads that watches could sense on your forearm or the back of your hand. Today, Texas-based Innoventions announced that it has won a patent on the concept, which if implemented properly could broaden user interactions with next-generation wearables.

The Innoventions patent may sound familiar if you’ve been closely monitoring the smartwatch space over the last few years: Cameras in the watch’s left and/or right sides monitor trapezoidal areas of adjacent skin surfaces for gestures, including taps, drags, and hovers. Since your wrist may tilt on different angles from the watch, the camera system is able to compensate for perspective shifts, and see differences in input finger elevation, properly detecting motions such as writing letters, pressing buttons, or using multi-finger pinch and zoom gestures that mightn’t be comfortable on the screen.

Innoventions notes that the defined area doesn’t need to be perfectly square or rectangular — the user is prompted by the watch to define four corners of the skin surface to be monitored. Additionally, multiple virtual touchpads can be used at once if there are cameras on both sides of the watch, assuming there’s some way to reflect the inputs on the wearable’s screen.

Offloading inputs to the back of a hand or forearm could empower both smaller watches and larger inputs, decoupling the size and visibility of the display from its ability to be controlled by touch. Wrist-based camera and input technology could be especially important if smartphone functionality continues to shrink into wearable form factors and pair with AR glasses, requiring novel control and interaction systems that won’t be dependent on five- to seven-inch touchscreens.

Innoventions is now licensing its virtual touchpad technology to smartwatch makers, and notes that another related patent is pending. It’s not the only company with protected IP in this field: Google notably won a patent in late November 2018 covering the use of ultrasound for similar adjacent surface tracking — similar to the Motion Sense system in Pixel 4 phones — while Samsung in February successfully patented a combined projector and camera system that would display and monitor a virtual user interface on the body. By contrast, researchers at Carnegie Mellon University proposed SkinTrack, an alternative using watch-based electrodes to track the movement of a finger-based electrical ring. 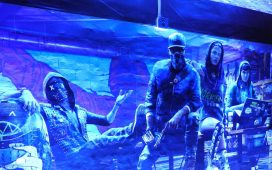 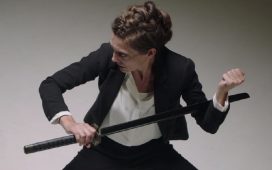