BRIDGETOWN, Barbados – It’s easy to overlook but hard to overstate that the Internet really is a network of humans. This lattice of professional and personal relationships—this Internet of Humans—includes those who design, build, maintain, secure and use the physical networks that make up the global Internet.

In the Caribbean, the significance of human networks to the region’s digital destiny is even harder to ignore.

This was clear in the recent regional meeting of the Caribbean Network Operators Group, or CaribNOG, held in Bridgetown, Barbados on April 10 to 12.

This gathering of computer experts from the global Internet community and dozens of other stakeholders from across the Caribbean put a spotlight on the importance of deepening the human interconnections that undergird the region’s physical networks.

What started in 2010 as a small group of Internet experts committed to building capacity in the technical community has evolved into a region-wide quest to strengthen the human networks that support the growth and evolution of the Internet, which in turn plays such a vital role to the region’s continued development. 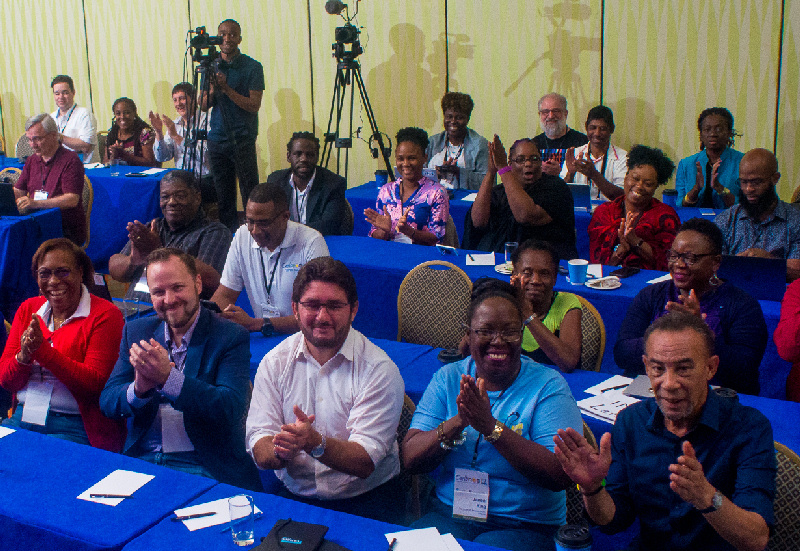 “CaribNOG is a vibrant community of systems administrators, cybersecurity experts, software engineers and network managers from across the Caribbean, who gather twice a year to share knowledge, experiences and networking best practices. The tagline ‘Networking for Caribbean Development’ sums up the trajectory of CaribNOG’s evolution. The activities and projects geared towards activating members of CaribNOG’s volunteer-based community has already produced tangible value for the Caribbean and even for the global Internet community,” said Bevil Wooding, a CaribNOG co-founder and the Caribbean Outreach Liaison for the American Registry for Internet Numbers (ARIN).

“Our organisation has played a pivotal role in the training of network engineers from across the region and has forged partnerships with regional and international organisations to help build and strengthen Internet infrastructure throughout the Caribbean. CaribNOG is just one of several Network Operators Groups, and Internet organisations functioning across the world,” said Stephen Lee, CaribNOG program director and CEO of ArkiTechs Inc., a technology services firm operating in the Caribbean.

At CaribNOG’s seventeenth regional gathering held recently in Barbados, representatives of NANOG, their North American counterpart, were on hand to share technical expertise, updates on activities, and to welcome members of the CaribNOG community to participate.

Other Internet organisations were also represented including ARIN, the Internet Society, the Internet Corporation for Assigned Names and Numbers (ICANN) and the Latin American and Caribbean Internet Addresses Registry (LACNIC).

“NOGs are about community, about networking people. The Caribbean region needs CaribNOG, a focused group of people who are on the ground, in the trenches, who understand the needs that exist there in that region,” said Edward Mc Nair, executive director of NANOG, who delivered the keynote.

“I think that anything that we can do as a region to foster greater regional collaboration is really excellent. Now that we have engineers from multiple countries expressing a very clear interest in collaborating, in sharing materials about what are their experiences and what best practices they endorse, that this is only going to bode well for the Caribbean, in terms of the network resilience, network security and making sure that we can attract new professionals into the security to make it even better than it is today,” said Peter Harrison, CTO of Silicon Valley-based Colovore Inc. and member of the ARIN board of trustees.

Attendees at the recent CaribNOG community have been increasingly vocal in their support for the nine-year-old organisation.

“I feel like the meeting gave me exactly what I need to go back to my country and be the first non-Internet service provider to provide Internet connectivity,” said Yves Ephraim, a participant from Antigua and Barbuda.

“I thought a lot of what was discussed was particularly important,” said David Smith, president of the Barbados chapter of the Internet Society, which provided local coordination services, including a remote hub in a computer lab at the The University of the West Indies Cave Hill Campus.

“We’re seeing a rise in phishing and ransomware attacks, so I found the CaribNOG meeting to be very helpful in pointing out specific strategies and technical solutions to safeguarding our networks,” he added.

“I’m looking forward to not just the next CaribNOG meeting but the continued interaction and engagement because that’s extremely important in the region,” said Gerry George, a regulator and tech specialist from Saint Lucia.

“We’re realising that there’s lots of resources available across the region that we individually don’t know about, and so networking is very important. The technical stuff that we do is actually easy. It’s getting the people together and ensuring that the policies actually work in our interest.”

The work of CaribNOG is far from over. The group’s mandate to build out critical Internet infrastructure and improve connectivity, resiliency and security remains an urgent remit. But its work to more deeply interconnect the Internet of humans that will drive the next wave of Caribbean development is only just getting started.

Pension scam warning: Victims losing £80,000 on average – what should you watch out...

What to Watch: Waitrose, Unilever, Samsung