The Internal Revenue Service has started sending out stimulus payments on prepaid debit cards and staffing a phone line to answer questions about the payments, but as of yet, there’s no option to talk to a live person on that number.

This week, the IRS began sending nearly 4 million economic-impact payments by prepaid debit card, instead of by paper check. The card comes from Metabank.

People can use the prepaid cards to “make purchases, get cash from in-network ATMs, and transfer funds to their personal bank account without incurring any fees. They can also check their card balance online, by mobile app, or by phone without incurring fees,” the U.S. Treasury Department said in a news release Monday.

There are fees for other uses such as withdrawing money from an out-of-network ATM ($2 plus fees charged by the ATM operator, though the $2 fee is waived for the first transaction); a balance inquiry by ATM (25 cents); withdrawing cash from a bank teller ($5 after the first withdrawal); and replacing a lost or stolen card ($7.50 plus $17 for faster delivery). 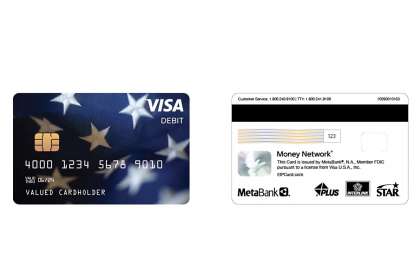 The IRS will continue sending out checks as well. Adding prepaid cards to the mix will enhance its check-printing capacity so it can send out more payments more quickly, Lauren Sanders, an attorney with the National Consumer Law Center, said in an email. Also, people without a bank account and those sheltering in place can use the cards without leaving home or paying fees to a check casher. Most people can avoid the debit-card fees, she added.

To activate the card, users will have to call a phone number and provide some information to verify their identity.

The debit card “is an attempt to shorten the 20-week timeframe for paying all eligible Americans. Due to technology constraints, the IRS only can mail about 5 million paper checks each week,” Erin Hatch, a spokeswoman for the U.S. House Ways and Means Committee, said in an email.

On Monday, the IRS, whose customer-service phone lines have been closed for months, said in a news release that it is “starting to add 3,500 telephone representatives to answer some of the most common questions about Economic Impact Payments.” The release did not give the number, but a spokesman said it was 800-919-9835.

However, when I made multiple calls to that number Monday and Tuesday, there was only recorded information and no option to speak to a live person. The IRS has not explained why. Hatch said an oversight subcommittee has “reached out to the IRS about that.”

Still looking for your payment?

As of May 8, about 128 million stimulus payments had been made, but it’s unclear how many remain.

“If your return included direct deposit information, you should have been paid in April,” according to an update from the committee.

If you filed a 2018 or 2019 return and did not have a refund deposited into a bank account, you had until May 13 to enter your banking information into the IRS “Get My Payment” portal to get a direct deposit. If you did not get a direct deposit, you will receive a paper check or prepaid card. Checks are being issued “in reverse ‘adjusted gross income’ order — starting with people with the lowest incomes first,” the committee said.

It turns out fraudsters have also used that non-filers tool to get payments, said Crane Hassold, senior director of threat research with Agari, an email-security firm.

Between April 15 and April 29, a “Nigerian cybercrime group” called Scattered Canary filed at least 82 fraudulent claims for stimulus payments using this tool for non-filers, Agari said in a report issued Tuesday. At least 30 of them were accepted by the IRS and presumably paid out, apparently onto Green Dot prepaid cards, it said. “For the other 52, we just don’t have confirmation,” Hassold said.

Agari said the ring may have filed the claims using W-2 forms it got through “phishing” emails purporting to be from a top executive to human resources people seeking employee payroll information. “Phishing attacks targeting a quickly growing remote workforce have increased significantly,” the report said.

Hassold said he believes Canary also is using such information to file fake unemployment claims in some states. Agari has evidence showing it filed at least 174 fraudulent claims in Washington and 17 with Massachusetts. Canary is likely only one of such groups exploiting the IRS and unemployment offices, he added.

On Saturday, the website Krebs on Security reported that “a well-organized Nigerian crime” group is “committing large-scale fraud against multiple state unemployment insurance programs, with potential losses in the hundreds of millions of dollars.”

Krebs reported seeing a memo from the Secret Service that said the ring has been filing unemployment claims using Social Security numbers and other information belonging to identity-theft victims, including from first responders, government personnel and school employees. It said the ring targeted Washington primarily, along with North Carolina, Massachusetts, Rhode Island, Oklahoma, Wyoming and Florida.

Asked if California has been hit with or investigated this type of fraud, the Employment Development Department said in an email that it “monitors claims and has an identity verification system in place to help ensure the individuals are who they say they are when applying for Unemployment Insurance (UI) benefits.”

It added: “The department is able to validate the majority of individuals who provide additional documentation, and the requirement serves as a deterrent to those attempting to commit fraud.”

Sepio Systems Appoints Top Female Leaders in Security to Form New Board of Directors in the U.S. – Herald-Mail Media