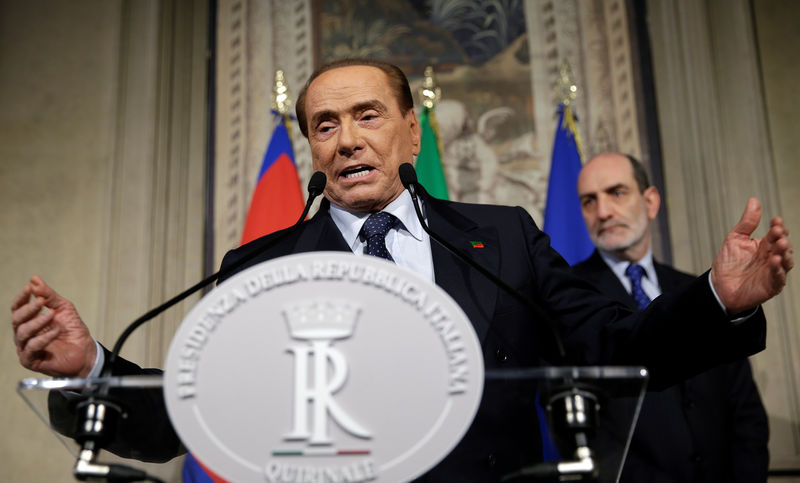 ROME (Reuters) – Former Italian Prime Minister Silvio Berlusconi said on Thursday he will run in May’s European parliamentary election, standing as a candidate for public office for the first time since being found guilty of tax fraud in 2013.

Berlusconi, 82, a flamboyant media mogul and scandal-prone centre-right politician, was expelled from the upper house Senate and barred from office after his graft conviction.

However, the ban was lifted in May last year, allowing him to return to the electoral fray.

“At my ripe old age, I have decided out of a sense of responsibility to go to Europe, which lacks a deep world vision,” the perennially tanned Berlusconi told supporters on the Mediterranean island of Sardinia.

Having his name on the top of his Forza Italia (Go Italy) party’s EU ticket will boost its visibility and almost certainly ensure his election. But there is no guarantee that once he has won a seat, he will spend much, if any time in Brussels.

Italian leaders often put themselves forward in European votes only to then focus on domestic politics after the ballot.

One of Berlusconi’s biggest political controversies kicked off in the European parliament in 2003, when, in his capacity as prime minister, he compared a German lawmaker to a Nazi concentration camp guard.

Berlusconi said he wanted to stand in order to fight the 5-Star Movement, which has formed a coalition government with the billionaire businessman’s traditional ally, the League.

“We need to change this government, which includes the 5-Star Movement that is led by people who have no experience and are incompetent,” he said.

“The alliance (with the League) is not natural and I do not think it will last long,” he added.

Berlusconi campaigned for Forza in last March’s national election but said his inability to stand as a candidate hurt its chances and for the first time the group trailed the League, by 14 percent of the vote to 17.35 percent.

The centre-right bloc emerged as overall winners last March, but fell short of an outright parliamentary majority, opening the way for the League to split from its old allies and enter into a coalition with its former foe, the 5-Star.

Since then, Forza Italia has slid further, with most recent surveys putting it on 8.2 percent against 32.2 percent for the League, which is headed by Matteo Salvini and has jumped above 5-Star to become Italy’s most popular party.

Berlusconi has been prime minister four times in a political career beset by corruption and sex scandals.

He says he is the victim of leftist magistrates and has constantly defied his many enemies to overcome legal and health setbacks and return to frontline politics.