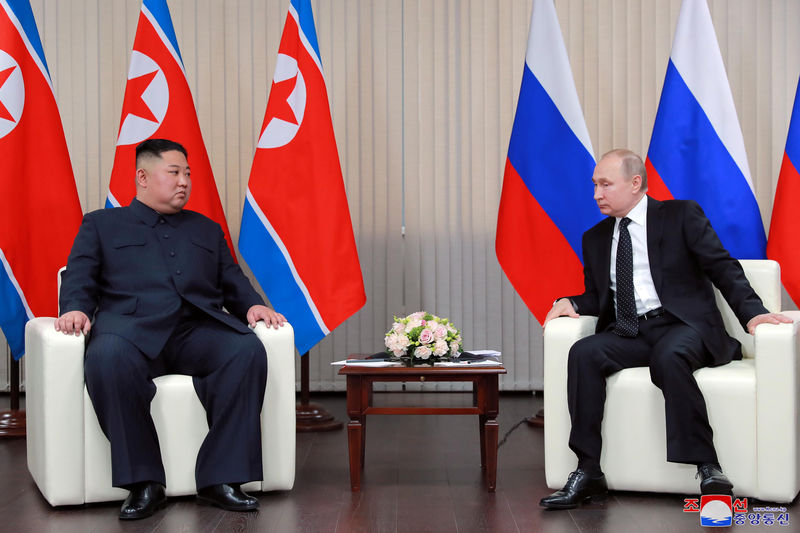 Kim’s remarks are seen as keeping pressure on the United States to be “more flexible” in accepting Pyongyang’s demands to ease sanctions, compared to the U.S. stance during his second summit with U.S. President Donald Trump in Hanoi in February which broke down, as Kim said earlier this month.

Kim said at the time he will wait “until the end of this year” for the United States to become more flexible.

“The situation on the Korean Peninsula and the region is now at a standstill and has reached a critical point where it may return to its original state as the U.S. took a unilateral attitude in bad faith at the recent second DPRK-U.S. summit talks,” KCNA reported Kim saying, using North Korea’s official name, the Democratic People’s Republic of Korea.

“The DPRK will gird itself for every possible situation.” Kim added.

The first face-to-face talks between Putin and Kim, held on an island off the Russian Pacific city of Vladivostok on Thursday, did not appear to have yielded any major breakthrough.

Putin said afterward he thought a deal on Pyongyang’s nuclear programme was possible and that the way to get there was to move forward step by step in order to build trust.

But any U.S. guarantees might need to be supported by the other nations involved in previous six-way talks on the nuclear issue, Putin said, which was seen as a way to use the summit to strengthen Russia’s diplomatic clout as a global player.

How Nerio Alessandri started Technogym, worth $2.4 billion, in his garage in Italy

US slaps sanctions on Iran's biggest airline and shipping group