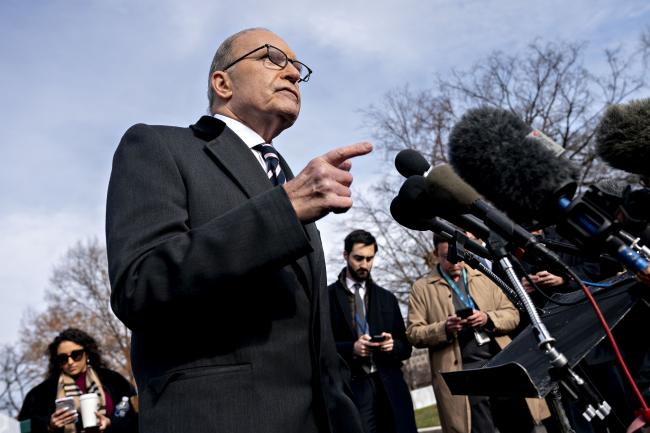 (Bloomberg) — Donald Trump’s top economic adviser said Tuesday the administration hasn’t made a decision about re-imposing steel tariffs on Brazil and Argentina, even though the president said last week the duties were “effective immediately.”

The director of the White House’s National Economic Council, Larry Kudlow, said at the Wall Street Journal’s CEO Council in Washington that reinstating tariffs has been discussed but there’s no decision yet.

Trump said Dec. 2 that the U.S. would restore the duties to punish the two Latin American countries for “a massive devaluation of their currencies” that he said had hurt U.S. farmers.

His action amounts to retaliation against two nations that have become alternative suppliers of soybeans and other agricultural products to China, grabbing market share away from the U.S. Rural voters, including farmers, are a key constituency for Trump as he heads into the 2020 presidential elections.

While the steel tariffs could crimp trade, the Latin American countries gain much more shipping crops to Chinese buyers. In the first 10 months of the year, Brazil has shipped $25.5 billion in farm products including soybeans and pork to China. That’s more than 10 times the value of steel and iron products sold to the U.S.

Disclaimer: Fusion Media would like to remind you that the data contained in this website is not necessarily real-time nor accurate. All CFDs (stocks, indexes, futures) and Forex prices are not provided by exchanges but rather by market makers, and so prices may not be accurate and may differ from the actual market price, meaning prices are indicative and not appropriate for trading purposes. Therefore Fusion Media doesn`t bear any responsibility for any trading losses you might incur as a result of using this data.
READ  Audi's electric SUV faces four-week delay because of software bug

Tech Suppliers Shift Away From China Despite Trump Tariff Delay