A collector, the Lakeville resident spends his free time perusing online sale sites looking for bargains. His basement is stuffed with Minnesota Twins memorabilia. But that night, he found something completely unexpected.

There on his screen was a dingy white canvas bag with his dad’s name, U.S. Navy service number and ship written in permanent black marker. The bag had been missing since the 1940s.

Johnson, 56, recognized the unique way his dad, Jerome “Johnny” Johnson drew his J’s to look like a fish hook.

A woman in Elk River was selling it for $20. He contacted her immediately and asked her to please hold it for him.

Johnny Johnson had served in World War II from 1942 to 1946. His mother had to sign for him because he was only 17 when he enlisted. 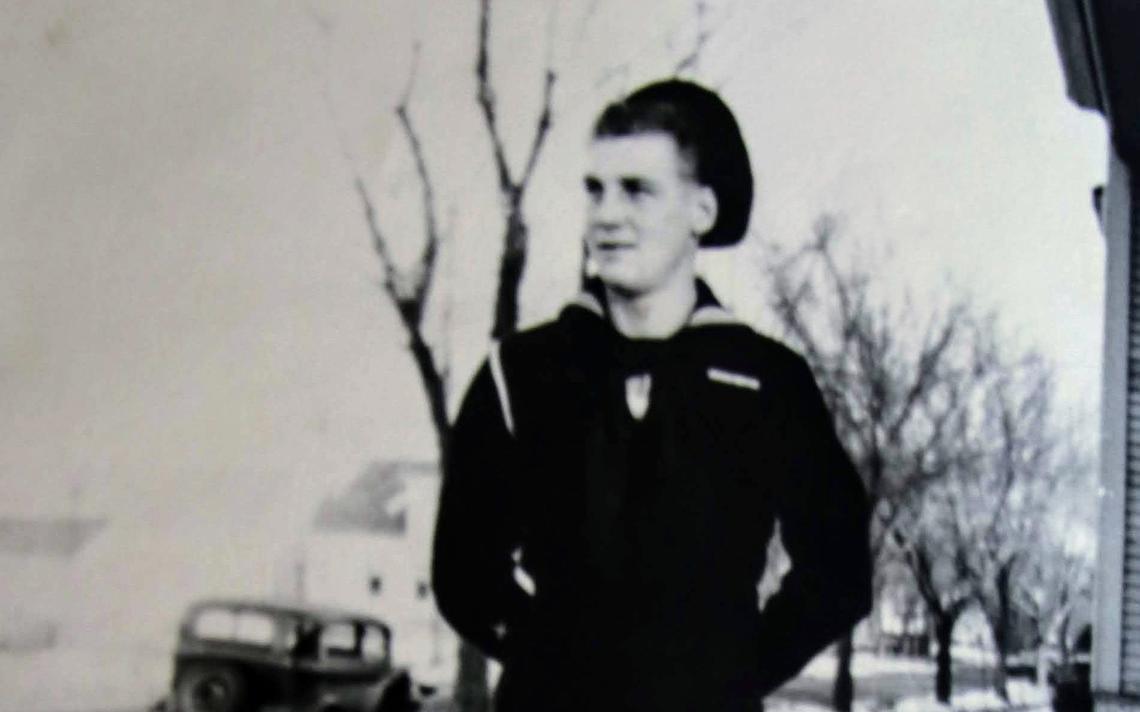 Jerome “Johnny” Johnson served on a U.S. Navy destroyer in World War II from 1942 to 1946. Courtesy of Wayne Johnson

The seaman spent much of his tour of duty on the U.S.S. Halford Destroyer, Fletcher Class, patrolling the Pacific Ocean and toting his belongings around in that white sea bag.

He was a mama’s boy who called her daily and mourned her bitterly when she died. He hated his first name, had a pilot’s license and loved to work on old cars.

When he died in 2001, Wayne Johnson combed through much of his dad’s stuff. Being a child of the Depression, his dad had a lot of stuff. Johnson found medals and a uniform and trinkets from far away lands, but never his sea bag.

“He saved everything,” Johnson said. “Why would he get rid of that? How did it end up in Elk River?”

The questions have not fully been answered for Johnson, who is a retired Minneapolis police officer and current insurance fraud investigator.

He talked with his mother who said she’s never seen the bag. He went through his dad’s paperwork and saw that one of his last assignments was in Florida.

The woman who was selling it, Cindy Olson, said she’d bought it at a garage or estate sale in Elk River over 20 years ago and had used it to store sleeping bags. She’d been cleaning out her house when she found it and decided to sell it.

When Johnson showed up to buy the bag, missing the first quarter of the Super Bowl, Olson gave it to him for free, telling him it was a gift from her and his dad.

“I felt his dad would want it that way, as just maybe his dad had something to do with Wayne spotting it and me listing it,” Olson said.

She couldn’t provide any other information on its origins.

While the investigator in him hates loose ends and unanswered questions, Johnson said he’s just happy to have another piece of his dad’s life to remember. He plans to put it in a frame and hang it in the garage, which he is renovating into a man cave.

“I’m more emotional than I thought I would be,” he said, his eyes misting up at the memories. “It’s got me thinking about my dad and stuff we did when I was a kid. I think I am a very lucky person.”

READ  Samsung Galaxy A9, Galaxy A7 available with instant cashback offers: Everything you need to know - BGR India

Samsung faces into a ‘window of golden opportunity’ – Business Post

5 iPhone, Android apps to download to kill the boredom in quarantine – FanSided