Lamar Odom has described how ketamine, a once-taboo club drug quickly gaining credence as a treatment for mental disorders, helped him overcome his anxiety and depression.

The 39-year-old former basketball player, who was married to Khloe Kardashian from 2009 to 2016, started struggling with alcohol and cocaine around 2011, when he was traded from the Los Angeles Lakers, where he had spent seven years.

In October 2015, he almost died: after a DUI charge, with growing concerns among teammates, falling out of the NBA, and being divorced by Khloe, he was found comatose at Dennis Hof’s Love Ranch brothel in Crystal, Nevada.

He had taken a herbal sexual stimulant, and suffered a cocaine overdose, multiple strokes, kidney failure, and numerous heart attacks.

The fact that Odom was able to walk out of his LA hospital ward less than three months later, shortly after New Year 2016, was remarkable, doctors said.

Today, in an interview on The Dr Oz Podcast, Odom says he ‘couldn’t process it’ and ‘I didn’t know where I was at’ in those first few months of recovery, but that ketamine helped him to deal with the mental health issues that drove him into addiction, allowing him to reach some kind of stability. 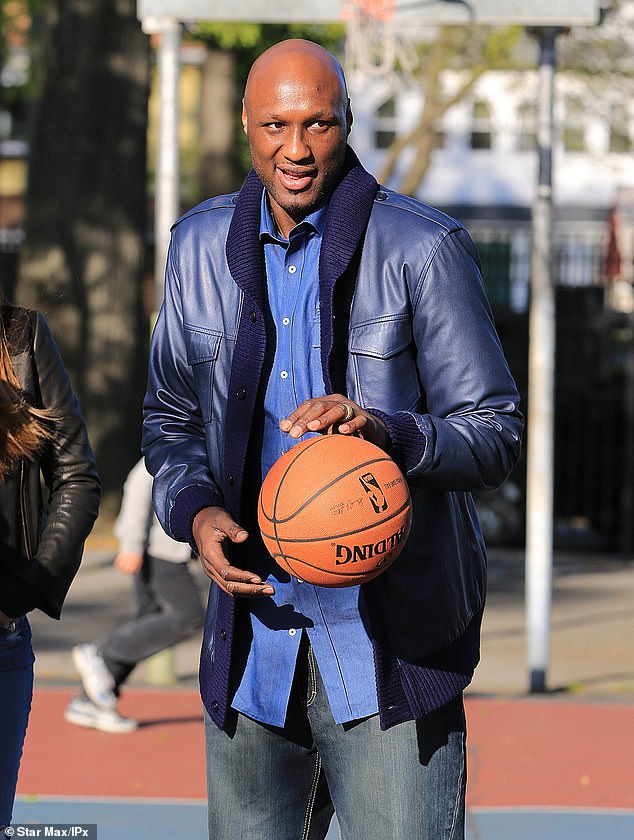 Lamar Odom almost died in 2015 after a drug overdose, heart attacks, stroke and kidney failure at the Love Ranch brothel in Nevada. He says ketamine helped him recover

‘I tried it and it started to work immediately,’ Odom said.

It was a close friend, with whom he is now running a CBD company, who recommended that he look into ketamine infusion programs in Utah, where researchers have been studying the drug’s therapeutic potential.

At first, he was hesitant.

His father, Joe, who has cared for him since his mom died of colon cancer when he was 12 years old, was a heroin addict, who was clearly still struggling when he appeared on Khloe & Lamar, the former couple’s reality TV spin-off show, in 2010. In recent years, Odom has described Kobe Bryant, his Lakers teammate, as the most stable father figure in his life.

READ  Multiple sclerosis could be cured in the next DECADE, researchers say

‘But if I could take this intravenous medicine and it could help clear my depression and anxiety and just make me better, open my third eye, then [I thought] I’ll do anything.’ 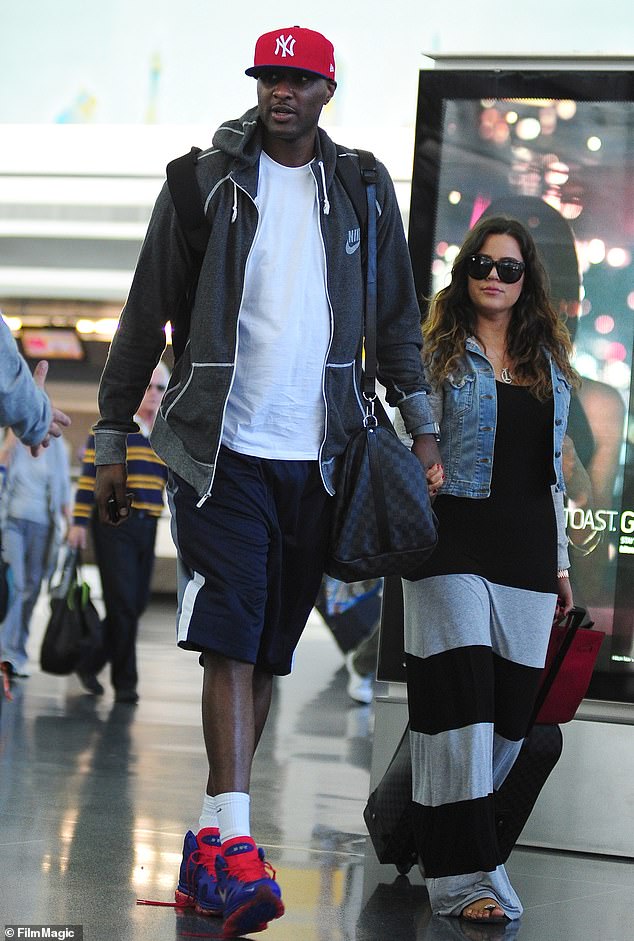 Odom was married to Khloe Kardashian from 2009 to 2016 (pictured together in 2012). He started battling with drugs and mental health in 2011. After being divorced by Khloe in 2015, he was found comatose at Dennis Hof’s Love Ranch brothel in Crystal, Nevada. He had suffered a cocaine overdose, multiple strokes, kidney failure, and numerous heart attacks 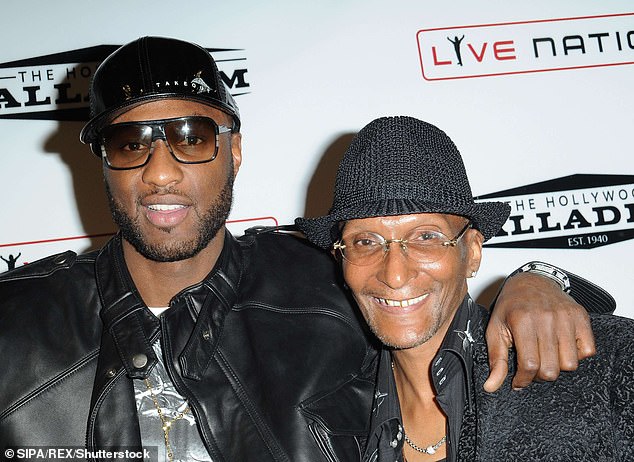 His father, Joe, who has cared for him since his mom died of colon cancer when he was 12 years old, was a heroin addict, who was clearly still struggling when he appeared on Khloe & Lamar , the former couple’s reality TV spin-off show, in 2010 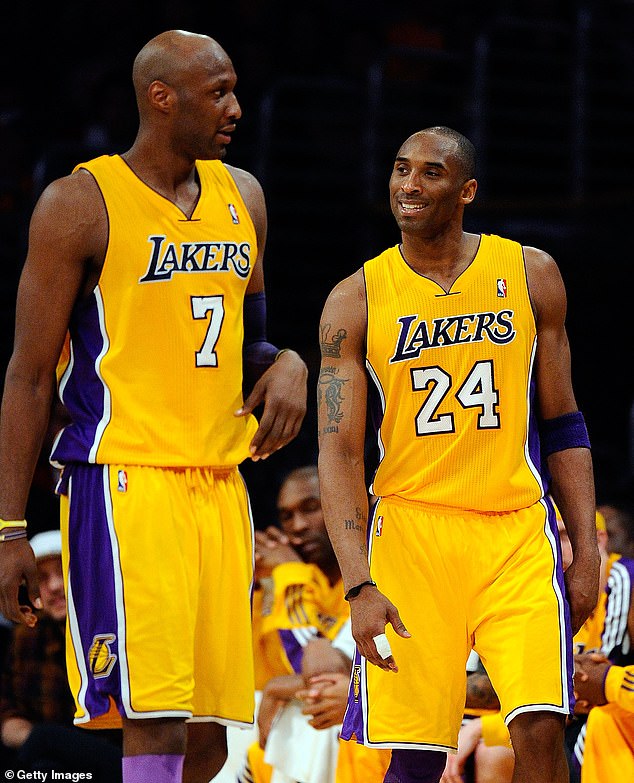 In recent years, Odom has described Kobe Bryant, his Lakers teammate, as the most stable father figure in his life

Odom said he can’t pin-point the drug’s exact effects but he felt an overall sense of relief from everything – depression, anxiety, PTSD, and his long-term struggle with empathy.

‘The first time I did it, it was like I went to heaven, I just felt all this, oh wow, love and emotion.’

‘Then, you know, you hallucinate.’

Most people who take medicinal ketamine, administered by a doctor, do not experience notable mind-altering effects like the hallucinations Odom described, though some do. For example, depression expert Dr Dan Iosifescu, a professor of psychiatry at NYU Langone Health, said one in six of his patients do so.

Ketamine is a powerful sedative.

It was first developed in the 1960s as an anesthetic for surgeries, and soon became used widely an effective tranquilizer for horses and elephants.

Over the next few years, it gradually seeped into the underground market, and by the 80s and 90s ‘ket’, ‘K’, or ‘Special K’, as it became known, was a stalwart on the club scene.

READ  What we wished we'd known about the menopause

It leaves users feeling disconnected, dizzy, drowsy, and in a dream-like state, and a heavy dose can cause nausea or vomiting.

Until this year, it wasn’t clear exactly why ketamine has that effect.

But the rate of depression has been steadily soaring for years. Today, more than 16 million Americans suffer from depression, and 30 percent of them have treatment-resistant depression, driving demand for alternatives to Prozac.

Ketamine started emerging as a candidate to plug that gap in the early 2000s, with extremely positive results, giving researchers a green light to keep studying it.

Now we know ketamine targets the brain very differently to our current crop of antidepressants.

While Prozac, a selective serotonin reuptake inhibitor (SSRI), maintains a balance of serotonin in the brain, ketamine targets a chemical called glutamate helping to restore connections in the brain worn down or broken by stress, anxiety and depression.

In clinical trials to test ketamine, the drug has proven effective for people with treatment-resistant depression.

And in March this year, the US Food and Drug Administration (FDA) approved a chemical cousin of ketamine, called esketamine, produced as a nasal spray by Johnson & Johnson, to treat depression. (Its effects are 99.9 percent the same as ketamine itself).

The spray can only be administered in a doctor’s clinic, and patients must have someone with them to escort them home.

But there are still research centers which offer ketamine as a transfusion, like the center in Utah which Odom attends.

Typically, patients get about two transfusions a week.

And he says he still feels the benefits, though his recovery is a constant, gradual, and slow process, and one that he has been sharing publicly as he tries to pivot towards entrepreneurship. 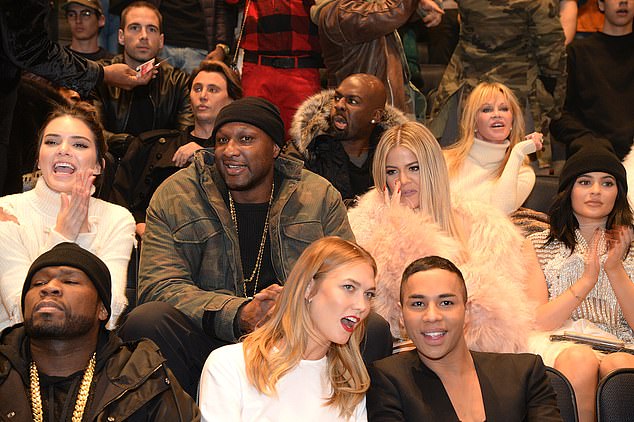 Odom’s plans to start a production company in late 2015 were derailed by his very public Love Ranch episode mere weeks later, sending him into retreat, at first with the Kardashians, and then with friends after Khloe finalized their divorce in May 2016. Pictured: Odom and the Kardashian clan in February 2016, a month after he left the hospital

Odom has admitted that drugs drove him to the end of his NBA career, petered out in 2014, earlier than expected. Amid concerns over his addiction and attitude, he was passed from the Lakers to the Dallas Mavericks for a season, to the LA Clippers for a season, to the Spanish league for two months, then to the New York Knicks, which waived him before he’d even played a game.

His plans to start a production company in late 2015 were derailed by his very public Love Ranch episode mere weeks later, sending him into retreat, at first with the Kardashians, and then with friends after Khloe finalized their divorce in May 2016.

In recent years, Odom has been pushing himself back into the limelight, leading with his personal story as he rekindles his business ventures.

He started with his CBD company, Rich Soil Organics, promoting the herb as a wellness product, which he says helped his withdrawal from drug dependence. His experience with ketamine features in the new memoir he is currently promoting, called Darkness To Light.

Recognizing that, Odom said, has been painful, but he encouraged others battling with mental health issues and addiction that it’s worth it.

‘Open up your heart and your mind to getting better,’ he said.