Oldest Christian letter outside of the Bible: 1,700-year-old note discussing politics and FISH SAUCE proves not all early Christians were persecuted in Roman empire

A papyrus letter believed to have been penned by a Christian in 230AD has upended many long-held theories and beliefs about the Roman Empire.

It proves that not all religious groups were subjected to persecution throughout the Empire and that they could, at times, live in relative peace.

Sent between two Christian brothers, it is believed to be the oldest surviving letter example written by a person of the faith.

It features one brother regaling the other with stories of local sports centres, political gossip and a desperate plea for his favourite fish liver sauce,

WHAT DOES THE OLDEST ROMAN LETTER SAY?

‘I, Arrianus, salute you, praying that all is well as possible in your life.

‘[Since] Menibios was going to you, i thought it necessary to salute you as well as our lord father.

‘Now, I remind you about the gymnasiarchy, so that we are not troubled here.

‘For Heracleidas would be unable to take care of it: hehas been named to the city council.

‘Find thus an opportunity that you buy the two arouras.

‘But send me the fish liver sauce too, whichever you think is good.

‘Our lady mother is well and salutes you as well as your wives and sweetest children and our brothers and all our people.

‘All our people salute you. I pray that you fare well in the Lord.’

Professor of Ancient History at the University of Basel Sabine Huebner has dated, researched and translated the document.

Her analysis of the artefact, she claims, proves it is older than all previously known original Christian documentary evidence from Roman times.

The University of Basel has owned the papyrus, numbered P.Bas. 2.43, for over a century but its true backstory has long been a mystery.

The papyrus was found to have come from the village of Theadelphia in central Egypt and it is part of the Heroninus archive, which is the largest archive of papyri from Roman times.

The letter was written in Ancient Greek by a man called Arrianus for his brother, named Paulus, and experts say it differs from other preserved letters from Greco-Roman Egypt because of how Arrianus signs off.

Arrianus finishes by saying he hopes his brother will prosper ‘in the Lord.’ he uses a shortened form of the Christian phrase ‘I pray that you fare well ‘in the Lord’.’

Professor Huebner said: ‘The use of this abbreviation – known as a nomen sacrum in this context – leaves no doubt about the Christian beliefs of the letter writer.

‘It is an exclusively Christian formula that we are familiar with from New Testament manuscripts.’

The letter reportedly shows that Arrianus and Paulus’ parents were part of the local elite, public officials and landowners.

Professor Huebner said: ‘This is the oldest Christian autograph, the oldest original handwriting of a Christian that we have from the entire ancient world.

‘We know of course the letters of the Apostle Paul from the first century, but here we don’t have the originals, just later copies survived, not his own handwriting. 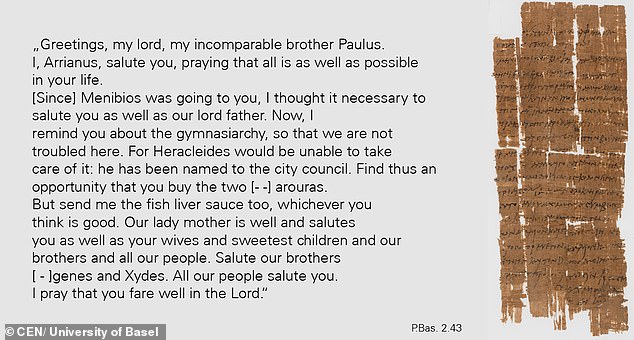 Papyrus sheet was researched, dated and translated by the University of Basel and it concluded the letter was sent between two Christian brothers in the year 230AD 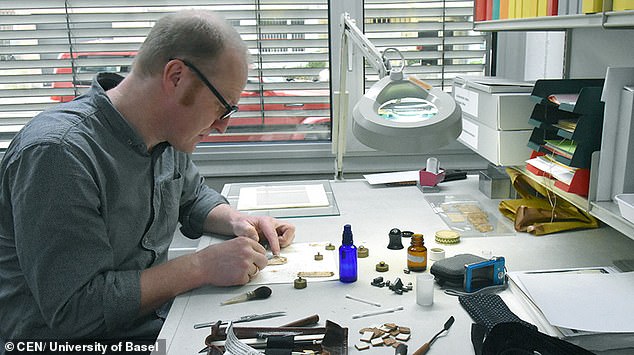 Prosopographical research was used to determine the age of the letter, which involves investigating the common characteristics of a historical group through a collective study of their lives as their individual biographies may be difficult to trace 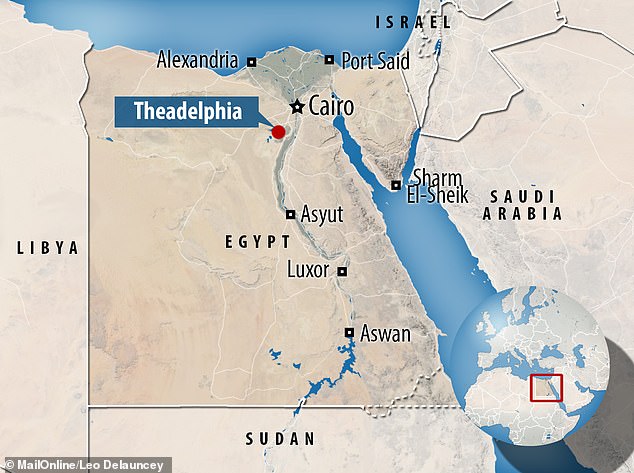 The papyrus was found to have come from the village of Theadelphia in central Egypt and it is part of the Heroninus archive, which is the largest archive of papyri from Roman times

‘However, the Basel papyrus is not the earliest Christian document altogether. We have the copies of the gospels on papyrus for instance, which might date already to the late second century.

‘But again, these are copies of the originals written by professional scribes, not necessarily Christians.

‘We also have other literature of Christians from the second century however these are literary texts transmitted via copying and copying through medieval times. Not the original writings.’

Prosopographical research was used to determine the age of the letter, which involves investigating the common characteristics of a historical group through a collective study of their lives as their individual biographies may be difficult to trace.

The Basel papyrus collection comprises 65 papers in five languages, which were purchased by the university in 1900 for the purpose of teaching classical studies – with the exception of two papyri.

These arrived in Basel back in the 16th century, and likely formed part of Basilius Amerbach’s art collection.

CHRISTIAN PERSECUTION IN THE ROMAN EMPIRE

Christians often were subjected to vicious persecution under the Roman Empire.

It was often on the basis of people refusing to accept Roman gods and it was believed this brought with it misfortune.

Famed ruler Nero is thought to have blamed Christians for the Great Fire of Rome in AD64.

After Emperor Decius decreed in AD250 that Christians must worship Roman gods, many were executed and others renounced their faith.

During the Great Persecution of the early fourth century, churches and Christian texts were destroyed and worship was forbidden.

It was not until the 4th century that Christianity was legalised and worshipping the religion allowed once more under the rein of Constantine the Great.

Alexandria and Antioch were homes to many Christians and it is here where followers of Jesus were first dubbed ‘Christians’.

Christianity saw a meteoric rise in popularity during the first and second centuries, with estimates indicating the ranks of the religion swelled by 40 per cent each decade.

The majority of its followers were Jews at birth who converted to the religion. 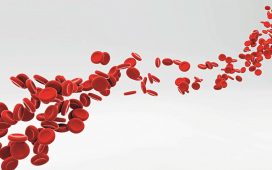 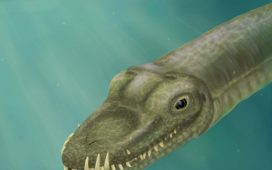 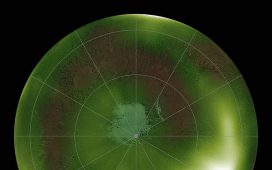