COPENHAGEN: Shipping group Maersk said it expects weaker 2022 global container demand growth on Wednesday, after moving fewer containers by sea in the second quarter due to worsening consumer confidence and bottlenecks at ports.

“Volumes in ocean (shipping) were softer as congestion continued and the war in Ukraine weighed on consumer confidence, particularly in Europe,” CEO Soren Skou said in a statement.

Maersk, seen as a barometer for global trade, said the number of containers it loaded onto ships fell by 7.4% in the second quarter compared with a year earlier.

The company, one of the world’s biggest container shippers with a market share of around 17%, revised its outlook for global container demand to the lower end of its range between minus 1% and plus 1%.

“In Europe, supply chain congestion remained as retailers and manufacturers kept containers in ports and warehouses due to weak final demand,” the company said.

That resembles the situation in the United States, where the country’s largest warehouse market is already full as major U.S. retailers warn of slowing sales of the clothing, electronics, furniture and other goods. On the supply side, Maersk said delivery times remained lengthy.

“It is still uncertain when capacity constraints including landside bottlenecks in trucking and warehousing will abate,” it said. While overall freight rates remained high in the second quarter due to congestion, Maersk said short term and spot rates declined in the period compared to the first three months of the year. 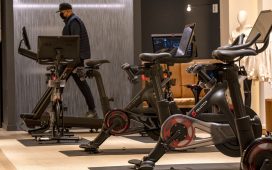