John Lewis and Mac Cosmetics have come under fire for advertising a “back to school” makeup masterclass on Facebook, in which school-age pupils were promised tips on achieving good-looking skin, and eyebrows “on fleek”, at the Mac counter in John Lewis’s Bluewater branch. Both the brand, which asserts that staff were acting independently, and the store, which says it knew nothing of the event, apologised and quickly cancelled the workshop after parents complained.

Few would disagree with the decision. An eyebrow pencil or foundation is incongruous and inappropriate in this context, and should not be billed as essential back-to-school kit, like some new lunchbox or protractor. Makeup is against uniform code in most schools and even where it’s not it’s very dubious to suggest that pupils should aspire to look a certain way on their return to an environment that should be about learning, and away from the real and escalating pressures to look good.

But the row has caused these legitimate concerns to be conflated with the question of whether young teenagers and children should wear makeup at all and if so, when, as if an eye palette is as wicked and harmful as a keg of snakebite and a carton of fags.

There is nothing inherently dangerous or provocative about pots, pans and tubes of colour, only about the prejudicial, problematic and patronising assumptions that society makes about them. Let kids of any age play safely and freely with makeup, turning their faces into whatever temporary pictures they like. It’s how adults then frame them that has the real impact.

Mac says it has a policy of never marketing its products to under-16s, and has never held a workshop for children, but many brands have. And these events are, in my extensive experience, a riot of little boys and girls flinging glitter about, daubing their faces in colour, drawing on clouds, drag queen beauty spots, rainbows, Harry Potter lightning bolts (I have the family pictures to prove it) and a load of other things an adult would neither think of nor recognise. Kids’ makeup workshops are not about our neuroses, politics, prejudices or fears. They’re about kids playing innocently and expressively, away from gender expectations, negative Snapchat comments and disapproving elders.

What made the proposed Bluewater event an uncomfortable one was not the notion of using makeup to experiment and transform – it was the implication that one must conform to a prescriptive ideal of beauty. This is a legitimate worry, but the industry is also awash with alternative, creative and rebellious beauty influencers and looks. RuPaul’s Drag Race has a huge teen following (at one drag makeup workshop I held in a department store last summer two teenagers – a boy and a girl – attended alone, but both were excited to be away from critical peers. They left delighted, alter egos conceived and finessed and pledging to perform publicly). For every identikit-contoured influencer, there’s an inspiring, rule-breaking makeup role model. From pink silk turban and false nail-wearing African American vlogger Patrick Starrr, to brooding, smudgy-eyelinered music idol Matt Healy, modern teens have long since expanded on their parents’ narrow beauty ideals. The world’s most watched teen makeup influencer is not a Love Islander or a Kardashian, but a rainbow eye-shadow, red lipstick, neon face-paint wearing boy named James Charles, who has just turned 20 and reportedly never had sex.

The involvement of big business in beauty makes many uneasy. Any makeup event is essentially a marketing exercise, whether aimed at adults or children. But while we as consumers should always be vigilant about the motives of big business, they don’t negate the crucial benefits of creative play (and besides, they exist in every child-centred industry – Lego, for example, does not become less educational because shareholders seek ultimately to shift bricks). The creativity, expression and artistry of makeup has huge personal and educational benefits, and can have a positive place in our schools. Heavy contouring and brows on fleek for term start? Absolutely not. But multicoloured eye shadow and lipgloss in art class? How does one sign up?

The John Lewis event was a misstep and inappropriate, and rightly shut down. But as parents, our responsibility to encourage a healthy self-image extends beyond forbidding attendance at makeup workshops. It involves not scrutinising – either negatively or positively – the appearance of our children (“You’re so beautiful and perfect,” people often say to their daughters, as if this is some helpful gift) and, as importantly, not constantly criticising our own faces and bodies at such a critical time in our kids’ development. This means not asserting that makeup is simply for girls to look prettier, younger or more attractive to men, but delighting in no-holds-barred indoor makeup sessions and the sheer pleasure of transformation for all. It means not obsessing over children’s natural instincts to experiment or even fit in, not despairing over their inexpert or ramshackle efforts, nor telling them they’d look so much nicer if …

Banning makeup in childhood isn’t healthy, protective, realistic or fair. Embracing it, however, can be beautiful. 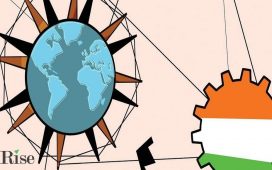