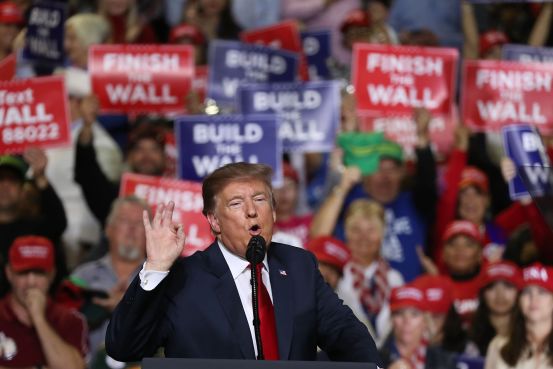 How many other people watched the entire 80 or 85 minutes of President Trump’s rally in El Paso, Texas, Monday night on Fox? The pre-rally expectation was that this event would be an effort to build support for the border wall. Instead, it obviously was a test-run of issues for the 2020 campaign, covering everything from A to Zzz.

At 9:55 ET, Sean Hannity cut away from the speech to denounce the border deal emerging in Washington. Then it was back to the rally’s remaining 40 minutes. It was strangely mesmerizing. Let me say this: Any Democrats with a stake in winning in 2020 should set aside their anti-Trump phobias long enough to watch that rally. Truth is, their candidate may not be able to compete with what this guy’s got.

Democrats who think the Trump rallies are just Mussolini-like stage events that will turn off most voters are talking themselves out of winning the election before it has begun.

Any disinterested person watching Mr. Trump in El Paso would have to admit that by now, with a lot of practice, he’s producing political performance art at a high level. Matching it will be tough.

With sustained energy and animation, he rolled through every imaginable administration accomplishment—the economy, taxes, energy production—even passage of the farm bill (“our wonderful farmers”).

He did antic riffs: “Is there any place that’s more fun to be than a Trump rally?” He invoked his target audience’s traditional values, and all of this with Trumpian shrugs, amazed head-shaking and dramatic pauses to let the audience’s energy build. (That said, Mr. Trump’s incitement of crowds like this one against reporters assigned to cover his events is abhorrent. It has to stop.)

READ  If Weed Is Medicine, So Is Budweiser

Now think of the list of Democrats competing for the party’s presidential nomination, put any of them in your mind’s eye in a one-on-one competition with Donald Trump—the debates, the campaign’s omnipresent media glare—and ask yourself: Which one them has what it’s going to take to stay in the ring with this personality?

I’m not saying Mr. Trump is unbeatable. I am saying that to beat him the Democrats are going to need a lot more than “Trump is the devil and we need Medicare for All.” And they’re going to need a candidate who does more than fill their identity-politics punch list. They need someone who can compete in public every day with the devil himself.

Ask an expert. Ask Donald Trump. He gave his answer Monday night in El Paso, stopping to mock “a young man who’s got very little going for himself, except he’s got a great first name.”

That would be Beto.

Mr. Trump derided Beto O’Rourke’s counter-rally in El Paso as attracting a few hundred people. “Not too good.” Well, it was a lot more than that. Mr. Trump also said something about this being “the end of his presidential bid.”

Despite being a recently obscure congressman from El Paso who last fall narrowly lost a Senate election to Ted Cruz, and despite no declaration of a presidential run, Beto O’Rourke is prominently in the national conversation. Why?

No one can quite figure out why, but crowds love him. Liberals thousands of miles away send him money.

The charisma needed to compete at the highest level of politics is hard to identify and often apparent only after someone has won. It isn’t just about being “likable,” a word currently obsessing the media. Politicians at every level know how to be likable. Many have what it takes to get elected to the U.S. Senate but not enough magic juice to reach the presidency. Joe Biden’s multiple failures at presidential runs come to mind.

The critic Robert Hughes once described modern art as “the shock of the new.” From Europe to the U.S. today, people want the shock of the new in their politics. Barack Obama delivered it, and Donald Trump delivered it. By November 2020, American voters may well want something newer than daily force-feedings of Trumpism.

This is not an argument that Mr. O’Rourke is on his way to the White House. Every day now is a chance to blow yourself up or be blown up. Nor is presidential politics reducible to personality. Policy and party will matter.

Mr. Trump’s El Paso rally should be a reality check for Democrats sorting through their limitless candidate list. Their opponent won’t be just “Trump” but an incumbent president. Progressives and their media affiliates can produce all the Trump fear and loathing they want. If their candidate can’t hold a stage with him, they won’t win.

With no growth, ITC could become just a dividend yielding stock

ITC continues to work with an 'open mindset' amid slowdown: Sanjiv Puri

Repco Home Finance expecting to maintain spread at 3% and a margin at 4.25%: Yashpal Gupta

NBFC slump is a crisis of confidence, says Ajay Piramal

A New Sheriff for Parkland