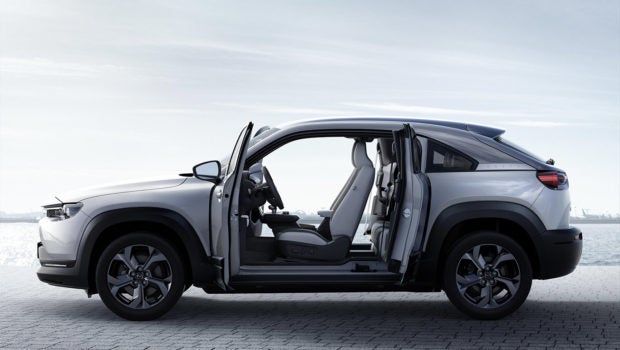 Here is the strangest EV story you are likely to read this week. According to Autocar, Mazda’s first all electric SUV, the MX-30, is being tuned by company engineers to drive exactly the same way the company’s ICE offerings do. No galloping gobs of torque for Mazda, no sirree! When an MX-3 driver steps on the accelerator, the car will move forward the way people accustomed to gasoline and diesel engines expect. We are not making this up, as Dave Barry would say. 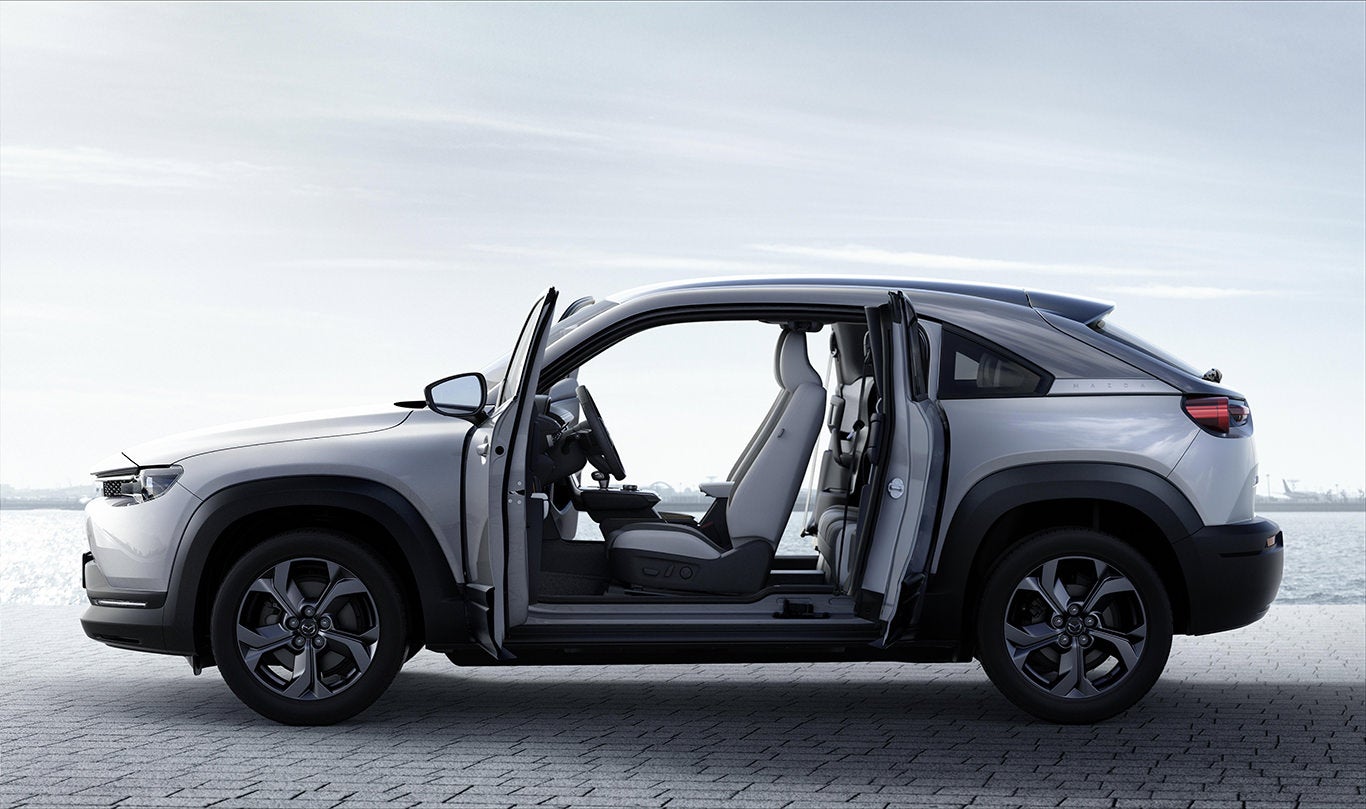 Here’s another bit of news. At a press introduction event for the MX-30 in Portugal last week, Joachim Kunz, head of product development and engineering at Mazda Europe, told the press the car will only come with a 35 kWh battery. Why? Because a study published last year by Hans-Werner Sinn, professor emeritus at the University of Munich and former head of the Munich IFO Institute, claimed that an electric car with a 95 kWh battery actually has higher carbon emissions than a modern diesel car on an extraction-to-disposal basis. A Japanese university published a similar study, and that’s why Mazda will never build a “big battery” electric car, Kunz said.

When it goes into production, the MX-30 will have a 35 kWh battery, a 141 horsepower electric motor, and 195 lb-ft of torque. It is expected to have a range of 130 miles (209 kilometers). Since the average European driver travels less than 35 miles (56 km) a day, that should be enough, Mazda believes. But for those who need more, Mazda will offer a rotary range extender engine that is small enough to fit in what we used to call the engine compartment alongside the motor and control systems.

The MX-30 is expected be available in Europe in late 2020 and in the UK in early 2021. Prices are expected to start at €34,000. Mazda says with its smaller, lighter battery, the MX-30 should be able to travel further on a kWh of electricity than competitors with larger batteries.

The Hans-Werner Sinn study, co-authored by Christoph Buchal and Hans-Dieter Karl, caused a firestorm in Germany when it was released. It claimed the lifetime emissions of an electric car — based on the current electricity mix in Germany — would be 28% higher than those of a diesel powered car.

That is exactly the opposite of what Frauhofer ISI found in its own study released last March. It reported “28 per cent less greenhouse gas emissions than a luxury class diesel, up to 42 percent less than a small petrol engine: Anyone who buys a battery-powered electric car today and uses it in Germany emits significantly less CO2 and other climate-relevant gases than a car with a conventional combustion engine over an average service life of 13 years.”

Stefan Hajek, editor of WirtschaftsWoche, decided to dig into the Sinn report and found significant errors that compromise the conclusions, beginning with the fact that it was not peer reviewed. Sinn and his colleagues “simply took the worst possible scenarios for the electric car and the best possible scenarios for the diesel,” he says, according to a report by Innovation Origins.

Hajek writes that Sinn used only NEDC laboratory values rather than WLTP numbers. Emissions for ICE vehicles based on the WLTP standard are about 40% higher than NEDC numbers. Electric cars are only 8% higher. Why Sinn and his co-authors used NEDC data even though “more accurate standards such as WLTP or EPA and even empirical consumption values are easily accessible for both vehicles, remains his secret,” Hajek says, Readers are free to draw their own conclusions.

Furthermore, the Sinn study assumes a battery life of just 150,000 km. It also adds the energy needed to produce the battery to the total emissions of the electric car but fails to add an equivalent amount for the engine, transmission, exhaust system, and exhaust gas cleaning systems required by a diesel powered car. Lastly, he ignores electricity from the grid derived from renewable sources. Can you say “hatchet job,” boys and girls? Yeah, we knew you could.

And yet Mazda has decided to stake its future on such bogus studies. If you own shares in Mazda, you might want to be in touch with your broker at your earliest opportunity.

I came across something else in my news feed today that may be pertinent to this discussion. Luca Ciferri, associate publisher and editor of Automotive News Europe, has penned a blog post dated January 11 which offers an overview of all the EV startups that have struggled or failed over the past decade. Even Mate Rimac, founder of Rimac Automobili, admits to Ciferri his company has “been on the brink” often and only gives it a 30 to 40% chance of survival. “Every year in Geneva a new company appears and then you never hear about them again,” Rimac says.

Ciferri then cites a research note sent by Bernstein analyst Max Warburton to clients recently. “The truth is, barriers to entry in autos remain high. Making cars is hard. The move to EVs will be expensive but will probably be led by traditional OEMs. There will be less disruption than feared.”

READ  READER LETTER: Electric cars to go over the Itchen for free, but are they all that great?

Ciferri ends by offering an opinion from an unnamed CEO of a recognized car company who tells him, “The financial markets were convinced that anyone could enter the car business and be profitable. This is a huge lie. This is a tough business for grown-ups, with very little room for kids.”

Ouch. How sharper than a serpent’s tongue, sir! CleanTechnica readers can probably imagine similarly dismissive language being heard in boardrooms at Nokia, Kodak, and Xerox just before the roof fell in.

Steve Hanley Steve writes about the interface between technology and sustainability from his homes in Florida and Connecticut or anywhere else the Singularity may lead him. You can follow him on Twitter but not on any social media platforms run by evil overlords like Facebook.