By Mary Kekatos Health Reporter For Dailymail.com and Associated Press

First lady Melania Trump says she is worried about the ‘growing epidemic’ of e-cigarette use among US adolescents and teens.

In a tweet on Monday afternoon, she called for action to fight ‘nicotine addiction’, but didn’t mention any specific plans.

‘I am deeply concerned about the growing epidemic of e-cigarette use in our children,’ she tweeted.

‘We need to do all we can to protect the public from tobacco-related disease and death, and prevent e-cigarettes from becoming an on-ramp to nicotine addiction for a generation of youth.’ 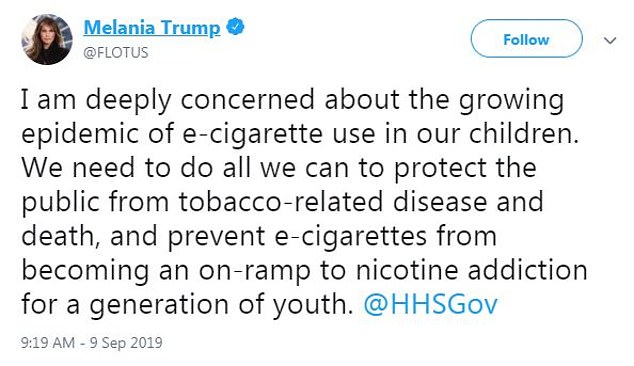 First lady Melania Trump tweeted on Monday (pictured) a call for action for e-cigarette use among US youth and to fight ‘nicotine addiction’, although she didn’t mention any specific plans

The first lady ended her tweet by tagging the Department of Health and Human Services, and garnered more than 26,000 liked and 5,600 tweets.

The tweet comes just days after US health officials urged Americans of all ages to stop vaping amid an investigation into hundreds of breathing illnesses related to vaping across the country.

As of Friday, there have been 450 cases reported in mostly teens and young adults in 33 states and one territory.

Kevin Bolclair, of Pennsylvania, and Walker McKnight of Florida, college students who began vaping in high school, are among the many who have been hospitalized after struggling to breathe on their own.

Five deaths, which have been suspected to be linked to vaping, have been reported in California, Illinois, Indiana, Minnesota and Oregon.

Last week, The Washington Post reported that federal- and state- level scientists said they believe an oil derived from Vitamin E found in cannabis vapor may be responsible for the lung damage in many of the illnesses.

President Donald Trump has not addressed the epidemic but, in March, he proposed adding a user fee to the e-cigarette industry as part of an effort to reduce teenage use.

On Monday, the Food and Drug Administration (FDA) blasted vaping company JUUL for illegally pitching its electronic cigarettes as a safer alternative to smoking.

‘The law is clear that, before marketing tobacco products for reduced risk, companies must demonstrate with scientific evidence that their specific product does in fact pose less risk or is less harmful,’ said Ned Sharpless, the FDA’s acting head.

‘JUUL has ignored the law, and very concerningly, has made some of these statements in school to our nation’s youth,’ he added.

The warning letter identified several problematic statements made by a JUUL representative speaking at a school at an unspecified date, including that the product was ‘much safer than cigarettes’ and that ‘FDA would approve it any day.

Use of e-cigarettes has surged since they were introduced to the US marketplace in 2007, according to the Centers for Disease Control and Prevention.

And they continue to be the most used tobacco product among US teens.

A 2017 report from the US Surgeon General found a 900 percent increase in e-cigarette use among young people between 2011 and 2015.

'Being unhappy with breast size could be risk to health'

How will we care for the dying when hospitals are stretched beyond capacity? | Brief letters

The Guardian view on Covid-19 and politics: institutionally vulnerable | Editorial

New measures to protect UK’s most vulnerable from coronavirus

Coronavirus: When is the virus at its most infectious stage? New study reveals all

What is coronavirus and how does Covid-19 virus spread?

Ignorance about menopause is destroying lives – and it’s not only women who suffer...

Type 2 diabetes: Add more of this carbohydrate to your diet to manage the...