Is Microsoft’s cloud growth a temporary blip, driven by the fleeting circumstances of the pandemic, or an enduring trend reflecting a larger change in customer mindset?

Wall Street is betting on the latter.

“Our June quarter checks for Microsoft upticked again as the Azure cloud growth story is hitting its next gear of growth in Redmond,” wrote Wedbush analyst Daniel Ives in a July 21 report. “We are seeing deal sizes continue to increase markedly as enterprise-wide digital transformation shifts are accelerating with CIOs all focused on readying their respective enterprises for a cloud driven architecture.”

The growth comes despite the Pentagon’s decision to cancel the $10 billion JEDI cloud contract that it had awarded to Microsoft, over the objections of cloud industry leader Amazon Web Services. The loss of that deal is likely to be a subject of questions from analysts during the earnings conference call with Microsoft CEO Satya Nadella and CFO Amy Hood. 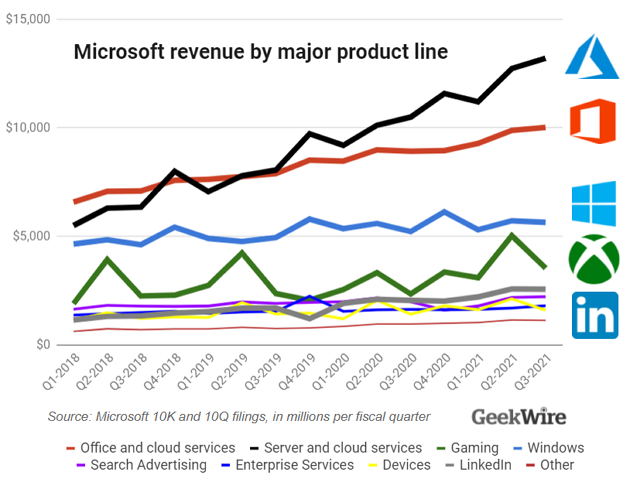 But the lasting impact of the cloud has become more clear in recent quarters.

These numbers come not from Microsoft’s standard earnings reports for its three big divisions, but from its filings with the SEC, breaking down revenue by “significant product and service offerings.” This is a better way to see trends in its product lines.

The takeaway is that Microsoft is seeing the most growth in parts of its business where it has been able to make the shift to cloud services and subscriptions. This helps to explain why the company is taking a new approach with the introduction of Windows 11 and its vision for Cloud PCs.

Check back with GeekWire on Tuesday afternoon for full coverage of Microsoft earnings.