The number of homes sold rose again in January to hit their highest in two and a half years and in a further sign that the housing market is picking up, official figures showed today.

Some 102,810 home sales transactions were recorded last month, some 4,080 more than in December and 5,120 more than in January last year, according to the latest figures from HMRC.

Those figures mark increases of 4.1 per cent and 5.2 respectively and January’s estimates are the highest since July 2017, when 103,220 homes where sold.

However, HMRC pointed out that transaction figures only settle after around three months, which means January’s figures reflect sales agreed in September and October. 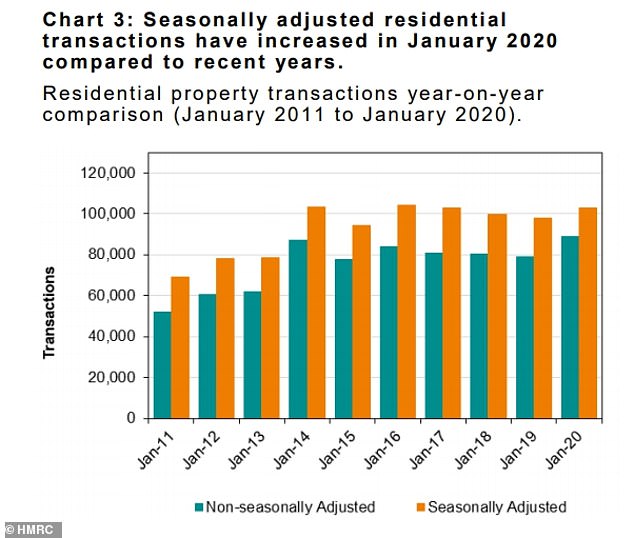 Some 102,810 home sales transactions were recorded last month, some 4,080 more than in December and 5,120 more than in January last year

Jeremy Leaf, north London estate agent and a former RICS residential chairman said the data confirmed a trend already highlighted by other surveys – that the market picked up even before December’s vote.

‘Transactions are always a better indicator of market activity than more volatile house prices,’ he said.

‘HMRC’s report is the latest in a series of recent surveys telling a familiar story – release of pent-up demand began even before the election, which we’ve noticed in our offices too.’

‘The increase in transaction numbers is particularly striking as they reflect sales which were agreed mainly in September and October. If they are like this now, numbers are set to be even stronger as we approach the peak spring-buying season.’

The latest official house price figures for December showed a slight revival in the property market before the election, with house prices rising in every region of the UK for the first time in almost two years.

Meanwhile, recent surveys have suggested that renewed optimism after the election, along with the return of potential buyers who had put moves on hold, has led to the traditional spring house hunting bounce arriving early. 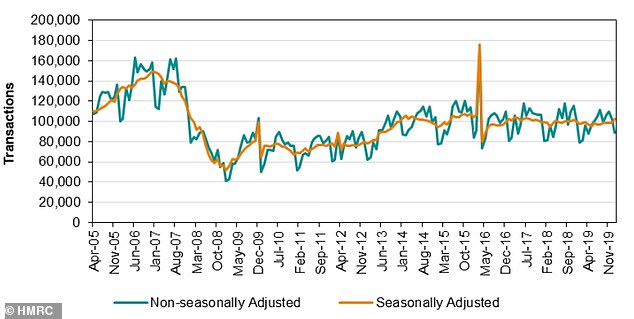 Although fluctuating, house sales have been ‘relatively stable’ over the past ten years

Estate agents and property listing sites Rightmove and Zoopla have reported an increase in activity after the election, although agents have warned sellers against getting overconfident and hiking prices.

Mike Scott of estate agency Yopa thinks the rise in sales will translate in higher prices. ‘We expect that this increased demand for housing will lead to house price increases in the first half of this year, as it doesn’t seem to be matched by any significant increase in supply,’ he said.

Although fluctuating, house sales have been ‘relatively stable’ over the past ten years, according to the HMRC.

READ  VICTORIA BISCHOFF: Never mind the 'Boris bounce'... saving should be made to pay

The data also show an increase in transactions of non-residential properties, like shops and offices.

Some 11,170 commercial properties were sold in January, up 10.7 per cent higher than in January last year.

Terry Smith: Fundsmith lived up to my hopes in the crash

​The week that was in 10 stocks: DHFL, Adani, Tata Power and jewellery plays