Lloyds Banking Group has unveiled overdraft changes that will see most Lloyds, Halifax and Bank of Scotland customers pay 39.9 per cent for borrowing, but some will be hit with a near 50 per cent rate.

The banking giant, which provides a quarter of UK current accounts, will charge some customers a higher rate of 49.9 per cent under a ‘risk-based pricing’ model.

The changes make Lloyds the last of the big four UK high street banks of Barclays, HSBC and NatWest to revamp their overdraft charges in line with new regulatory rules on borrowing. 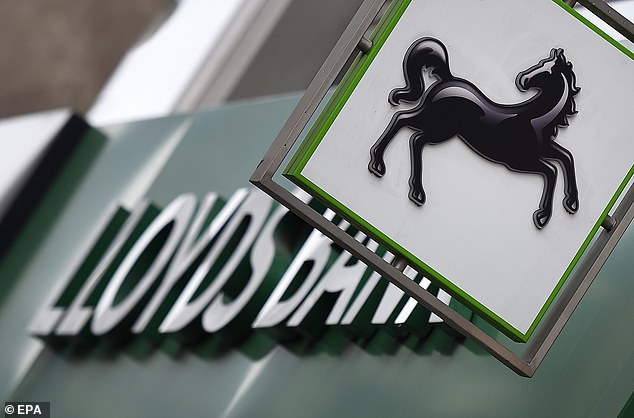 But critics say that the watchdog’s drive to get rid of the expensive £1 or 50p daily overdraft charges some customers faced has backfired, with overdraft rates for all hiked from about 18 per cent to 40 per cent.

All four banks have set the new cost of arranged overdrafts at at least 39 per cent APR, with NatWest and Royal Bank of Scotland setting theirs at a slightly lower 39.49 per cent, and the rest 39.9 per cent.

That almost all UK banks have priced overdrafts at close to 40 per cent has led to a backlash against the Financial Conduct Authority for rules designed to better protect those who frequently used unauthorised overdrafts.

The FCA changes prevented banks from charging more for unarranged overdrafts than arranged ones, and required banks to price the cost of dipping into the red as a percentage APR, to better allow consumers to compare their cost against things like credit cards and payday loans.

The FCA’s plan has backfired – but banks should be embarrassed

Simon Lambert, editor of This is Money, says: The Financial Conduct Authority’s plan for overdrafts was well-meaning, in that it wanted to stop banks hitting people with ‘simple’ £1 or 50p daily charges that were actually hugely expensive.

Unfortunately, the decision not to also cap rates has backfired, as banks and giant building society Nationwide have whacked up standard overdraft rates from just under 20 per cent to 40 per cent.

For many of these institutions this means the majority of their customers will now find overdraft borrowing more expensive.

The new sky-high overdraft rates are more than double the interest charged on standard credit cards – and far higher than the banks’ own cost of borrowing.

While your bank will charge you almost 40 per cent interest for dipping into the red, you will be lucky if it pays you 1 per cent on your savings.

These overdraft rates look more as if they are designed to protect profits previously been made on daily overdraft charges and unauthorised overdraft fees than help customers.

You would think that an industry still reeling from rampant PPI mis-selling would know better. Banks should be embarrassed by this.

Many banks previously offered overdrafts with usage fees and daily charges, which seemed reasonable but sometimes had APRs comparable to payday loans.

Before the changes last year, Lloyds charged 1p for every £7 borrowed.

Those changes meant anyone borrowing less than £4,100 would pay more.

Under the new rules, all Lloyds Banking Group customers will pay at least 39.9 per cent when they dip into the red, with the exception of its Club Lloyds customers, who will pay 27.5 per cent.

As well as the move to a percentage fee, Lloyds is also reducing the interest-free buffers available on some of its current accounts to £50, down from £300 in the case of its Ultimate Reward and Platinum accounts.

Lloyds said in a statement: ‘We are writing to our customers to explain the new overdraft rates that will apply from April 2020.

‘As a result of these changes, 90 per cent of customers with an overdraft will pay less than they do today.

‘The majority of customers will pay the APR of 39.9 per cent on most of our current accounts, 27.5 per cent on our Club Lloyds account.

‘Customers will be offered a personalised overdraft rate, up to 49.9 per cent depending on their circumstances.

‘We have not charged unarranged overdraft fees or returned item fees since 2017, and this will not change’.

Meanwhile former Lloyds stablemate TSB also announced it would raise the cost of borrowing on its Classic and Classic Plus accounts to 39.9 per cent.

What is Loss Aversion?